4
The Renminbi: A matter of trust
Home

The Renminbi: A matter of trust

Only a few years ago, there was much hype about the renminbi becoming the next significant reserve currency and potentially even threatening the dominance of the dollar.

Moves such as joining the IMF’s Special Drawing Right (SDR) currency basket, liberalising access to its domestic bond markets – among the largest in the world, and instigating swap lines with central banks were seen as steps towards that goal. As Prof Eswar Prasad of Cornell University argued in his 2015 book Gaining Currency: the Rise of the Renminbi, China’s goal was to use its currency’s rise to prominence as a tool for increasing economic and strategic influence in the world. Has that all come crashing down with the increased trade tensions between China and the US, and the COVID-19 pandemic, which seems to also be infecting relationships with the EU and countries such as Australia?

Perhaps the truth is that the notion of the renminbi challenging the dollar’s dominance was always fanciful hype. As Andreas Koenig, head of global FX at Amundi Asset Management, points out, while there were plenty of enthusiastic headlines about the growing importance of the renminbi, the reality has always been more prosaic.

Indeed, the renminbi share of payments on the SWIFT network of financial transactions has hovered at about 2% for the past four or five years, points out Van Luu, global head of currency at Russell Investments. “That figure is inconsistent with what you would normally think of as China increasing its share of the global economy and disappointing for China’s aspirations to internationalise the renminbi,” he says.

The most significant positive development in this regard has been the inclusion of the renminbi into SDRs in 2016. But even here, points out Nigel Jenkins, senior bond strategist at Payden & Rygel, it is still only ranked fifth, similar in size to the currencies of Australia and Canada.

As Nicolas Forest, global head of fixed income management at Candriam points out, today the renminbi remains essentially a national, rather than international currency although, as he admits, it only recently joined the SDR, so there has been a lot of catching up to do.

China’s economic growth is giving it rapidly increasing political weight in the globe but is this enough for it to create a leading reserve currency? Perhaps not. Several factors are creating the basis for a dominant reserve currency, according to Christopher Smart, head of the Barings Investment Institute. These include: the breadth and sophistication of the relevant financial markets; the reliability of legal systems when there is a disagreement; and the independence of regulators who can ensure fairness among parties. Ultimately, the key factor is confidence that money will be returned if it is switched into the currency in a crisis. 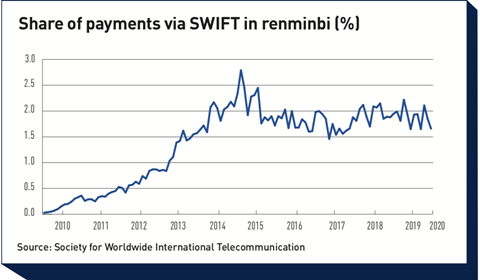 If the renminbi was never a serious challenger to the dollar’s pre-eminence, why is China promoting it? The answer may be that it served a useful purpose for China’s own leadership. The notion that a great economic power such as China needs to have a currency that matches its effect on the world economic stage proved to be a useful framework for economic reformers in China to pursue their agenda. It was a ‘Trojan horse’ strategy which, by getting China’s leaders to buy into the notion that a great economic power must have a great currency, impelled reforms which ultimately will be good for China, independent of what happens to the currency. This can already be seen in several ways. 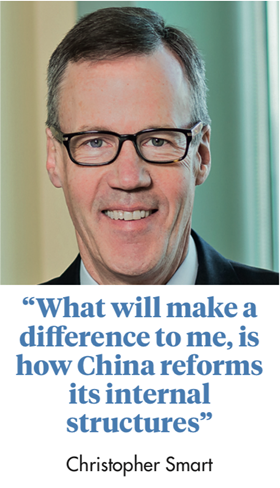 Perhaps the most important recent development has been the inclusion of China’s domestic bond markets into the major global bond indices. This includes the flagship Bloomberg Barclays Global Aggregate index starting to include Chinese onshore RMB bonds from April 2019 with a 20-month transition. “At the end of the process, China’s bond markets will have 6-7% weighting in the most widely used global bond index, which means that passive investors as well as active investors benchmarked to that index will be forced to allocate to China’s bond markets,” says Luu.

What of the future? China’s importance in the world is still growing but so are tensions with liberal democracies over a range of subjects. These include: transparency and responsibility for the COVID-19 pandemic; disputes over trade ranging from state subsidies to protection of intellectual property; aggressive moves in the disputed South China Sea; and, more recently, the imposition of stricter security laws in Hong Kong by mainland China. These are seen as in conflict with the 1984 Sino-British Joint Declaration of “one country two systems” for 50 years after the 1997 handover of the territory by the UK to China.

China’s recent actions in Hong Kong have emphasised that legal agreements may not always be honoured – not an action that inspires confidence along the lines that Smart indicated was required for a reserve currency.

From China’s viewpoint, the most dangerous development arising from the pandemic may be the recalibration of supply chains, as companies and governments seek security of supply at the expense of efficiency. These moves, though, points out Ewen Cameron Watt, senior adviser at Actis, started under President Barack Obama. “The COVID pandemic has accelerated these moves, but supply chains don’t change overnight,” he says.

The interdependence between the US and China cannot be unravelled easily, with China being a big purchaser of US Treasuries and needing to access the US market to sell its products. “China’s trade deficit with the US pre-COVID rested on two things, oil and Apple, alongside other tech companies such as Dell, Intel and Microsoft,” he says.

Will increased US-China tensions be the death knell for China’s ambitions for the renminbi? The emphasis on America First by President Donald Trump may have been an unpleasant shock to the world but whether the incumbent president wins or loses the next US election, the pandemic’s legacy means both the US and Europe will be seeking to reduce their supply chain dependence on China.

Such a move would reduce international trade and seriously damage the prospects for any growth of use for the renminbi. However, Forest argues, the US is pursuing an isolation strategy with the rest of the world, leaving the door open to China to take a more active role, particularly through its Belt and Road Initiative. “Only when the US forces the hand of other countries not to deal with China – as for Huawei and 5G – will China’s influence actually be blocked,” he says.

If China really does want to promote the renminbi as a reserve currency, what it needs to do, Smart argues, is to focus on its own institutions. These include its legal system, the independence of its regulators and the sense that the Communist party is at present the only adjudicator available.

He argues that to have sway as a reserve currency, owners of it will need to have the confidence that their money is not beholden to the whims of the current political leadership. Instead they want to be protected by a legal and regulatory system that is clear, predictable and transparent. “What will make a difference to me, is how China reforms its internal structures, rather than any artificial attempts to increase its weightings in the SDR or the creation of swap lines with central banks,” he says.

It is difficult to disagree with Smart’s analysis but even more difficult to assess when, if ever, his conditions will be met.