6
In search of the sweet spot

In search of the sweet spot

Low interest rates have been painful for unhedged DB pension funds. In the UK, where the first policy rate rises are expected next year, long-term yields could flatten further and magnify liabilities. Decisions about hedging ratios remain paramount, as Charlotte Moore finds

• There has been revolutionary change in the design of fixed-income portfolios generated by the popularity of liability-driven investment (LDI).
• Investors focus on managing interest-rate risk and use a more diversified, dynamically managed fixed-income portfolio.
• Under-hedged schemes would benefit from rates rising more rapidly than anticipated.
• Most recommend some interest-rate hedging to soften the blow of a continued low cost of borrowing.

Over the past seven years there have been revolutionary changes in the way many European pension schemes construct their bond portfolios – today’s typical fixed-income fund bears little resemblance to those before the financial crisis.

The main reason for this change in portfolio construction has been the adoption of liability-driven investment (LDI) strategies. As pension schemes need to pay out liabilities for many decades, effective management of interest-rate and – in the UK – inflation risk reduces the risk of funding shortfalls and additional contributions to plug deficits.

Indeed, as has been widely documented, LDI adoption has accelerated in recent years, spurred by the accountancy and regulatory regimes in various countries. The highest adoption of this strategy are in thosecountries that use a market rate to value the liabilities and the largest adopters have been Denmark, the Netherlands and the UK. 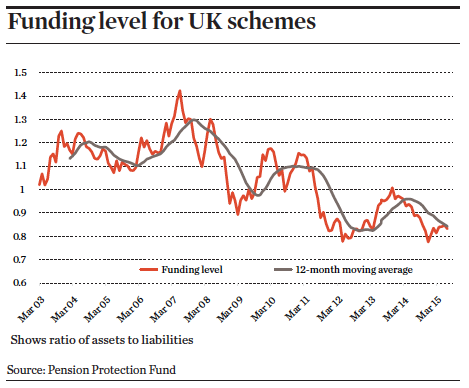 As other European countries start to adopt similar accountancy or regulatory regimes to those in the UK and the Netherlands, however, this strategy is gaining even more popularity. Jos Vermeulen, a director of Insight Investment’s Financial Solutions Group, notes the increasing use of LDI in Germany and Ireland in particular.

Adopting a LDI strategy radically re-shapes the way a pension scheme designs its fixed-income portfolio and the allocation to bonds becomes greater. “There is far more focus on designing a much more sophisticated bond portfolio,” says Tim Giles, partner at Aon Hewitt . “Before adopting LDI, the typical UK pension scheme bond portfolio would have been a mixture of mostly UK government and corporate bonds.” Bonds were usually a much smaller proportion of a portfolio, which would have typically been fairly evenly divided between equities and fixed income. 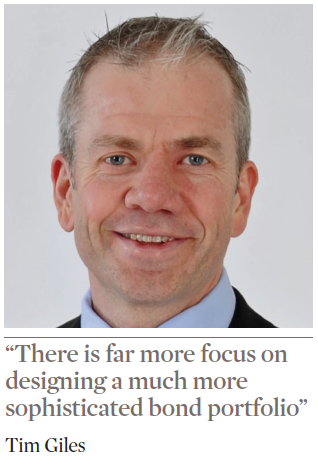 An LDI strategy should result in better management of interest-rate and inflation risk. The simplest way to achieve this goal is to buy more bonds, but current low yields make this unattractive. So rather than locking up much of the pension scheme’s capital in physical bonds, many pension funds have instead opted to use derivatives such as interest-rate swaps, which provide similar protection with much lower capital requirements. “That has allowed pension schemes to create more diverse fixed-income portfolios which are designed to deliver more efficient levels of return,” Giles notes.

This has often led to greater diversification of fixed income across regions with a broader range of instruments and wider credit quality. The diversification trend has been further exacerbated by the ultra-low-interest environment, which has promoted investment committees to think beyond their traditional allocations and fixed-income buckets. Initially, pension schemes diversified away from investment grade bonds into high-yield and emerging market debt, as John Dewey, managing director at BlackRock ’s client solutions team, points out. Floating-rate debt assets like loans have also proved popular.

Over the past year, however, that diversification has gone even further. “Some pension schemes have sought a more dynamic management of different fixed-income assets,” adds Dewey. “There will be periods of uncertainty when correlations could be quite high before new opportunities present themselves.” As returns in the more liquid parts of the market have evaporated, a growing number of pension schemes are looking to exploit less liquid fixed-income assets, including assets such as direct lending and other long-dated credit opportunities.

While pension funds might have opted for more sophisticated bond portfolios in search of higher returns, good portfolio design should ensure better protection against interest rates rises. Allocations to floating-rate investments as well as a broader range of fixed-rate assets of different durations will soften the blow of rates. Multi-asset fixed-income strategies are gaining in popularity, as David Milward, head of loans at Henderson, points out. “A multi-asset fixed-income manager has a range of different assets to choose from and so can find uncorrelated sources of return. The fund manager can both add and reduce risk, depending on the prevailing market conditions.”

Even though these portfolios are much better protected against rate increases, this is somewhat of a moot point. Dewey says: “For a typical pension scheme, the benefits of higher interest rates far outweigh the fall in the valuation of the bond portfolio.” In addition, the use of an LDI strategy will ensure that any duration risk in the portfolio is correctly sized, says Vermeulen. Pension schemes benefit from higher rates because it results in a lower valuation of the liabilities. As a pension scheme has to pay liabilities for many decades, this valuation is very sensitive to small changes in the discount rate. 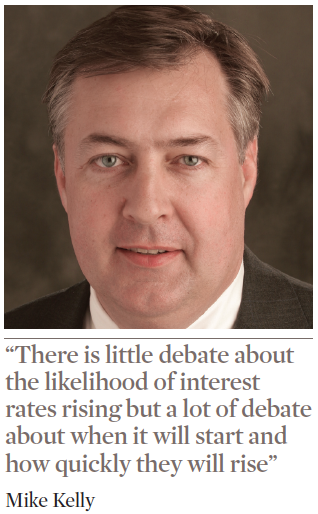 While most have increased their hedge ratio, few decide to fully hedge and many schemes have only partially hedged 30-40% of their liabilities. These under-hedged schemes have been heavily penalised by the long period of ultra-low interest rates, which has caused liabilities to balloon. The choice facing these pension schemes is whether they should increase their hedging ratio or simply wait for interest rates to rise.

It is tempting to simply wait for higher rates, as hedging this risk is expensive in a low-interest-rate world. But most investment consultants and asset managers think this is the wrong decision. “Many schemes that took this view have been burnt,” says Dewey.

While it is not an unreasonable assumption that UK interest rates will rise next year and well ahead of any European Central Bank (ECB) policy rate rise, the precise timing of that decision is difficult to predict. “There is little debate about the likelihood of interest rates rising but a lot of debate about when it will start and how quickly they will rise,” notes Mike Kelly, global head of multi-asset at PineBridge Investments.

It is unusual for this bet to pay off. Interest rates tend to rise more slowly, rather than more rapidly than the market predicts. This is due a behavioural finance quirk that comes into play when interest rates are at cyclical turning points. To compensate for the uncertainty over how rapidly rates will rise, the market will bake in several rapid rate hikes – in effect, there is a forward rate bias. 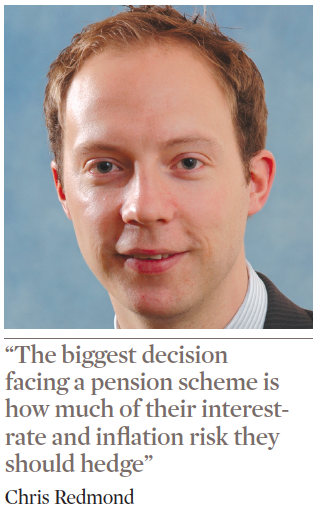 This cycle has conformed to the historical pattern of behaviour; Redmond notes that until recently the market was predicting a fairly steady pace of interest-rate hikes, a forward rate bias. But not many were convinced that the forecast was correct. “Given the existing debt burden and fragility of the recovery, it seems unlikely central bankers would rapidly hike the cost of borrowing,” says Redmond.

Recent concerns about the impact of the slowdown in China on the global economy, however, have caused the market to re-think its future interest rate assumptions. “The forward rate curve has flattened recently and, for the first time this cycle, this looks like a much more accurate forecast,” says Kelly. In the short term, this flattening of the curve has had a negative impact on UK pension schemes as longer-dated yields have declined – the discount factor used value their liabilities is derived from this part of the curve. As a result the valuation of the liabilities has risen once again.

However, pension schemes could benefit in the longer term if this trend continues. If the concerns deepen over the impact over the Chinese economy on global growth and the market starts to doubt whether interest rates will rise soon, the curve could flatten even further. In this scenario, it is likely that rates would rise more rapidly that the curve had predicted and under-hedged pension schemes should benefit.

“If a pension fund has hedged 50% of its interest-rate risk and the liabilities have a 20-year duration, then if interest rates move up by a percentage point more than the market predicts, this will improve the funding ratio by roughly 10%,” says Vermeulen. But Dewey urges caution, as it might be months or years before this happens, and pension funds and sponsors would have to endure more funding-deficit pain before the bet pays off. And there are no guarantees that this scenario will be the one that eventually unfolds. 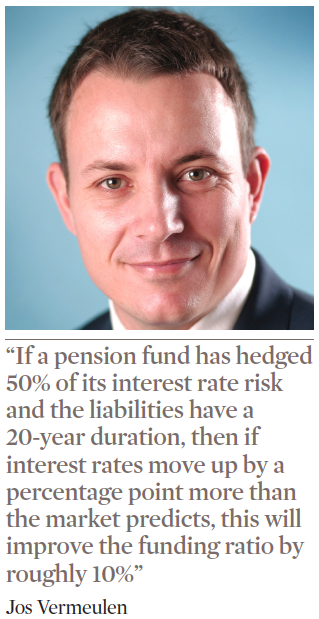 “We have consistently advised our clients to keep hedging to decrease the magnitude of the under-hedged position given its significant influence on risk, despite it appearing to be a relatively expensive investment strategy,” says Redmond. And the current shift in the interest rate curve does not change this advice, he adds.

“Those pension schemes struggling with the idea of increasing hedging when these instruments are expensive and rates are likely to rise should think of hedging as a continuum, rather than a binary decision,” says Pete Drewienkiewicz, head of manager research at the London-based consultancy Redington.

At one end of that continuum is no hedging, while at the other is the fully-hedged position. Drewienkiewicz says: “It’s possible for each scheme to determine what position it wants along that continuum.”

By hedging some but not all of the risk, a pension scheme can find the hedging sweet spot. The right proportion of hedging will soften the blow from low interest rates, while not being fully hedged will enable the scheme to benefit if interest rates rise more rapidly than the curve predicts.

While the scheme could determine the right level of hedging to match its particular needs, there is a rough rule of thumb. Drewienkiewicz concludes: “Even if a pension scheme has a very strong view that interest rates will rise more rapidly than the curve currently predicts, it should still hedge 50% of the liability risk.”