• India’s GDP growth rate has fallen below 7%.
• Long-term structural change is expected owing to tax changes, personal ID accounts and demonetisation.
• There has been a short-term hit to GDP growth, corporate earnings and consumer spending.
• Domestic savings have shifted into equity mutual funds.
• The banking system remains a key challenge.

Seven decades since independence and with a population of 1.3bn, India has become an economic force, like China, that investors cannot afford to ignore. This has not always been the case. Indeed, until the 1980s, post-independence India was saddled with a planned economy that led to GDP growth rates of 3.5% a year and per capita income growth of 1.3% – derided by onlookers as the ‘Hindu’ growth rates.

Today, there is disappointment that India’s growth rate has fallen in the last quarter to a mere 5.7% – below expectations of 6.6%. In 2016, the growth rate was 7.1%, beating China’s 6.8%. India’s economy still faces many challenges and its infrastructure may require a couple of decades of spending before it can emulate China’s. But there are strong arguments to suggest that India has made structural changes, which, despite short-term negative impacts, will ensure higher growth rates for years to come.

Although the government of Prime Minister Narendra Modi might end up taking the credit, two key changes have occurred that have been many years in the making. The first is Aadhar, a unique 12-digit number that creates a digital identity for more than 1bn people, enabling individuals to be rapidly identified using biometric data.

The second has been the introduction this year of the Goods and Services Tax (GST), a destination-based tax on consumption of goods and services.

These two radical steps were accompanied by the controversial ‘demonetisation’ that occurred in November 2016 when Modi announced that the high-denomination 500 and 1,000-rupee notes would be invalid the following day. Old notes would have to be put into bank accounts and exchanged for new ones.

Some 99% of the notes have been deposited in banks, so there has been little immediate gain from the exercise in terms of the hoped-for annulment of so-called ‘black money’ (undeclared income) held in high notes.

Demonetisation led to huge disruption in an economy where the informal sector accounts for a large proportion. Agriculture, which accounts for about half of jobs, was profoundly affected, with many farmers unable to sell produce.

Estimates of the negative impact of demonetisation on GDP growth range anywhere from 0.5% to 3% for the year. That, combined with the disruption caused by the introduction of the GST, has been a short-term blow to the economy.

It is also a contrast to the position a year ago, when the country was experiencing the benefits of a great monsoon after three years of drought, says Praveen Jagwani, CEO of UTI International, the offshore arm of UTI Asset Management Company, which manages $50bn (€43bn). 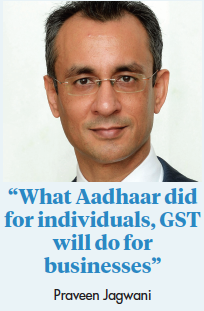 This year, Jagwani says, the monsoon has been decent, but not great. Inflation is just under 4%, so the central bank will not cut interest rates, and the corporate sector has cut back on spending as it digests the implications of the GST.

While there may be short-term disruption, many would agree with the view expressed by G Pradeepkumar, CEO of Union Asset Management, that the best in India is yet to come. Many of the steps the government has taken should bear fruit in a year or two.

The potential impact of Aadhar, demonetisation and the GST in the longer term – plus further reforms that the Modi government intends to push though over the coming year – are giving rise to optimism among asset managers and suggests that investor perceptions of India should be radically revised.

One important change is an expected dramatic increase in future tax revenues. Demonetisation and GST together are estimated to have increased the number of taxpayers by 20-25%, says Pradeepkumar.

The ubiquitous use of Aadhar means that all purchases can be tracked easily. Rakshit Sethi, CEO of Fair Value Capital India, an Indian value equity specialist manager, says: “In a country where the number of new cars bought every year is 2.5m, while the number of people declaring an annual income in excess of INR1m [€13,000] is only 2.4m, you will now no longer be able to buy that new car, or make any transaction over INR 50,000 [€650] without providing your Aadhar number. So it has become easier to determine where and if appropriate tax has been paid.”

This will make it extremely difficult to conduct business in the parallel economy. Demonetisation may have been disruptive in the short term but $30-50bn (€25-42bn) of wealth in the black economy is now in the banking system and can be traced. Sethi continues: “Around 2m account holders are under active scrutiny, with the Inland Revenue looking to see who were active taxpayers, how much income they declared historically and how much cash they deposited.” 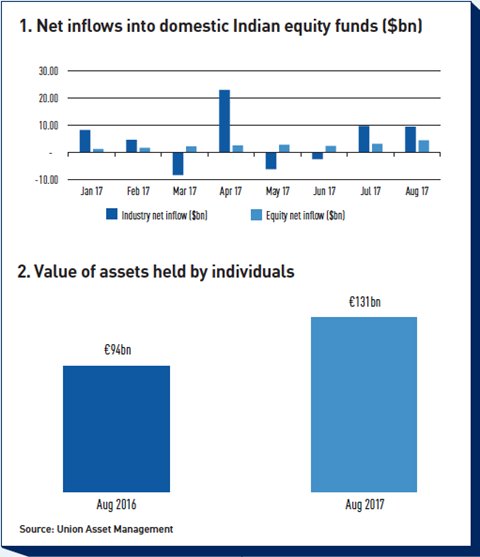 The impact of GST will be far-reaching, Jagwani says. The obvious and most widely touted benefit has been removing barriers to the free movement of goods and services throughout the country. It has also brought small and medium-sized enterprises (SMEs)into the formal economy through recognition of their existence as taxable entities. “What Aadhaar did for individuals, GST will do for businesses,” says Jagwani.

According to UTI, the GST is expected to boost India’s GDP by 0.8% to 1% over the next two to three years. The enlarged tax base should improve central and state fiscal budgets, thereby nudging the country towards a credit upgrade.

Another benefit will be that SMEs will need to maintain proper business accounts, allowing them access to debt finance and growth capital through future listings. It should also spur the creation of new technology platforms to enable firms to comply with GST – UTI expects more than 8m SMEs to engage with the government electronically.

Direct tax payments to banks will greatly reduce the incidence of corruption and will eliminate the current misallocation of business resources to tax avoidance, while real-time transactional data will give precise, reliable and continual insights into the health of the Indian economy.

Foreign investors may still be wary of India, but its stock markets have shot up in 2017, driven by domestic liquidity. Demonetisation has been the cause of much of this. Considerable money entered the banking system immediately after the process, and this was then reinvested into financial assets rather than cash and real estate, boosting investments in equities and mutual funds.

Pradeepkumar says: “In 2017, by the end of August, the Indian mutual fund industry had received the equivalent of more than $38bn of investments, out of which more than $20bn or 54% came in equity mutual funds. Inflows to mutual funds rose by 130% vis-à-vis same period last year.”

Regular inflows in mutual funds have grown to be nearly four times that of foreign portfolio investors and foreign institutional investor inflows, which stood at about $5.6bn in 2017 to end-August. “It is because of this that the market has been going up. If you look at the corporate earnings growth, it does not justify the current valuation of many stocks,” says Pradeepkumar.

If the future looks bright, there are still challenges. The most significant challenge in India today, says Pradeepkumar, is to fix the banking system. “Fundamentally, bank balance sheets need to be cleaned up. High GDP growth cannot happen if the banking system is not in good shape,” he says.

India’s new bankruptcy code is significant since, as Sethi says, it enables Indian banks to take over companies if they default on payments. This has already happened in a few cases, bringing about a salutary effect on others, leading some companies to sell off assets to pay off debt for the first time. But while private sector banks are doing well, the problems of the major state-owned banks, which dominate the sector, still need to be addressed.

For institutional investors, though, such issues should not detract from the underlying story that the long-term prospects of the Indian economy have arguably never looked better since the country’s independence.