• AMP raised $2.5bn (€2.1bn) for a strategy targeting mezzanine loans to infrastructure projects.
• There are several reasons why infrastructure credit is different from loans backed by property or asset-backed securities.
• Perhaps the most important is that infrastructure returns are almost exclusively dependent on the cash flows from a project that provides a critical service to the public.
• In North America most opportunities are in the energy sector.

There is no shortage of headlines about the need for private capital to help fund the building or refurbishing of infrastructure across the developed markets. And if Andrew Jones and his team at the Australian investment manager AMP Capital have anything to say about the matter, there will not be a shortage of capital either.

Last summer, AMP reached the final close on AMP Capital Infrastructure Debt Fund III (IDF III), which raised $2.5bn (€2.1bn) for a strategy targeting mezzanine loans to infrastructure projects. Commitments to the fund exceeded the $2bn target and were more than twice the amount raised for the previous infrastructure debt fund, which closed in late 2015.

Reflecting the popularity of infrastructure with institutional investors searching for yield, AMP secured commitments for an additional $800m in co-investment rights and a further $800m from investors seeking access to its infrastructure debt capabilities.

Perhaps the most notable feature of the new fund is that it will focus on mezzanine loans. Mezzanine loans stand between equity investors and traditional lenders in terms of credit seniority. While the mezzanine tranche occupies a relatively small portion of the capital structure, it is a position that can deliver relatively large returns to investors – for loans on which the risks are carefully vetted and are priced accordingly.

Andrew Jones, global head of infrastructure debt at AMP Capital, tells IPE why the fund will focus on mezzanine loans in developed markets, the critical differences in infrastructure lending that offer the potential for attractive risk-adjusted returns in the current environment, and where the business is headed next.

“Infrastructure mezzanine debt is growing in prominence among pension plans and insurance companies in particular,” says Jones. The asset class, he says, “appeals to investors looking for an attractive yield with capital stability”. 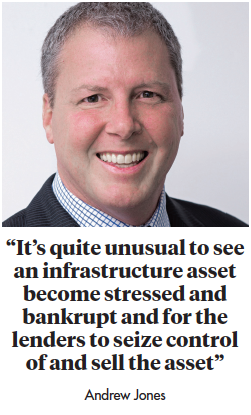 Several critical differences in the nature of infrastructure credit analysis distinguish lending in this sector from loans that are backed by the value and cash flows from property or the wide range of corporate-owned assets pledged as collateral for asset-backed security (ABS) issuance.

Foremost among those distinguishing factors is that infrastructure returns are almost exclusively dependent on the cash flows from a project that provides a critical service to the public. To the extent there is an asset generating those cash flows, such as a power plant, infrastructure lending resembles asset-based lending, which also typically occupies a junior rank in the credit hierarchy.

But the linkage to an ‘asset’ does not convey the key fact that there is no corporate balance sheet backing an infrastructure loan. “We don’t have a guarantee from a large diversified corporate entity that does things other than own infrastructure,” Jones says. “We lend against the cashflows of projects, so our analysis concentrates on the specific asset we’re lending money to.” The reason is simple: “if that piece of infrastructure doesn’t perform, we wouldn’t get paid.”

“We lend against the cashflows of projects, so our analysis concentrates on the specific asset we’re lending money to… if that piece of infrastructure doesn’t perform, we wouldn’t get paid”

This raises the second distinctive factor about infrastructure lending; the notion of looking at the price the asset could fetch in a pinch to provide a cushion against adversity is far less relevant than in traditional property or more liquid assets like aircraft, ships or rolling stock. “It’s quite unusual to see an infrastructure asset become stressed and bankrupt and for the lenders to seize control of and sell the asset,” Jones says. “These are assets providing essential services, generally, and at some point, the government will step in and say, ‘well hang on, we need to have a say in who owns our company providing water to people, or electricity or whatever the service might be’.”

Those credit characteristics go a long way towards determining the fund’s capital deployment strategy and underwriting process. The approach is time-intensive. The objective is to build a portfolio diversified by geography and industry sector which, in the context of mezzanine credit to infrastructure projects, means between 10 and 15 loans. “These are very resource-intensive loans,” Jones says. “We give ourselves four years to invest the capital we raise, and a typical investment can take six months to complete, so it wouldn’t be realistic to try and achieve the same levels of diversification that you might in an investment-grade fixed-income portfolio that might include 100 names,” he explains. “It is quite bespoke financing.”

In fact, AMP seeks to be the sole provider of mezzanine debt to a project, a position that enables the fund to structure loans that provide a suitable balance of risk and reward, which in turn justifies the infrastructure project paying a higher rate for the mezzanine portion of its debt capital. “In the majority of our investments, we are the sole provider of the mezzanine tranche,” says Jones. “We’re meeting a need for the infrastructure owner, and they’re prepared to pay higher returns for that.”

The goal is to strike the right balance between benefit achieved from the complexity – the cost of which comes from adding a tranche of subordinated debt to a project’s capital structure – and the potential volatility that can result from leverage. While there is no hard and fast rule about the optimal amount of mezzanine debt in the capital stack “the balance seems to naturally settle around the 10% mark, and that has remained very consistent”, says Jones.

The new fund is targeting a gross return of 10%, the same level as the previous fund. Jones is confident the AMP team can consistently generate returns of that order over long periods of time. One challenge is that “our capital is expensive”, says Jones, “and people look to repay it as soon as they can”.

To address that, loans include prepayment protection, generally for three to five years, after which capital can be returned. And during the four-year investment period, the 12-member team deploying the capital for IDF III is able to recycle any capital that is repaid into other loans. Loans typically carry a legal maturity date of seven or eight years, Jones says, and over the past 15 years, the average hold period for loans has been between four and five years.

“Investors have recognised the defensive characteristics of those assets, and they’re being sought out very aggressively”

Another source of confidence in the ability to generate consistent returns is that the opportunities in the market are consistent with what AMP has observed in the past. “The investment pipeline at the moment is probably as strong as it’s ever been, which is very encouraging,” says Jones. In October, IDF III closed a $200m mezzanine loan to Vertical Bridge, which is the largest private owner of telecommunications tower infrastructure in the US, according to AMP. When Jones spoke with IPE in September, the team was looking at several opportunities of about $300m, which he expected to be funded in 2017 if the transactions were closed. “Part of our thesis with raising a larger fund was that being able to deploy larger pools of capital per asset would open up more opportunities,” he says, “and that’s certainly proven to be the case.”

Most investments are found in larger developed markets. A typical portfolio will consist of about 40-45% European exposure, Jones says, approximately the same degree of US exposure, and a smaller allocation of between 10% and 15% in Asia. Asian opportunities have largely been in Australia, he says, although the team is “seeing a few more in Japan, Korea and Taiwan at the moment”.

In North America, most opportunities are in the energy sector, Jones says, including power generation assets using renewable technologies, as well as gas-fired generators. In those instances, AMP lends to operators that have long-term power purchase agreements with customers. In terms of sectors, Jones identifies renewables, both solar and onshore and offshore wind, as an attractive opportunity set in the EU. The most active interest in mezzanine loans in those sectors is from owners of existing portfolios that are seeking to refinance assets, or to obtain loan proceeds to acquire additional wind or solar assets.

Forward-looking infrastructure investors are showing keen interest in district heating assets, particularly in the Nordic region, Jones says. District heating is a system of sending hot water through insulated pipes from a central plant to heat exchangers that transfer the heat to a building’s heating system, eliminating the need for building-based boilers. The cooled-down water is returned to the central plant to be reheated and circulated back to heat exchangers. “Investors have recognised the defensive characteristics of those assets, and they’re being sought out very aggressively,” Jones says.

Even as his team conducts due diligence on prospective investments for the current fund, Jones has one eye on the future. Private capital will be needed to plug the gap between what governments can spend on infrastructure and the estimated need to build or replace critical assets – the G20’s Global Infrastructure Hub projects the 50 countries it tracks face a shortfall of $18trn by 2040, with the US, at $3.8trn, facing the largest gap.

A positive sign is that institutional investors are developing a healthy appetite for infrastructure, including higher-yielding strategies such as AMP’s mezzanine debt fund. Korean investors committed more than $300m to the fund, Jones says, and some Canadian pension plans – already experienced in traditional infrastructure equity investing – committed to the strategy for the first time. Jones estimates that the next fund is likely to be raised in 2019, three years from the first close of IDF III.

With some central banks moving, however gingerly, towards tighter policy, all debt markets face the risk of rising interest rates. But by conducting rigorous credit analysis, “our view is that we’re pretty well positioned, even if the cycle does turn”, Jones says. “We think that there should always be a place for a very stable 10% cash yield in people’s portfolios.”