Insurers’ expectations regarding the credit cycle, inflation, rates and equity returns have changed significantly compared with last year, according to a survey carried out by Goldman Sachs’ insurance asset management arm.

The annual survey – the asset manager’s sixth – captured the views of 317 chief investment officers and chief financial officers representing over $10trn (€9.2trn) in global balance sheet assets, roughly half the size of the total industry. It found that insurers had “dramatically” changed their expectations in several areas.

Presenting the findings to journalists, Etienne Comon, head of insurance asset management for Europe, the Middle East, and Africa at Goldman Sachs Asset Management (GSAM), said that in previous years the changes recorded by the survey have typically been incremental. He said: “We think there are really significant changes in attitude on the part of insurers.”

“The ‘backpedaling’ view on the credit cycle has seen an increase in corporate credit allocations with a third of insurers planning to increase their exposure to credit risk,” GSAM said.

On a net basis, 17% of insurers expected to increase credit risk, 7% were looking to increase equity risk, and 8% said they would increase duration. 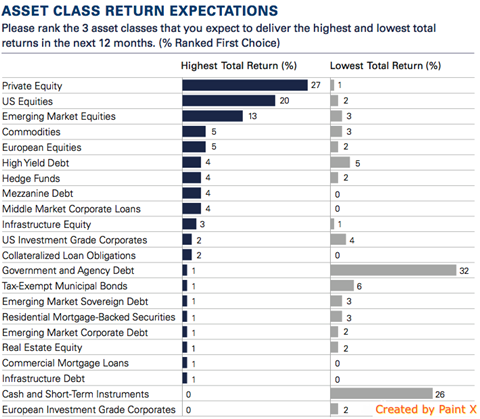 Asia Pacific insurers were the most optimistic, with 55% intending to increase credit risk. This was up from 31% last year, with Goldman Sachs suggesting this was primarily due to fears dissipating about a recession in China.

Private equity, US equities, and emerging market equities were expected to be the highest-returning asset classes.

This contrasted with last year’s survey, in which US equities and emerging market equities were among the lowest for expected returns, while insurers anticipated government and agency debt to be among the best performers. 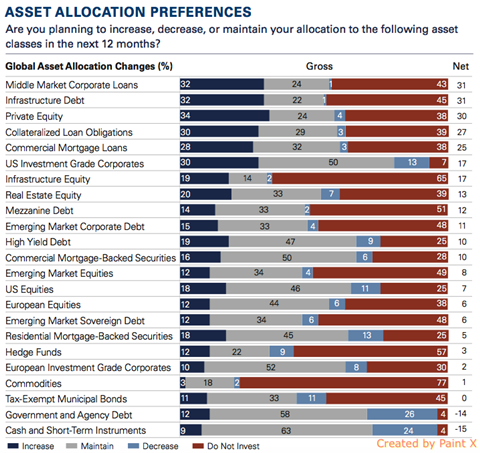 However, considerations about risk, governance, and capital efficiency meant that the asset classes perceived as offering the highest return opportunities were not necessarily the ones towards which the most money would flow, noted Comon.

Middle-market corporate loans, infrastructure debt, and private equity were the top three asset classes to which insurers anticipated increasing allocations, according to the survey.

Just over a third of European insurers anticipated increasing their allocation to infrastructure debt and middle-market corporate loans, 23% to real estate equity, and 21% each to commercial mortgage loans and infrastructure equity.