When Alan Rubenstein sat down at his desk on his first day as CEO of the UK’s Pension Protection Fund (PPF) in 2009, his in-tray must have been overflowing. 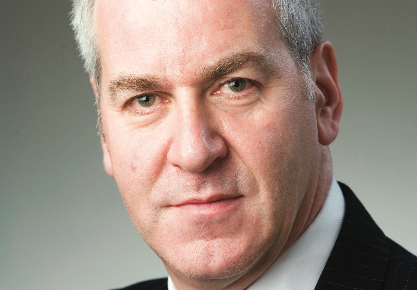 Four years after it was established as a safety net for the pension funds of bankrupt companies, the PPF was not in great shape. It had a long list of schemes waiting to be assessed for entry, was not processing them in line with its own targets, and did not hold enough assets to cope with all  of them.

As we sit down to breakfast overlooking London’s Borough Market, Rubenstein freely admits the PPF was a “slightly bloated organisation” at the time of his arrival. Far from putting his substantial investment expertise to work, he had to get up to speed quickly with the operational side of things.

The fund’s existing staff helped this process, he says. But the new CEO had to be ruthless at times, too: staff numbers were cut back to make the organisation more efficient.

Fast-forward to 2017 and the PPF’s staff numbers are back above that starting point and schemes are being processed faster. The investment portfolio is dramatically larger at £28.7bn (€32.2bn), compared with just £3bn in 2009; crucially, at the end of March, it recorded a £6.1bn surplus. 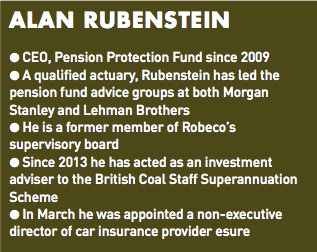 During this period, Rubenstein has become the public face of the lifeboat fund. He is a vocal supporter of domestic infrastructure investment, and was a notable presence in the early stages of the Pensions Infrastructure Platform, of which the PPF was a founding investor.

More recently, however, he has found himself in front of parliamentary committees more than once – most notably during the politicians’ attempts to extract cash contributions from the UK entrepreneur Philip Green to contribute towards the BHS Pension Scheme. Green eventually agreed a £353m settlement, while Rubenstein was the epitome of cool, calm and collected amid the political and media furore.

“The stories of people who go there [to the committees] to be tortured are legion,” Rubenstein says with a wry smile. “I always had the view that in neither of the inquiries I gave evidence to were they out to get us. They were out to find out information.”

BHS was far from a regular insolvency. Green’s payment means that the BHS scheme is able to continue outside of the PPF, but without a sponsoring employer the lifeboat fund found itself in uncharted waters. The PPF’s risk-based levy for DB funds depends in part on the strength of the sponsoring employer. What to do with BHS?

As Rubenstein explains, the PPF “had to think very differently”. The probability of insolvency “becomes irrelevant”, he says, when a scheme’s trustees in theory have the ability to determine when insolvency happens, as it is dependent almost solely on the investment strategy.

At this point, Rubenstein’s investment banking background comes to the fore, as he explains the option pricing methodology used to calculate the new type of levy.

“If you start off with a scheme that is adequately funded – which BHS will be – and has a reasonably conservative investment framework, then that scheme should be able to continue paying a relatively low levy,” he says. “If, however, the trustees get it wrong and the investment returns aren’t what they planned, then inevitably the risk to the PPF will grow greater and the levy will start to increase.”

The BHS trustees and the Pensions Regulator agreed (on the advice of the PPF) to operate with a series of triggers based on the scheme’s funding level. These are designed to manage members’ expectations and reduce the charge to the PPF should BHS’ investment strategy fail.

“Essentially, everybody’s agreed that if it gets to this level of funding then, rather than doubling down on black at the casino, we agree that we call time on it,” Rubenstein adds.

In the case of the £15bn British Steel Pension Scheme (BSPS), the situation is still fluid. More than 130,000 members must decide by March whether to stay with the current scheme and transfer to the PPF, or move to a new “BSPS2” with slightly reduced benefits.

Before the restructuring was formally agreed, commentators speculated on the PPF’s ability to take on a scheme of that size – with some even claiming that it would be a welcome ‘scalp’ for the lifeboat fund to claim. The PPF repeatedly dismissed such claims.

“I do find all these scaremongering tactics unhelpful,” Rubenstein says. “The gap in percentage terms between what you get as a member of BSPS2 versus what you will get in the PPF really does vary. In some cases it’s positive and in some cases it’s negative. There are people who will definitely be better off in the new scheme. After all, we’re underwriting that too.”

It is a tradition among departing US presidents to leave a handwritten note for their successor in the Oval Office, containing a word or two of advice and encouragement.

As he comes to the end of his tenure presiding over the PPF, what advice would Alan Rubenstein leave on his desk for the new CEO?

“Number one: you’ve got a great organisation here – please don’t break it. Number two: the battle for public perception is never won. You need to keep reminding people about what the PPF does, and why it’s so vital. Number three: don’t be afraid to think radically. The capacity of the organisation for change has surprised and delighted me over the years.”