Commodities: A boost for material benefits

Xiao Fu, the head of commodity market strategy at the Bank of China International, talks about what will arguably be the biggest infrastructure project the world has ever seen

Daniel Ben-Ami Could you give an indication of the scale of China’s Belt and Road initiatives?

Xiao Fu Many investors in Europe are aware of the idea but they’re uncertain about its size. It’s likely to be the largest infrastructure plan the world has ever seen. It will span several regions. Not only countries around China but also Central Asia, the Middle East, South East Asia, Australia (which will be part of the maritime route), Russia, parts of Africa, Central and Eastern Europe, South Europe and Western Europe. So it basically covers the entire Euro-Asia continent.

DB-A It’s clearly enormous but are there any other ways you can quantify it?

DB-A What is the likely impact on global trade and economic activity?

XF It’s difficult to quantify. The main idea is to build bridges – both literally and metaphorically – around those regions. It will include infrastructure projects such as gas and oil pipelines, power grids, high-speed railways, highways, ports and power stations.

Such projects will help to enhance connectivity across all the regions we’ve discussed. They will help boost GDP directly and there will also be a multiplier effect from trade and commerce along the route. 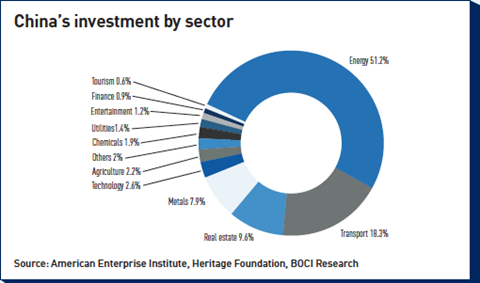 DB-A So, to take Indonesia as an example, it should help bolster economic growth?

XF Yes. Their first high-speed railway will be built jointly by the Indonesian government and a Chinese railway construction company. It’s a very densely populated country, so enhancing its ability to move people and goods will facilitate business and trade.

DB-A What is the time scale for the whole project? 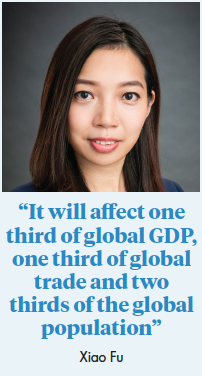 XF It’s not a one-year or two-year project but a 10-year or 20-year project. Now we’re only at the beginning. From 2013 when the initiative was first introduced, we really started to see the building projects from 2016 and 2017. In the last two years or so we’ve seen some projects going live. But this is only the beginning of the initiative which will run over the next 10, 20 or 30 years.

DB-A Could you give some indication of the impact on the commodities market?

XF It will have a phenomenal impact.

It will transform how China obtains resources from different regions. For example, in the energy space the Belt and Road will help to develop multiple supply chains. Russia used to ship natural gas to Europe and now they’ve diversifying to also ship it through Siberia to north eastern China. Another natural gas pipeline will connect Kazakhstan to China’s Xinjiang province. OPEC oil-producing countries have changed their strategy to look eastwards as China is their largest market. They all want to maintain their market share in the fast growing market. The Belt and Road will be building the oil pipeline and gas pipelines which will reshape global commodities trading. Both physical flows and also future pricing will move eastwards.

DB-A What does it mean for western investors? Presumably it has implications for them?

XF It depends on the type of investor. Some will look for a commodity where China is strategically short and willing to ramp up demand. Natural gas is an obvious example. Future demand is likely to increase substantially from its current relatively low base.

DB-A So there is likely to be substantial growth in global demand for many key commodities?

XF For metals and iron ore, mostly via building and construction. Power grids are very copper-intensive. And if you build roads and railway infrastructure and ports you will need steel, iron ore, coal and energy. In aggregate it’s a net positive for commodities demand.

Commodities: A boost for material benefits