Exit interview: EIOPA’s Bernardino on industry defensiveness and where to take IORP II

At the end of March, with his successor as yet unannounced, Gabriel Bernardino will step down as chair of the Frankfurt-based European insurance and occupational pensions supervisor after 10 years in office. He was there from the very beginning, building up EIOPA from the Committee of European Insurance and Occupational Pensions Supervisors as one of the three supervisory authorities in the European system of financial supervision that came into operation in 2011.

That, and previous roles, has given the Portuguese actuary plenty of time to get to know the pension fund sector and one of his take-aways may or may not be easy for it to swallow.

Speaking from Lisbon, he tells IPE he enjoyed the engagement with the sector over the years, and “there is a common interest in making sure that pension funds will get more relevance”. At the same time, “sometimes I felt that the pension industry was too conservative and sometimes mostly defensive – not so much able to see the possibilities that change could bring”.

“And that is something that I hope will improve with the years.”

The defensiveness is “a natural human reaction”, also taking into account that pensions regulation is predominantly national but EIOPA has a European perspective, says Bernardino.

“You always agree with change provided that the others change, but to build common European standards, everybody needs to change.”

Overall, Bernardino is “quite happy and proud” of the work EIOPA has done.

“This is due to a group of very committed, very ambitious people, and especially also people with a European mindset and always thinking that what they’re doing can have an impact in society in terms of protecting the citizens, protecting the consumer, and protecting the stability of the system,” he says. 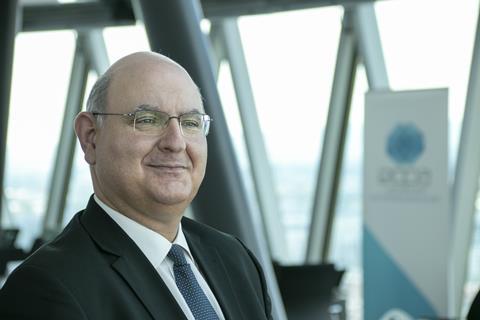 As arguably befits a regulator, EIOPA has not been afraid to ruffle feathers, and Bernardino is clear that “what I wanted to create at EIOPA was an authority that would have an independent mindset, its own European view, and that that would give us credibility”.

“You may agree or disagree, but I think we have achieved that. I think we have a voice, we have an independent voice. I think we are credible and respected and that everybody nowadays can say EIOPA is capable of confronting the challenges. It can bring reality to the discussions even when reality is difficult to assess, and it comes with proposals and at the end also acts. I think those have been the most important elements over the years.”

The reference to ‘bringing reality to the discussions’ is a reference to the approach EIOPA took to valuing defined benefit (DB) promises in the context of its sector stress tests. The pensions industry clashed with EIOPA over these, fearing the introduction of solvency requirements even after the European Commission had dropped plans to put pension regulation on similar footing to that of the insurance sector.

Bernardino defends the stress tests, but also says that for him, the discussion about solvency funding in DB pensions is “mostly a legacy issue”.

“It will still be there for many years, of course, and we believe at EIOPA that we need to confront it in order to have a good understanding, especially in this low interest rate environment, but there aren’t many DB pensions being built now,” he says.

What is not a legacy issue is how pension funds have been dealing with the coronavirus crisis and associated market turbulence, and Bernardino says this is much better than what would have been the case if the revised IORP Directive had not introduced stronger governance and risk management requirements.

“If you look at the reality of implementation of the Directive, also due to the opinions that EIOPA put out about our expectations, for example in terms of own assessment of risk or transparency, we see many member states and many pension funds acting on this,” he says. “Unlike with Solvency II, which is a maximum harmonisation regime, with the IORP Directive we have been taking a more bottom-up approach, and successfully I think.”

An area of pension activity that has not flourished under IORP II is that of cross-border pension provision. Bernardino says he is not surprised, and he appears keen to deliver a clear message on this subject.

His advice for those who want to realise the conditions for efficient, effective cross-border management of pension funds is to eschew incremental change in the form of adjustments to the IORP Directive and to instead pursue “a paradigm change – simplify the regulation, simplify the supervisory procedures”.

For Bernardino, the way to achieve this would be with a pan-European occupational pensions framework.

This would not be imposed, but something that companies throughout Europe looking for benefits of scale could choose, says Bernardino.

“I think that needs to be the approach, but it needs stakeholder support. A good number of multinationals are very supportive of this, but there are parts of the established industry that are not so keen on this. And we also need political support on this.”

There is a link to his previous point about conservativeness in the industry.

“I think this is an area where the current industry needs to go beyond looking just at what is possible right now to thinking about what the bigger opportunities would be with a pan-European occupational pensions framework, and the importance that would have to the EU economy and to EU citizens in terms of pensions adequacy.

“So I think the time is now, and I hope that there will be much more openness.”

“Cross border activity, be it cross-border pension funds or cross-border business, is not an objective per se”

A concrete suggestion he has for helping bring this about is to engage with and bring to the table those who would directly benefit the most, for example multinationals.

An awareness that Bernardino seems to suggest one should always have in mind when thinking about cross-border activity is that it should not somehow be seen in competition or at odds with the national.

EIOPA worked on a pan-European occupational pensions framework a few years ago but put the project on hold due to a lack of appetite from stakeholders. 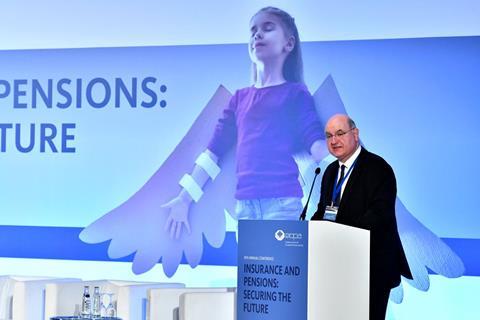 On the personal pensions side, there will now be a pan-European framework in place, with the European Commission having approved EIOPA’s regulatory technical standards in December. The asset management industry was quick off the mark in issuing a warning that the pan-European personal pension product (PEPP) would be “stillborn” because of a decision to include the initial cost of advice under the 1% fee cap for the Basic PEPP.

Bernardino acknowledges there are cost effectiveness issues, and notes that EIOPA pointed to the possibility of amortising initial costs over a five-year period. He says the PEPP will “flourish someday for sure,” but also points to conditions for its success.

One is what potential providers in the different sectors – insurers, asset managers, pension funds – do in terms of product development and innovation. A second is the voicing of demand by European citizens and consumer groups. Thirdly, there is the known issue of taxation by member states, who would need to give the PEPP at least the same treatment they give to other retirement savings products in their country.

“If these three conditions are met I think the PEPP will be a success,” says Bernardino, adding that digitalisation will help reduce costs and facilitate more long-term investment and investment in equity-like instruments, with the prospect of higher returns. There could also be a focus on environmental, social and governance (ESG)-related investments, “because that’s where the future is”.

“So yes, I’m still very positive,” says Bernardino. “I think the PEPP can be a quality label in the pensions area, like UCITS on the asset management side.”

The PEPP delegated acts are currently with the European Parliament for scrutiny.

What next for IORP II?

The European Commission is due to review IORP II by January 2023. EIOPA will be starting to tackle work related to this this year, and Bernardino is ready with his pointers for the way forward. For starters, there needs to be a clear definition of the review’s objectives, which is very often not the case, he says.

He mentions four main priorities. Firstly, to facilitate the setting up of occupational pensions by embracing digitalisation. Secondly, to have a clear focus on defined contribution pensions “because that is the future”. Third is the cross-border workplace pensions issue – “remove the barriers to create efficiencies throughout Europe in the internal market through having a pan-European framework that will allow companies to centralise the way they invest their pension funds with clear economies of scale”.

“This will go along the line of what the societal move is, and pension funds, through their stewardship role, making sure that the real economy takes steps to transition to a greener economy”

The fourth objective Bernardino frames as being about “future proofing” pensions, and is effectively an ESG-related pillar of envisaged changes. The gist is that pension funds should be required to consider the environmental and/or social impact of their investment activity as well as the implications of environmental, social or governance factors for their investment portfolios.

EIOPA has already suggested this to the European Commission as part of its submission to the latter’s consultation for its new sustainable finance strategy.

“There is this dual role of pension funds that is not in the IORP Directive now that I think would be very important,” says Bernardino. “And this will go along the line of what the societal move is, and pension funds, through their stewardship role, making sure that the real economy takes steps to transition to a greener economy.”

He emphasises, perhaps anticipating pushback or at least a challenge from the industry on this point, that this is not about stipulating what kind of assets investors should invest in or not. The rules would also need to be proportionate, especially with respect to small pension funds.

He is clear that everyone, including pension funds, have a role to play when it comes to questions of sustainability. It is the right thing to do, he says, from a societal and business perspective, and “I think it will be a win-win”.

As to Bernardino’s next steps post-EIOPA? He plans to “take some time off and see what the future brings next”.

2002-2006 – Member of the solvency and actuarial issues sub-committee, International Association of Insurance Supervisors