While no experienced investor would presume plain sailing in markets, the nervous and chaotic start to this year has been pretty remarkable and difficult to navigate safely. Although anxieties emanating from China’s stock market were initially at the centre of the market volatility, the tensions have inevitably spread across the world with risk appetites swinging wildly.

The outlook for economic growth in China is still poor, with manufacturing growth having declined to its slowest pace since the early 1990s. And there has been significant selling pressure on the Chinese currency, as depleted central bank reserves show.

There is also plenty of focus on the trajectory of the oil price and the might of the dollar. There has been for some time a strong inverse correlation between the dollar and the oil price, as arguably the strongest driving force at the moment is the shifting of excess savings from beleaguered emerging markets to the US. Oil is suffering from huge over capacity as well as a large demand deficiency as China and other Asian economies try to rebalance their supply-driven economies.

Economic data from the US has been mixed, and perhaps more disappointing than expected. Some of this may be weather related, but what is inescapable is the fact that headwinds from markedly tighter financial conditions in the US – despite lower government bond yields – could seriously impact future growth.

As well as the strengthening currency and weaker stock markets, US corporate spreads have widened across the board. The near-extreme highs witnessed in the high-yield energy sector in particular are greatly oil-price influenced. But the extent of spread widening in the rest of high yield suggests that it is not just spillover from the oil price, but may also include an increasing risk premium reflecting the deteriorating credit conditions, such as rising corporate debt. In fact, credit spreads in the US are at recession-indication levels.

Dovish comments from the Federal Reserve acknowledged this tightening of financial conditions and hinted that it was in wait-and-see mode about the economy’s resilience regarding future hikes. The Fed has been pretty good at giving clear guidance. For so long the market waited for the Fed’s guidance on its change in interest rate policy. However, what recent events have brought into focus is that the Fed does not have sole charge on its market liquidity. 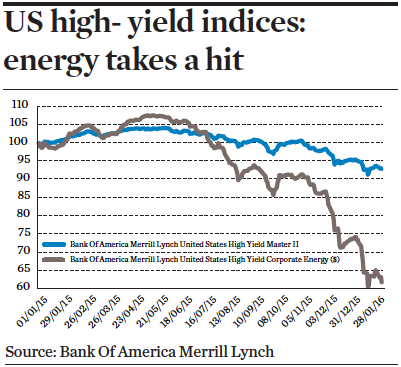 Although many forecasters might have indicated a flattening of the yield curve once the Federal Reserve started withdrawing liquidity, rapid falls in government bond yields across the curve were not quite what the majority of forecasts had in store for the new year.

Credit and equities seem to be moving very closely with the oil price. In the past, this has been a sensible investment connection with falling oil and commodity prices heralding slowing economic growth.

This time, however, the oil price fall is perhaps less a demand-collapse indicator but more to do with excess supply, as well as possibly a milder winter. Economic data from the US have disappointed, but could this be just another mid-cycle pause? How near to recession is the US economy?

Just as the US Treasury curve has bull-flattened over the past few months, so its credit counterpart has steepened. The curve (in US investment grade) is now far steeper than in previous growth scares over the past five years, implying that perhaps there could be value at the longer end.

With the Bank of Japan having taken markets by surprise with negative interest rates, focus turns again to what the European Central Bank (ECB) will do next. Expectations are for a dovish outcome, particularly if the ECB extends its public sector purchase programme purchases beyond March 2017, which could support narrower periphery spreads. These have been under some pressure from the risk-off environment as well as heavy supply calendars.

The Brexit story might have garnered rather more headlines had financial markets not been so pre-occupied with high volatility across all markets. However, the referendum on Britain’s membership of the EU was eventually going to hit the headlines, not least because the vote looks more likely to be sooner rather than later.

Sterling’s trade-weighted value has weakened since the latter part of 2015, which ought not to have surprised many given a more dovish Bank of England, a surprisingly hawkish ECB, a rate hike from the Fed and the global economic growth worries.

What is most tricky to ascertain is whether there is any sort of Brexit risk now being priced into the pound. There are plenty of sterling bears who argue that the currency’s downside, should the UK vote to leave, would still be significant, pointing to the economy’s perennial problem, its current account deficit.

Mention has to be made of the Bank of Japan’s (BoJ) rather surprising move to negative interest rates. There is much debate as to both whether the BoJ would like to see its currency weaken and if negative rates will have that effect. For several European central banks, like the Swiss National Bank, negative interest rates did accompany the currency lower.

Although the BoJ appears to be embarking on a ‘beggar thy neighbour’ currency devaluation, there is some scepticism as to whether this particular tactic will work. Japanese bank profitability is already under huge pressure, so it seems that to shield the banks from more pain, this negative rate will not be applied to most commercial bank accounts.

The largest owners of Japanese investments are domestic Japanese investors. The prospect of negative rates is certainly unappealing to investors throughout the world, but it is hard to envisage waves of selling by domestic investors accompanied by wholesale (unhedged) buying of foreign currencies and assets.

Focus: technology and the economy

The annual gathering at the World Economic Forum in Davos came and went without much drama this year, although the global economic backdrop is hardly cheering. The main theme was Mastering the Fourth Industrial Revolution, which invited debate about the impact of technological advances on economies and society.

Researchers at Citi and the Oxford Martin School, part of the University of Oxford, have been studying the global challenges of this century, also on a technological theme. The reports* have sought to analyse the implications for employment – and some of the findings are dramatic.

Current measures of productivity have been found to be inaccurate and thus underestimate reality. They also argued that the forces of technological advance are still disinflationary, which could mean that lower interest rates will be around for much longer.

The researchers also argue that the pace and scope of technological change has accelerated, and that the benefits are not going to be widely shared, with inequality already increasing. So many tasks – such as driving a car or reading handwriting – completely dependent on human input until recently are being replaced by machines.

Indeed the authors conclude that nearly half of US jobs are will be risk from future automation, and maybe three-quarters of the current jobs in China.