3
Trade war: The silver lining in the clouds of trade war

Trade war: The silver lining in the clouds of trade war

The game of beggar-thy-neighbour between the US and China is working to enrich some of the latter’s near neighbours, and others further afield.

“It’s a net gain for Asia,” says John Malloy, co-head of the emerging and frontier markets team at RWC Partners. He says that the challenges Chinese companies are facing is bolstering prices of chips from Korean firms such as Samsung and Hynix. Taiwanese producers are also benefitting.

This is basic trade economics: if you increase the costs of trade between two parties, then others on the margin suddenly become viable. And this is what is happening throughout emerging markets (EMs) as the deck reshuffles, with companies both mitigating losses and taking advantage of new opportunities resulting from the kerfuffle between the world’s two largest economies.

“There have been EM beneficiaries, with some manufacturers moving from China to other countries,” says Chetan Sehgal, lead portfolio manager of Templeton Emerging Markets Investment Trust. He points to Vietnam: “A beneficiary, particularly with tech assembly for export. This has also encouraged the development of India’s mobile phone market, although with a more domestic focus. Bangladesh, Indonesia and Cambodia have all seen an acceleration to their textile industry, though this was something China had lost competitiveness in quite some time back.”

Malloy also gives the examples of textile companies moving out of China, with the winners being Bangladesh, Sri Lanka and Vietnam. 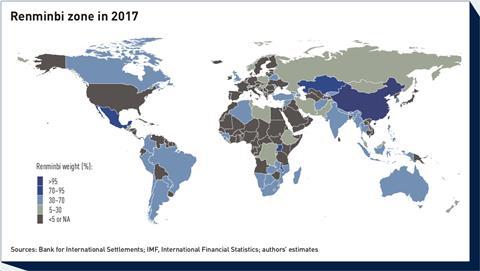 Faster not newer
The trade war has certainly shifted the parameters in which large transnationals do business. “Up

until a year ago, when our geopolitical advisers talked to big multinationals, it was all China, China, China,” says Malloy: “Now they are looking for options in Vietnam, Indonesia and the Philippines. Samsung has been investing in Vietnam for some time, and US tariffs are likely to accelerate this.” 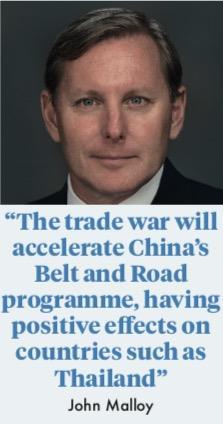 This is more of a quantitative rather than a qualitative change, as Sehgal explains: “Especially from a company perspective, the effect has not been as bad as many have predicted. People have seen this brimming up over the past 18 months and have had time to work on a plan B.”

So, for the main part, this isn’t a new trajectory but the speeding up of an existing process. “This was happening anyway, as China moves up the value chain,” says Sehgal: “In that sense, it’s been similar to the earlier development of South Korea. This natural progression has been accelerated by the tariffs. The trade war hasn’t resulted in a break in production patterns; more a continuum.”

These impacts from tariffs are being felt much further afield than China’s immediate neighbours, not least in Latin America. “As a result, we’ve seen imports into the US of a Brazilian motor manufacturer become more competitive,” says Sehgal.

“Mexico is also a surprising potential beneficiary, despite all the talk from the US,” adds Yerlan Syzdykov, global head of emerging markets at Amundi. “For instance, a toy manufacturer such as Mattel, which relocated some production from Mexico to China, may well find it advantageous to relocate back in this environment. Countries such as Honduras and El Salvador, despite their many governance problems, may also benefit for much the same reason.”

The problem, however, is that Brazil is not China in terms of capacity, as Malloy explains: “These countries are very small compared to China, so making an overnight shift into them isn’t feasible. Large companies are looking at options and starting to plan.”

Even India, comparable in size and population, is no substitute. As Malloy argues, it “doesn’t have the same level of support for businesses – ports, workforce and the like – that China does. It can’t just absorb re-routed value chains. Real companies move slower than markets, and this will be a gradual transition.”

The losers
There have been some losers in this game, other than the obvious ones – the two protagonists.

“In some instances, EM suppliers of components to Chinese companies have been hit when demand for those companies’ products drops off in the West. The effect on Huawei’s supply chain has been noticeable – for example, on some of its Taiwan-based suppliers,” says Syzdykov.

He also points out that, at a country level, those reliant on Chinese suppliers may be disadvantaged as “Huawei’s EM national-level and corporate customers face hard choices when it comes to upgrading their technology infrastructure”.

And, although China no longer vacuums up commodities in the same way as once it did, it is still a major importer. “As the Chinese economy slows down, there will be a knock-on effect in those countries supplying China,” says Syzdykov: “Chile and Peru, who are China’s main copper suppliers, watch it like hawks, and they will be worried about the effects of the tariffs on its economy. Australia, as a big commodities exporter, could also suffer. However, China may use this as an opportunity to redirect trade that is more closely politically aligned with it, in its ongoing development of the New Silk Road.”

That has important implications for the regional configuration of trade. Rather than clipping China’s wings in this respect, the US might have forced it to expand its influence faster.

Currency effects
The development of the New Silk Road goes hand in glove with the uptake of the renminbi. Bank of International Settlements speculated in a December 2018 working paper on currencies: “What if the renminbi becomes a key currency alongside the dollar and the euro? Already some EM currencies are co-moving with the renminbi against the dollar. On current evidence, a renminbi zone would shrink the dollar zone and widen its current account deficit.”

Sehgal reckons that the trade war has little effect on this, as “most companies in the global value chain still price in dollars, so there’s been little currency impact as a result of changing trading patterns between the dollar and renminbi.”

However, Malloy sees the potential impact of the trade war as being more profound, consolidating China’s regional hegemony: “Countries in the region are pivoting to China to build partnerships, and I suspect that we will see the acceleration of the renminbi’s internationalisation because of the trade war. China will do more direct deals with Russia to buy oil and gas, and Shanghai Direct will see foreign investors participate more in the local bond market, which currently has about 1% foreign ownership.”

So while trade effects are broadly positive for EMs, but signifying little qualitative change, it could accelerate some already extant trends reshaping EMs: “At a time when the US is increasingly isolationist, China is doing the opposite,” says Malloy. “The trade war will accelerate China’s Belt and Road programme, having positive effects on countries such as Thailand, where it will develop connections between the north and south.”