2
Liquidity: Cloud with a silver lining

Liquidity: Cloud with a silver lining

Liquidity risk is inherent in fixed income yet it is hard to manage. While it may appear less prevalent, or even disappear from investors’ consciousness for long periods, it has recently reasserted itself.

“It is not steady and changes by sector and by name. As a result, it represents both a market risk and an idiosyncratic risk,” says Fabrice Jaudi, fixed income CIO at S&P Investment Advisory Services. Opinions on secondary market liquidity can vary dramatically, and part of reason is that liquidity can mean several different things.

As Natalie Trevithick, head of investment grade credit at Payden & Rygel, points out, there are several components of liquidity that are of concern for the US Treasury. One is speed of execution, which is affected by market sentiment. Another is market depth and availability of bid or offer; most importantly, a tight bid/ask spread reflects the ability to undertake a transaction that will not materially affect the asset’s price. Finally, there is resiliency – the ease with which prices return to normal.

But there is no room for complacency: “All the evidence in my mind, and the anecdotal evidence we have as money managers is that liquidity is dire in credit markets” says Kevin Corrigan, head of fundamental fixed income at Lombard Odier Investment Managers. “You would be naïve to imagine that somehow the world is the same as it was pre-2008 and that the ways to access fixed income premia haven’t changed.”

Corrigan argues that there has been a fundamental structural change in the liquidity of the debt markets, which has ramifications for the way that firms such as his manage their portfolios. “It has led us to change our approach to diversification, moving away from high conviction portfolios with few stocks,” he says.

Liquidity is of great concern to central banks and regulators, who fear systematic problems with the plumbing of debt capital markets. “Pre-crisis, in the US, the primary dealers owned 2% of the outstanding corporate bond market. That has fallen by 80%, with dealers holding less than 0.5%” says Gaul. He believes that dealers have reduced holdings for a variety of reasons, not just the regulatory environment: “The 2008-09 crash in credit showed market makers that there was more risk in the marketplace than they had anticipated and the CDS market has dried up so they can’t hedge their positions in a crisis.” 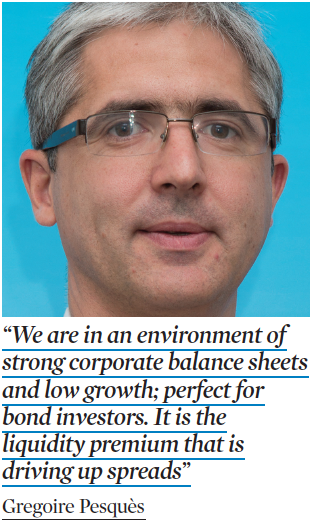 While the collapse of dealer inventories is a worry for some, Gaul is not concerned: “Dealers hold corporate bonds so that they can make a return. A part of the pre-crisis inventories they held could be accounted for by proprietary trading positions, which, if anything, probably exacerbated illiquidity issues”.

Gregoire Pesquès, head of corporate credit at Amundi Asset Management believes managing illiquidity is now a critical part of portfolio strategy: “So much so that managing the liquidity premium is as important to us as managing the credit risk. We see ourselves as much a liquidity manager as a credit manager.” Pre-crisis, Pesquès was used to seeing a 1bp bid/ask spread across a lot of the corporate bond market and was not concerned about liquidity. In contrast, today he sees illiquidity as a performance driver: “If spreads just reflected fundamentals, they would be two to three times lower. We are in an environment of strong corporate balance sheets and low growth; perfect for bond investors. It is the liquidity premium that is driving up spreads.”

Pesquès has some rules of thumb that give a good indication of future portfolio liquidity: “The age of an issue is very important. New issues are very liquid, but that gets lower with time. If the issue is over five years old, it is probably completely illiquid, so a breakdown of the portfolio by date of issuance gives an easy estimate of liquidity. We also look at the bid/ask spreads by sector in the market.” 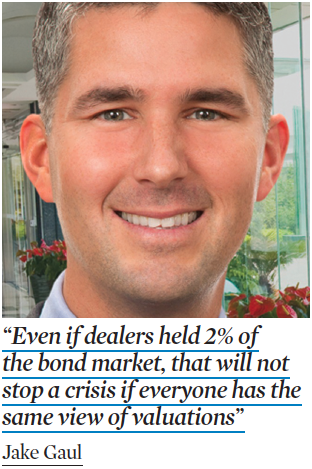 Differing views on liquidity may reflect the relatively higher liquidity seen in the US markets compared with elsewhere. The US has the best liquidity, particularly in the benchmark issues, followed by euro and sterling bond markets, where there are a few large issuers.

“In Europe, absolute bond yields are so low that the illiquidity means that it is often not worth investing in them at all,” says Pesquès, who points out that investment grade liquidity is also poor in the emerging markets. “In terms of the Sharpe ratio, the developed markets look better than emerging because whilst valuations are attractive for emerging, the volatility and lack of liquidity counts against them,” says Pesquès.

Ultimately, investors must remember that these are over-the-counter instruments. “They are not listed and with that comes certain constraints on how they trade,” Evan Moskovit, portfolio manager at NN Partners argues. “Whilst the number of market-makers may have been reduced, there are a number of electronic exchanges that have come into their own over the past few years, which have helped liquidity by matching buyers and sellers. But folks may have to realign their expectations and be more patient on how they do their trades.”

But liquidity provided solely through matching trades gives rise to problems. “Peer-to-peer trading has been a slow process,” says Trevithick. “The reason is that we would not want to reveal our positions, which we see as proprietary information. If we bid for a bond that hasn’t had a reported transaction for a month the prices will move against us”.

Everyone can agree that liquidity depends on a diversified investor base. “Even if dealers held 2% of the bond market, that will not stop a crisis if everyone has the same view of valuations,” as Gaul points out. But, as he also adds, when illiquidity becomes serious for investors it gives rise to opportunities for market makers to increase their commitment to the market.

The global financial crash started in the banking sector and affected it more than any other. Increases in capital requirements on both sides of the Atlantic and business model changes have seen banks reduce or withdraw from some previously lucrative areas.

As a result, credit risk has decreased since the crisis. “All the banks have been restructuring and cleaning up their balance sheets. The probability of defaults has declined significantly, especially in the developed markets of the US, UK, France and Spain,” says Fabrice Jaudi, fixed income CIO at S&P Investment Advisory Services. He argues, that moves such as the requirement to issue more junior debt – including contingent convertibles (CoCos) issued by high quality names as Credit Suisse, JP Morgan and Goldman Sachs – provides another layer of loss-absorbing capital and has provided new opportunities for debt investors.

The balance of risks and rewards has shifted in favour of bondholders at the expense of shareholders. “The regulators have derisked the banking business, forcing them to inject a tremendous amount of capital,” says Evan Moskovit, portfolio manager at NN Partners. “For bondholders, there is little releveraging risk. M&A activity is likely to be neutral to positive. So, from a safety viewpoint as a fixed income investor, you have to feel pretty good about the banking sector.”

Unsurprisingly, given this, financial sector credit investments have outperformed every other sector in the US for virtually every year since 2008, during both periods of spread tightening and expansion, notes Jake Gaul, senior portfolio manager at Standish Mellon Asset Management. Another reason for this, he believes, is that many banks have been growing their loan books slowly, so their debt issuance has been crowded out by other sectors: “Bank debt accounts for 28% of the US market today versus 38% pre-crisis.”

It can be difficult to make comparisons between US and European banks. “In Europe, there is much more reliance by industry on the banking sector so as a result, the health of the banking industry is of much more importance to governments,” says Gaul.

Structurally, there are also some significant differences, and the more subordinated paper issued, the greater the safety net for senior debt holders. “We are seeing very widespread divergence in terms of the senior to subordinated spread ratio in the US compared to Europe,” says Natalie Trevithick, head of investment grade credit at Payden & Rygel. “In the US, subordinated paper typically trades at 1.5 times the spread of senior paper. If you look at some of the European banks, subordinated debt spreads are often more than double those of the senior debt. There will be a slew of subordinated paper coming out of European banks for the next few years, which will provide added protection for senior bond holders.”

US banks are further along the path of shoring up their business than their European counterparts, some of which are continuing to see wide-ranging structural changes. “We have seen what Deutsche Bank have gone through and Credit Suisse are going through. As an investor, I am not sure what those institutions will look like in the future and I am not sure they know either,” says Moskovit. “We need to be comfortable with the institution, with their management and with their strategy. If there are too many unknowns and idiosyncratic happenings within an institution, investors may feel they are not being compensated adequately.”

Gaul prefers UK banks such as RBS and Lloyds compared to those in continental Europe: “We find it more difficult to get comfortable with the risks that French banks are taking, their transparency and how they make money and fund themselves on a day-to-day basis. It is not as transparent as we would like to see.” But he adds: “What the European banking system does benefit from, which the US does not and perhaps we do not appreciate enough, is the high level of implicit government support.”

At current spreads, Trevithick does not see value in European senior bank debt compared to elsewhere. “When we look at subordinated paper, whilst it appears cheap on a spread basis, there is a lot of supply coming out. There are also structural disadvantages behind some of the credits which could lead to spread widening.”

US banks have been restructured as a holding company with operating companies beneath. Debt is issued by operating companies, enabling bondholders to have a direct claim on the underlying assets. If debt is issued by the holding company, there is an issue on how investors would recover their money in the event of a default. European banks are still moving towards this structure, driven by a regulatory environment trying to give deposit holders seniority over bond holders in cases of default.

“We have been overweight banks, not just for future outperformance, but because they now represent a good defensive place to keep money,” says Gaul. This appears to be the consensus: “Over the past three years, I have been very excited about banking sector debt, both European as well as US,” says Gregoire Pesquès, head of corporate debt at Amundi Asset Management. Banking sector debt looks likely to remain the stable core of investment grade debt portfolios in the years ahead.