Europe faces the spectre of deflation, and the European Central Bank (ECB) seems set to be as active as possible in preventing it from taking hold, while its smaller companies remain deeply discounted relative to global peers – even after a recovery in valuation multiples. In contrast, the US and UK are further along the recovery path and their central banks are looking to tighten at a time when valuations for small and medium-sized companies (SMEs) in both countries look high. Emerging markets, in general, are perceived to be vulnerable to Federal Reserve tightening and dollar strength, but Asia-Pacific small and mid-sized stocks exhibit the most attractive valuations, on an absolute basis.

“Europe and Japan are seeing more attractive valuations but the UK small and mid-cap stocks are the most expensive on the planet,” observes Satya Pradhuman, CEO at small and mid-cap analyst firm Cirrus Research.

Given these starting points, what is the coming monetary-policy environment likely to bring for smaller companies, and how might governments offer help to these crucial contributors, at both national and global level, to the economy?

A crucial element for small company prospects is access to credit, and this is particularly important in continental Europe with its broken banking sector that still requires massive intervention, and its bond markets that remain out of reach for many small-caps.

“Criteria for new lending have been very high over the past few years so small and mid-caps have been at a disadvantage,” says Marcus Ratz, a partner and small-cap portfolio manager at Lupus Alpha.

In the UK, Simon Rogerson, CEO of smaller-companies specialist Octopus Investments, which published its High Growth Small Business Report in November 2014, points out that 40% of applications by SMEs for bank finance were rejected in the past year.

“In Q2 2014, net bank lending to SMEs in the UK fell by £300m [€382m] at a time when smaller companies are growing very quickly and are very excited about their future but in need of new capital to expand,” he says.

•  These policies are crucial to smaller companies, which are more exposed to credit availability.

•  The divergence of performance between Europe and the US owes much to the different pathways to bank recapitalisation in each region.

•  The growing structural bias of institutional investors away from domestic small-caps has also drained market of capital.

The problem in the UK, unlike in Germany with its network of Sparkassen (mutual savings banks) and Volksbanken (co-operative banks) located close to their Mittelstand clients, is that the UK banking sector’s corporate lending decisions tend to be made centrally, and the other funding mechanisms available for these companies are still at a relatively early stage of development.

“Crowd funding, for example, has received a lot of publicity but only raised £30m last year,” says Rogerson. He argues that while successive UK governments in recent years have done a good job of encouraging investment into smaller companies, more needs to be done. “There are a number of options – for example, allowing a reduction or a deferral of corporation tax or national insurance holidays. The government could also consider other mechanisms to encourage the flow of capital into smaller companies, such as granting pension funds additional tax credits for investing. Either you tweak the fiscal conditions for small companies by playing with tax rates and you encourage them to reinvest profits back into their growth, or you play with levers around deployment of capital.”

Pradhuman sees improving credit access as something that can be changed organically in the real economy, or else can occur at the policy level through central bank action.

“Any easier credit backdrop we are witnessing is mainly policy-driven, whether in the US, which is furthest along, or in the UK, Europe and Japan,” he says.

But whether the expansion of the ECB’s balance sheet can result in a boost to European economies is a matter of intense debate. 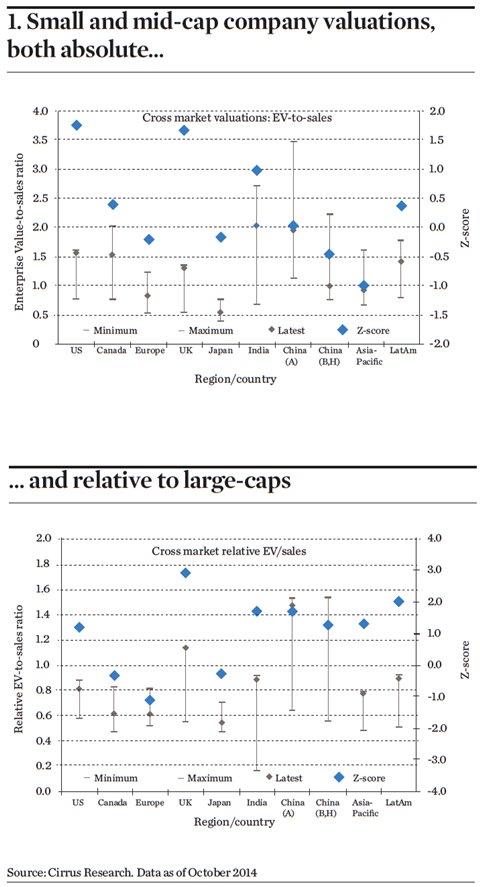 The US, Ratz argues, has been very successful in stimulating growth, in contrast to Europe, where the ECB has faced political obstacles to full QE and where the banking sector has been slower to repair itself.

“The big difference between the US and Europe is that in the US, the larger banks took over smaller banks and recapitalised to enable corporate lending to resume,” he observes. “In Europe, it was the other way round. Governments have given huge rescue packages to the banks. There were no capital increases but the ECB took over the bad debts. The money given to the banks is now gone and we haven’t seen any of it.”

Increasing demand in Europe, combined with easier access to credit would be the key drivers for European small and mid-caps.

“Look at Japan as an example,” suggests Pradhuman. “Japanese small and mid-cap stocks have done well, not because they are growing faster than they were five years ago but because there is a much easier credit policy in place and investors have been attracted to that market.”

If Japanese and European small-caps stand to benefit from looser credit conditions, does that mean tightening in the US threatens harm to its smaller-company valuations? Pradhuman suggests not.

“I would argue that you won’t see a size premium effect adversely affecting small-caps unless the Fed were to be overdramatic in tightening – and I just can’t see that happening,” he argues. “The Fed has the luxury of being able to tighten whilst the growth rates across the economy are still very soft, so they are allowed to make their changes in a gradual fashion.”

This should provide support for US small-caps, even though valuations look high.

It is not just access to credit that can hamper smaller companies’ share price performance. One side effect of the growing internationalisation of institutional investment has been a shift from investment in domestic smaller companies to overseas diversification.

“Nearly all UK-quoted companies have seen their institutional shareholder base decline, despite the rapid growth in the scale of capital managed by these institutions,” observes Gervais Williams, managing director at Miton Asset Management in his newly-published book, The Future is Small.

One way to try and reverse some of that trend is to create institutional investor-friendly listed share markets for small and micro-caps, which European authorities have done in the shape of Le Nouveau Marché in France, Germany’s SDAX and the UK’s AIM.

“One of the markets has been extremely successful since it was established in 1995 and the others haven’t,” observes Rogerson at Octopus. “That has been partly driven by what the UK government has done to attract capital into that market, and partly by how that market is now seen by institutional investors – which is an attractive place to put capital.”

Williams also suggests that the UK and Japan are the only countries that can genuinely boast highly developed universes of listed smaller companies.

But even AIM is not without its problems, of course.

“We had a very negative experience in the UK AIM market,” says Ratz at Lupus Alpha, which is based in Frankfurt. “There was little transparency and little liquidity after an IPO. As a continental European investor, we are probably last in line for getting information and, as a result, we do not get the appropriate information we need to make investments.”

It is less regulated than its larger-cap cousins. Moreover, despite having a total market cap of more than £70bn and arguably good opportunity for diversification, the strong perception is that it has been subject to passing fads – namely technology in the late 1990s and resources over more recent years.

“Let’s not shirk the issue – many investors have not made decent returns on AIM-listed stocks,” writes Williams, amid a generally very positive overview of the market’s virtues. His argument, though, is that this has been the result of waves of IPO activity in those fashionable sectors that have not performed as well as hoped. He insists that there are plenty of AIM-listed stocks that are well placed to deliver premium returns with less excitement and less investment risk.

That perceptions do not necessarily match reality is, in part, probably a function of the withdrawal of institutional investors from the sort of firms listed on exchanges like AIM. Exploiting the opportunities on offer requires the application of resources which, in turn, requires a long-term commitment to these markets. Investors might be well served in re-visiting that commitment, as monetary policy loosens in Japan and Europe and lending channels begin to thaw after the long, post-crisis freeze. The unlocked value could prove to be considerable.