Briefing: Sri Lanka after the bombings

The tragic Easter Sunday bombings in Sri Lanka devasted its tourist industry as other countries advised their citizens not to travel to the country. While travel restrictions have now, in the main, been lifted, the damage to the tourist industry has already been done.

Hotel occupancies plummeted to 20% or less over the summer and even those consisted mainly of locals over weekends, attracted by huge discounts to hotel rates. Desperate hotel staff, meanwhile, are urging what few foreign visitors they have to write good reviews on TripAdvisor, in the hope of inspiring others to join them. Since tourism accounts for a large portion of the Sri Lankan economy, the effects have been calamitous.

Tourism’s troubles come at a time when Sri Lanka faces challenges in other key industries, such as tea, where its steep hillsides make mechanised planting unrealistic. This is in contrast to its main competitor, Kenya, where planting is almost entirely mechanised. As a result, labour costs on Kenyan plantations are an order of magnitude lower.

To make matters worse, one of Sri Lanka’s traditional main export markets for tea has been Iran where, as one prominent local tea exporter complained, US sanctions have now become too difficult to bypass.

The bombings certainly took the country by surprise. For many outside the country, it was a surprise that Sri Lanka even had a Muslim population. For people in Sri Lanka it was a revelation that local Muslims would target Christian churches when there had been no history of tensions in the country between the two religions. Both of them have followers from many different ethnic communities within the country.

What is a relief for Sri Lanka is that the bombings are not the precursor to a civil war, any more than the bombings in Paris in 2015, or in Manchester in 2017 were in France and the UK respectively. As Brian Bandsma, emerging markets portfolio manager at Vontobel points out, terrorist attacks are a fact of life in many countries: “9/11 didn’t mean you couldn’t invest in the US, nor the attacks in Mumbai in 2008 at the Taj hotel, and Sri Lanka is no different. The longer-term story for Sri Lanka as a tourism destination will be impactedcted in the short term but if the government is effective at reducing further risks of terrorism it should eventually recover.”

But Sri Lanka offers investors the potential for far more than just tourism-related opportunities. There are some attributes that need to be present for any emerging market (EM) to rapidly move up the development curve. Property rights, for example, since without them any investment would be risky. Fortunately Sri Lanka has a well-developed legal system.

Emerging economies tend to get stuck into what economists call the middle-income trap, often because they do not develop their education systems. Often a lack of skills and poor training mean that people cannot transition into high-value-added industries. But in Sri Lanka’s case it has a high level of literacy and a well-developed tertiary education system relative to EMs with similar levels of GDP per head.

As a result of its high levels of education, many foreign as well as local fund managers are positive on the investment prospects. “We believe Sri Lanka could witness a multi-year construction boom,” says Oliver Bell, portfolio manager of the T Rowe Price Frontier Markets Equity fund. “In addition to the resumption of China-led developments, there are a number of other large-scale public and private projects in the pipeline. In addition, reforms have the ability to accelerate economic growth in Sri Lanka, a country already fortunate to boast a highly educated workforce. Importantly, the country is a haven for some of the most attractively valued businesses across frontier markets, which are led by effective management teams.” 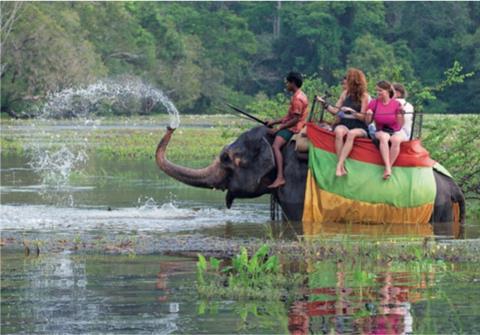 Tourism accounts for a large part of Sri Lanka’s economy

Moreover, as Bell points out, Sri Lanka’s shoreline, unlike that of India, is fortunate to be largely surrounded by deep water – the required ingredient to house large-scale port developments. Sri Lanka has three main ports – on its east, west and south coasts – which are perfectly situated along the main shipping route between Asia and Europe.

China is well aware of Sri Lanka’s strategic location and has invested heavily in the country over recent years. But that, according to many local commentators, has come at a price. They see China exchanging debt for equity in key infrastructure assets, calling into question whether the country can maintain control over its own facilities.

Sri Lanka’s high educational levels should also bolster the IT sector. This has been behind the successful development of IT programming consultancy and related activities, with a growth rate of 10.8% in 2018.

Evidence of the quality of the industry can be seen from the success of MillenniumIT founded in 1996 by Tony Weeresinghe, an entrepreneurial Sri Lankan software developer. It is now one of the world’s leading developers of high-performance trading systems and was acquired by London Stock Exchange Group (LSEG) in 2009. 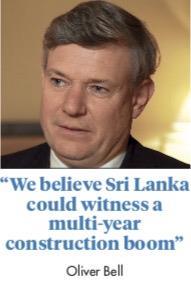 That might have been seen as a brave move by then LSEG chief executive Xavier Rolet, with MillenniumIT’s 450 staff and intellectual property based in a country where a 27-year civil war had ended just months before. But the business has grown rapidly and now supplies financial institutions around the world.

Perhaps the real question that should be asked of Sri Lanka is not what it requires to flourish as an investment location but why it has not already done so. The answer is simple. The country has been led for the past 70 years since independence by populist politicians from all sides, playing ethnic tensions to gain personal power at the expense of the common good. That process is still continuing. The Tamil Tiger insurrection may have been defeated but a legacy of bitterness lives on.

But the political disputes are not just associated with Tamil separatism. Most recently, points out Marshall Stocker, director of country research at Eaton Vance, Sri Lanka’s potential as an equity investment has largely been blind-sided by governance issues relating to the president’s surprising effort to coordinate the sacking of the prime minister in a failed no-confidence vote.

The upcoming elections may lead to improved governance but the omens do not look good. What has been most galling for Sri Lanka, is that it was the incompetence and negligence of the divided government that allowed the bombings to happen, despite repeated warnings.

The chaos does have political ramifications. Gotabaya Rajapaksa, the former defence minister under his brother President Mahinda Rajapaksa, was responsible for defeating the Tigers in a bloody climax leading to the deaths of thousands of civilians. He is accused of war crimes but now benefits from his strong man image to announce that he will be running for president and will stop the spread of Islamist extremism by rebuilding the intelligence services.

However, while he declared his candidacy soon after the Easter Sunday terrorist attacks he must be allowed to renounce his US citizenship to contest the presidential elections. The Sri Lankan constitution bars foreign citizens from becoming president. Such a renunciation seems uncertain with court cases outstanding against him in the US relating to the murder of a journalist.

Sri Lanka may have the potential to emulate Malaysia but its politicians need to be prepared to embrace a pluralist, multi-cultural, multi-ethnic democracy, rather than the ethnocentrism and majoritarianism that have prevailed since independence. As a result, says the academic, Sachithanandam Sathananthan, in a recent Sri Lankan newspaper article, the Sinhala-Buddhist elite has successfully generated three armed challenges to its state – from 1971 to 2019 – by the Sinhalese JVP, Tamil LTTE and now the incipient Muslim NTJ.

Sri Lanka’s tourist sector looks set to recover quickly from the bombings but the underlying political challenges for the country still remain. The investment climate, though, is attractive across many sectors with tourism in prime position. Prior to the bombings, the country had about 2.5m tourists a year compared with over 35m for Thailand. That alone is an enticing prospect for foreign investors but they may have no choice but to build in a large political risk premium into any return expectations on their investments.