Commodity Prices: If only we could blame China

There is a widespread view that the steep fall in commodity prices is all about the economic slowdown in China. Such an outlook is simplistic. While it is true that China’s GDP growth rate has slowed substantially in more recent times, perhaps we should consider whether China is as much the consequence as the cause. Should the finger be pointed at the commodity producers instead?

In addition, a more likely underlying root cause rests in the combination of high, and rising, debt levels among corporates in emerging markets, and a strong dollar – particularly when measured on a trade-weighted basis.

Commodity prices peaked in 2008, only to fall dramatically as the global financial crisis (GFC) took its toll. Between 2009 and 2011, a substantial part of those losses were recovered, but since early 2011 it has been pretty much one-way traffic. It should be noted, though, that in the early stages of the post-2011 fall in commodity prices, oil did not participate, as oil prices were pretty much flat between April 2011 and June 2014.

Phrased slightly differently, commodity prices have fallen well over 50% since April 2011 but oil prices have only participated in that rout since June 2014. Energy (broadly defined) accounts for only about 31% of the Bloomberg Commodity index so there is definitely a bigger story unfolding here.

Commodity prices have suffered in all segments of the market. Anything from sugar to iron ore is down significantly, and it is really hard to blame the fall in sugar prices on China. The Asian giant is largely self-sufficient in sugar and is not a large player in international sugar markets, so what is going on?

These are the real drivers:

• Commodities are the single biggest export article of most emerging market economies;
• Many corporates have borrowed a lot in dollars in recent years;
• The dollar on a trade-weighted basis has been very strong more recently.

Servicing the rapidly growing mountain of debt has proved a great deal more expensive than expected, and corporates have been forced to sell their commodities at increasingly deflated prices (and continue to do so). What many assumed were exceedingly good borrowing terms have proved to be anything but, once currencies are taken into account.

Obviously, if the commodity in question is priced in dollars the corporate involved will also generate income in the US currency. But that income has fallen steadily as prices have declined, so it is only a partial hedge.

All this is not to say that China is free of some responsibility regarding the current slowdown in global economic activity. However, China’s problems have little to do with falling commodity prices. It is facing a decapitated banking industry, which has been far too willing to lend to all kinds of investment projects – good and bad.

At the same time – at least until recently – investments and exports have driven the growth model. In contrast, the growth in consumer spending has been relatively modest. In 2005, exports and investments constituted 34% and 42% respectively of Chinese GDP. By 2014, investments had grown to 46% of GDP, while exports had fallen to 23%. Rapid credit expansion in China’s banking industry – from $3trn in 2006 to $34trn in 2015 – has fuelled the growth in investment. That is a shocking amount of credit in a $10trn economy.

Now the Chinese leadership faces a big challenge. It must restructure the banking industry while, at the same time, seeking to change the growth model. There are several things that could go wrong in the process. Having said that, China is a heavy user of commodities, not a large producer, and it stands to benefit from lower commodity prices.

The slowdown in Chinese economic growth is, to a large degree, the result of problems in the banking industry. Non-performing loans are rising at no more than 1-2% a year, according to official statistics. But the true growth rate in non-performing loans is probably more like 5-10%.

The economic slowdown in China has certainly had some impact on oil prices. But one should not overstate China’s role in setting the price of oil. After all, China only accounts for 16% of global GDP and it has been through substantial economic slowdowns before without them having had the same dramatic impact. The fall in oil prices appear to be primarily a supply problem not one of demand. 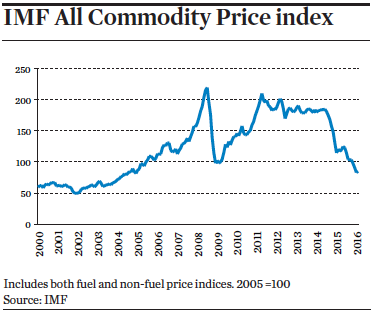 Oil is widely known to be an inelastic commodity, which explains why oil prices have fallen as much as they have. A relatively modest slowdown in economic activity – not only in China but across the world – combined with higher-than-expected supplies, has created an imbalance between demand and supply, and the price has behaved exactly as the textbook prescribes.

After the significant damage that the GFC did to the financial system across developed economies, both banks and their regulators are on their toes to avoid another calamity. They are now tightening credit conditions in emerging markets. Total credit to emerging market corporates fell in the third quarter – for the first time since 2009.

This has created a rather bizarre situation. Where common sense would suggest that the supply side should cut back when prices fall. Yet, the exact opposite has happened. Suppliers of various commodities (not only oil) have increased their supply as prices have fallen – presumably to service their rising debts.

However, this is not the first time that a crisis has hit the emerging markets. In 1997-98 the Asian financial crisis did substantial damage to equity prices as well as commodity prices. The ultimate saviour back then turned out to be the combination of low commodity prices – in particular low oil prices – and competitive foreign exchange rates.

There is no reason why the present combination of low oil prices and attractive foreign exchange rates should not invigorate economic growth across emerging markets just as it did it back then. After all, the fall in oil prices this time has been even bigger than it was in 1997-98

This is not a repeat of 2008 though. An emerging market crisis will do limited damage to the financial system of the developed economies because their banking systems only have limited exposure to corporates in emerging countries. A recession is possible but it will not be 2008 again.

Finally, a word on whether emerging markets are, as some are saying, the trade of the next decade. Emerging markets could ultimately do well but much will depend on the entry point. A lot of leverage has been established across emerging markets, much of it in dollars, and the strength of the US currency against local ones is killing many companies. It therefore makes sense to take a selective approach. Having said that, there are definitely openings for opportunity seekers.