Equity buy-write strategies: A bridge into the equity world for the yield-starved

While frontier markets are now the same size as emerging markets in 1995, in other respects they look like emerging markets circa 2005. Asha Mehta warns investors not to miss out on further turbo-charged convergence

Frontier markets today are often compared with emerging markets from decades ago. On some levels, this comparison is reasonable. Frontier countries tick the boxes of early-stage development, economic vitality and low index representation that emerging countries demonstrated in their early years. By capitalisation, the frontier asset class is about the same size today – about $4bn, or 1% of global market cap – as the emerging markets of 1995.

Emerging markets are now a mainstream asset class, representing approximately 15% of global capitalisation. Many argue that there is a similar opportunity for significant expansion in frontier markets. However, to assume that these markets are unsophisticated, or that the road for frontier will be similar to that of emerging markets in the past, is to ignore some important differences. What might surprise investors, in particular, is the pace of this potential development. Data suggests that frontier economies may not need 20 years to achieve maturity.

Leapfrogging development
Frontier economies are growing rapidly. In 2011, frontier markets posted an average GDP growth rate of 4.9%, three times faster than the 1.6% growth rate recorded by the 10 largest advanced economies, according to the World Bank. Nineteen of the top 25 fastest growing countries in the world are in the frontier region. Many are experiencing a period of ‘catch up’ growth, or economic convergence, as they rapidly integrate into the global marketplace.

There are many drivers of this growth, and are arguably more stable than the forces that propelled emerging markets in the 1990s. To some extent, development agencies and local governments have learned lessons from the troubles of the past and have promoted more sustainable economic policies in response. For example, the painful experiences of Latin America and Asia in the 1990s have taught policymakers the importance of floating exchange rates, and fiscal and debt policies are more robust. Governance is markedly more advanced, with 29 of 36 frontier markets having adopted IFRS accounting standards. 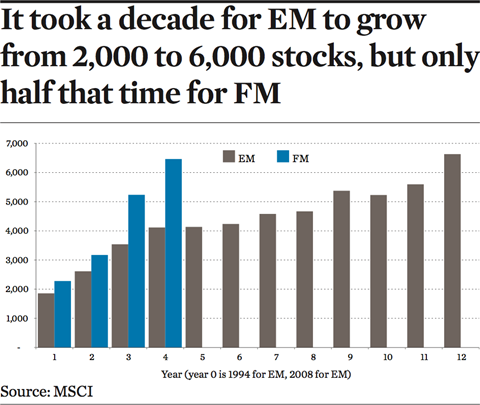 Frontier markets are also helped by dramatic changes in the global trade environment since the World Trade Organization (WTO) was formed in the mid-1990s. Trade agreements across countries are far more frequent and far more secure that they were just two decades ago, rendering it easier to access resources and labour, and to target consumers across the globe. In addition, there has been an explosion in the global IT sector. 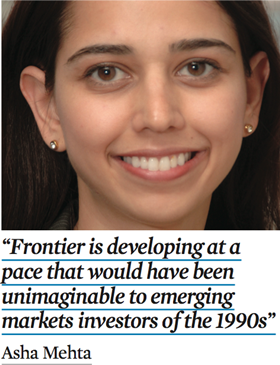 Communication across borders is dramatically easier today than it was decades ago. Moreover, many frontier economies, unburdened by outdated existing infrastructures, have leapfrogged to the fore in their use of technology to manage their capital markets.

Leapfrogging markets
The impact of these rapid developments on frontier equity is clear. Aggregate volumes in frontier equity markets today align with those in emerging markets not 20 years ago, but 10 years ago. Flows have been robust over the past several years, particularly from foreign institutional investors that invest with a long-term orientation. These factors are driving deepening liquidity within the asset class.

Frontier markets, as a group, continue to reach multi-year highs in aggregate trading volumes. With increasing trading volumes, transaction costs have fallen; bid-offer spreads are narrowing – approximately 10% below their three-year historical average. While low liquidity undoubtedly remains a challenge in frontier investing, volumes are far better than those seen in emerging markets when that asset class was in its nascency.

Another area of advancement is data availability. Today, there are over 6,000 stocks pricing in frontier markets with international coverage. Twenty years ago, when it was a similarly sized asset class, emerging markets only had 2,000 stocks. It took 10 years for emerging market coverage to improve from 2,000 stocks to 6,000, a feat that frontier has achieved in less than half that time.

We see similar leapfrogging when we look at other market attributes, including net margins, long-term debt to capital, and return on equity.

The upshot is that frontier’s current small capitalisation size suggests there is an opportunity for significant market expansion. However, the hurdles to investing in this asset class are lessening far more quickly than they did in the early days of emerging markets. This suggests that there are not only attractive stock opportunities today, but that the longer-term expansion of the asset class may come – and the window of opportunity close – sooner than many investors expect.

Equity buy-write strategies: A bridge into the equity world for the yield-starved