Investors back Shell in climate change vote but register concerns

Investors delivered “a clear and strong display of confidence” in Royal Dutch Shell’s approach to decarbonisation in voting down a shareholder resolution about emission reduction targets, according to the company.

Europe’s largest pension fund was among investors abstaining from voting. Including abstentions, Follow This estimated that dissent with the management position on its resolution was around 12%.

However, Shell argued that the vote “demonstrates not only support for our industry-leading strategy, but also clear trust in the ability of Shell’s management to implement it”.

“We recognise there are many voices in the energy transition debate and we will continue to engage constructively as we implement our approach,” it added in a statement.

Investors who voted against the resolution include BlackRock and Norway’s sovereign wealth fund, while those supporting it included Aegon, UK Church Commissioners, the Environment Agency Pension Fund, NEST and Dutch metalworkers’ scheme PME.

It did so because of “corporate governance concerns” and despite supporting the objective of Follow This’ motion.

In November last year, Shell announced a “net carbon footprint ambition” to cut net emissions from its energy products by around half by 2050. It would do this “in step with society’s drive to align with the Paris goals”, it said.

It recommended that shareholders vote against the Follow This resolution because the approach the company had decided on was wider-ranging and more progressive. “Follow us”, the company CEO said at the AGM yesterday. 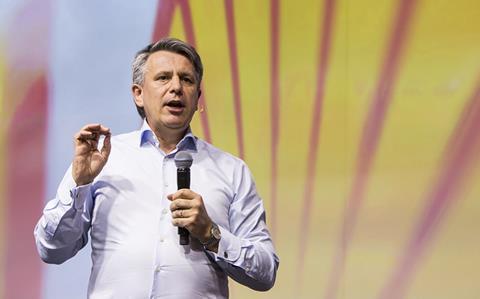 Addressing the shareholders’ meeting on behalf of Hermes Investment Management and Hermes EOS, a spokesman said “the use of the term ambition, rather than target, has raised doubts about the company’s commitment to this goal”.

“And it is important to note that the vote on the resolution does not represent the full level of concern on this issue,” he added.

To allay concerns, he continued, the company should commit to publish short- and medium-term targets for its decarbonisation strategy as soon as possible.

Shell should also publicly confirm that its 2050 ambition – to cut the net carbon footprint of its energy products by around half – “is synonymous with a long-term science-based target and to clarify this by turning the ambition into targets”, the Hermes spokesman said.

A representative of members of the Institutional Investors Group on Climate Change (IIGCC) also read out a statement.

Andy from @HermesEOS keeps up the pressure on @Shell to get really serious about it’s “ambitions” and aligns with @sciencetargets #ShellAGM pic.twitter.com/tPBJ4x3zi2

A spokesperson for the group registered the investors’ support for Shell’s “genuinely innovative and sector leading” decarbonisation initiative, but also their concerns around the company’s use of the term “ambition”.

“Although the reasons for choosing the looser framing of an ‘ambition’ out to 2030 are noted, the investors supporting this statement are clear that firm targets to which the company is accountable in the public sphere are necessary and desired,” the spokesperson said.

A few days before the Shell AGM a 60-plus group of investors with more than $10trn (€8.5trn) in assets used an open letter to the FT to call on the oil and gas industry to take more leadership on action on climate change. The intention, IPE understands, was to convey a uniform, consistent message to the sector.

Stronger opposition was registered in a vote on executive pay at Shell’s AGM, with 25% of votes cast against the remuneration report. The company said it would continue to engage with its shareholders “and would particularly welcome the opportunity to work with proxy advisors more closely in the future, to better serve shareholder needs”.