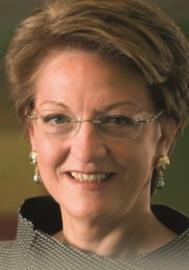 Chris Verhaegen’s influence on the European pension funds industry is immediately apparent in the pages of IPE. In one instance she is commenting on trans-Atlantic co-operation between pension fund associations; in another she is offering her views on the new European Insurance and Occupational Pensions Authority (EIOPA).

But the point is simple: Verhaegen has become not only a source of knowledge for all concerned with occupational pensions at a European level, she has made the European Federation of Retirement Provision (EFRP) the leading industry voice for Europe. The depth and breadth of her knowledge of the industry, and of her contribution to the cause of European pensions through the EFRP, make her a worthy recipient of IPE’s Outstanding Industry Contribution Award.

Over the years as secretary general, Verhaegen has tirelessly led the EFRP in defending pension schemes across the whole of Europe. Her range of achievements includes successful lobbying for a separate pensions directive, resulting in the IORP Directive, which covers the activities and supervision of institutions for occupational retirement provision, and against a potentially disastrous pensions portability directive, as well as around solvency principles, proposals on European financial supervision, accounting and corporate governance.

Other recent successes include getting separate stakeholder groups for occupational pensions into the new EIOPA, the Green Paper Towards Adequate, Sustainable And Safe European Pension Systems. This year also saw the establishment of an innovative website, EUpensiondebate.eu, whose aim is to provide information on the Green Paper, to stimulate a debate on pensions and to explain what the EU is doing to good pension systems.

“Verhaegen has become not only a source of knowledge for all concerned with occupational pensions at a European level, she has made the European Federation of Retirement Provision (EFRP) the leading industry voice for Europe. The depth and breadth of her knowledge of the industry, and of her contribution to the cause of European pensions through the EFRP, make her a worthy recipient of IPE’s Outstanding Industry Contribution Award”

Steady course
Representing 26 member organisations in some 19 countries and territories is not always easy. But Verhaegen has kept the EFRP under a steady sail and has not been blown off course. Writing with Angel Martinez-Aldama, then chairman of the EFRP, in the introduction to the EFRP’s 2009 annual report, Verhaegen spelled out some of the recent challenges: “Reflecting on how 2009 could enter the European history books, a large majority of all those involved in the financial services sector definitely would argue that the political decision to overhaul the supervisory structure for all financial institutions will be the event to remember.

“Indeed, keeping pace with supervisory reform process has absorbed a huge amount of our resources. EFRP had to participate to the debate of reforming the Committee of European Insurance and Occupational Pension Supervisors (CEIOPS) into a European Authority for Insurance and Occupational Pensions (EIOPA) to ensure that the powers of the new authority would be appropriate for the tasks delegated to them. Also, our efforts are focused on bringing the difference between work- place pensions and insurance activities to the statute book.”

Convincing UK pension funds to take more of an active role in the consultation on the EU Green Paper on pensions has also played a large part in her activity this year. Speaking at the 2010 National Association of Pension Funds annual conference, Verhaegen said UK schemes should push for more action on solvency provisions for pension funds within Europe.

Raising awareness
The whole European experiment is changing, Verhaegen wrote in IPE in October: “Brussels is moving step-by-step from an administrative centre of the EU towards a political hub and a powerhouse, including for pensions.” To miss out on the opportunities this throws up, is to be left behind. At the heart of the lobbying process, Verhaegen argued for greater awareness of the European Commission’s plans for a “European semester”, which “aims to achieve ex-ante co-ordination of economic policies in the EU and would allow the EU to clear national economic policy plans before they are tabled for decision in the member states. This means that the member states would have to submit their economic policy plans and budgets to the EU prior to adoption in national parliaments.”

It is important to co-ordinate a response, she wrote: “The pension sector will be busy formulating an answer to fundamental questions on how far Europe can and should go in the area of pensions. To facilitate this debate, the EFRP together with its national member associations has set itself the ambition to be a leading voice as ever by promoting an open debate on pensions in Europe.”

This is central to Verhaegen’s vision: ensuring that the EFRP is the leading voice on pensions within Europe.

One of the areas in which that voice is being heard loudly is the implementation of the IORP Directive. “It is difficult to welcome something when you don’t really know how the details will work out. We want to see not just what powers EIOPA will have, but how they will use them,” she told IPE recently. “Among our members there is fear on questions of harmonisation of rules across the EU. When dealing with the IORP Directive, EFRP members are very much concerned that the diversity of pension norms extant in the different counties may not properly be taken into account.”

Ultimately, as secretary general of the EFRP, it is the passion with which Verhaegen represents her members that makes her a commendable winner of the Outstanding Industry Contribution Award.

Writing in the EFRP’s annual report, she recognised that 2010 would be a difficult year, with many EU members struggling with budgetary constraints and the impact of increased longevity on their state- provided pensions. But she and Martinez-Aldama wrote: “EFRP welcomes this debate and stands ready to bring in the views of pension providers that withstood the financial storm fairly well.”

It sums up neatly the work of the EFRP and stands as a personal credo for Verhaegen: ready to represent the views of the association’s members, whatever the circumstances.