Senior managers at companies are in the best position to correct gender imbalances that exist in the staffing of businesses internationally, according to a poll of pensions industry attendees at the IPE Conference in Prague.

Avivah Wittenberg-Cox, chief executive of international consultancy 20-first, told the conference: “If you want a gender balance, it becomes a leadership and management skill to be built up much more than a diversity problem to be fixed.”

Asked what they believed was the “key lever for making real change”, 61% of delegates gave the answer “leadership teams”.

Some 24% of respondents said individual managers across the company constituted the primary tool for change, while 12% said women managing their own careers held responsibility. A further 4% answered that women’s networks were the most important element.

Wittenberg-Cox described the rise of women within economies and companies as having a “world-changing impact”.

There was now a large amount of academic research that correlated bottom-line performance at companies to the gender balance within executive teams, she said. 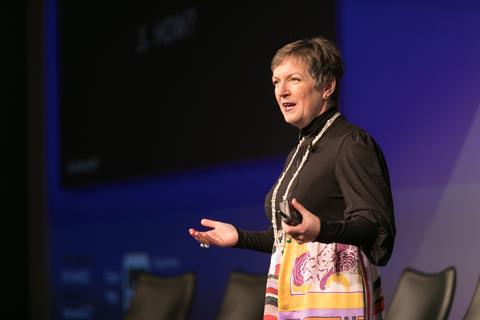 “Whatever you think of this kind of research – and I know it’s hotly debated especially in financial circles – there’s been a whole slew of it,” she added.

The data was starting to have an impact on a number of companies, nudging them into trying to address the topic more substantially, Wittenberg-Cox said.

“Right now the question for a lot of companies is are they good at attracting, retaining and promoting what is now the majority of educated talent on the planet,” she said, noting that 60% of university graduates were now female.

Wittenberg-Cox said that in most of the companies her firm was consulting – particularly large, multi-national organisations – the intake levels of staff were well balanced.

“The percentage of women in finance companies followed this trend exactly,” she said. However, Wittenberg-Cox added that the pattern differed between public sector and private sector companies within finance.