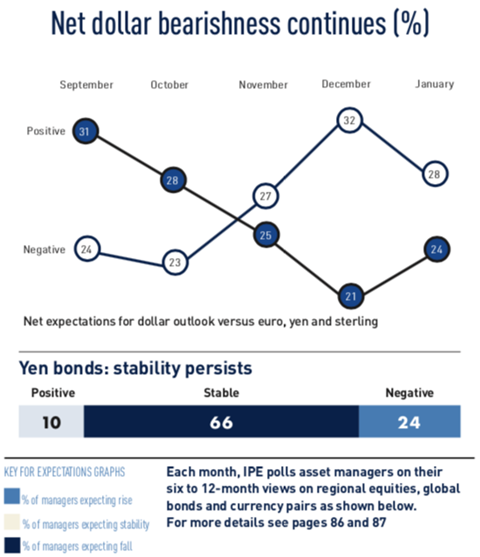 Last month, bond price sentiment either crept back to multi-year highs in the case of dollar bonds, or moved steadily upwards from a multi-year low, albeit nowhere near its periodic high in the case of euro-denominated bonds. This upward movement in sentiment stalled in the current survey period as positive expectations decreased for all bond denominations, except for yen bonds where it increased by just 1 percentage point.

Equity sentiment has seen anything but slow shifts in recent months. In the US there has been a prolonged pause in positive sentiment, which effectively preceded some very difficult months of either losses or large directional swings in the most recent month. In the euro-zone, these swings had been of rapidly declining expectations. As with bond price sentiment, manager sentiment has reversed. The short, sharp negative trend towards the US reversed; the euro-zone slide reversed (slightly); and with UK sentiment, while not turning positive, managers are apparently waiting to see how recent Brexit developments pan out. For equity sentiment, this has been a period of apparent relief.

We noted in the prior period that a meaningful event had occurred. This was not a trend shift but a moment where the persistent trend of cumulative expectations for dollar weakness and dollar strength crossed paths with net expectations for dollar strength now negative. Unlike the shifts in bonds and equities, this trend has continued to deepen in the current period as fewer expected the dollar to rise and more expected it to fall.