Is there any merit in functional finance versus classical economic theory?

Modern monetary theory (MMT) has hit the headlines with strong support from certain prominent US politicians on the progressive wing of the Democrats, most notably Vermont Senator Bernie Sanders and New York Representative Alexandria Ocasio-Cortez. But it has also attracted the ire of economists across the political spectrum – from Nobel Prize winner Paul Krugman and former Treasury secretary Larry Summers, to the Economic Experts Panel assembled by Chicago Booth Business School. Is it all garbage, as Larry Fink, CEO of BlackRock declared of MMT, or does it represent a school of thought that has merit enough to be taken seriously?

At face value, MMT appears to offer a panacea to hard-pressed governments by stating that deficits do not matter when it comes to achieving objectives such as high employment. So governments need not bother to balance budgets, which flies in the face of mainstream orthodox economic thinking.

But economics is not an experimental science whose axioms can be tested and refined in the real world, despite the apparent ‘physics envy’ that has gripped the profession. It may be career suicide for most professional economists to be seen to be supporting MMT, but there are a few, such as Stephanie Kilton, a senior economic adviser to Bernie Sanders’s 2016 presidential campaign, who are strong advocates of MMT. What is their rationale?

MMT, as Christopher Smart, head of macroeconomic and geopolitical research at Barings, points out, is neither modern nor does it primarily relate to monetary policy. According to Shamik Dhar, chief economist at BNY Mellon Investment Management, it is also barely a theory at all. Although it may still be ‘work in progress’ to a great extent, the underlying philosophy it represents is completely at odds with the classical principles of sound finance. That, however, is not necessarily a bad thing.

According to James Montier, a member of the asset allocation team at GMO and a rare proponent of MMT in mainstream finance, the role of government when dealing with budget deficits should be one of “functional finance” – in other words, not based on academic dogma but on implementing policies that help to achieve the overarching goals of macroeconomic policy in terms of full employment and price stability. That idea was first proposed in 1947 by economist Abba Lerner and some of the ideas behind MMT stretch back almost a century. 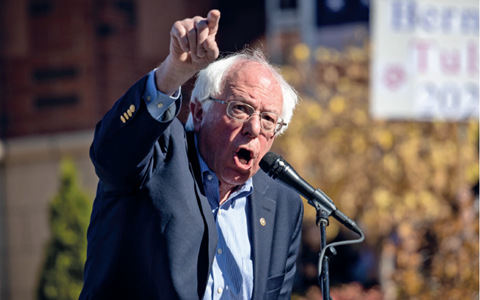 What do the supporters of MMT say?
Montier and other advocates of MMT argue that the orthodox economic attachment to sound finance is based on several axioms with no foundation at all. These include the idea that governments are like households; that printing money to finance budget deficits is always inflationary; that budget deficits and high debt lead to high interest rates; that budget deficits are not sustainable; and that debt is a burden to future generations.

By contrast, MMT is based around the philosophy of functional finance that Montier outlines. The question is how a country’s resources – people, natural resources, factories – can be utilised to fulfil macroeconomic objectives, the goal of MMT. What matters, then, for a country, says Barings’ Smart, is not monetary policy, but demographics, technology and globalisation.

“Fiscal policy should be aimed at generating full employment while maintaining low inflation rather than, say, achieving a balanced budget position” - James Montier

GMO’s Montier sums up the arguments for MMT simply. Money is created by the state. Any country that issues debt solely in its own floating currency cannot be forced to default on its debt. This includes the US, Japan, and the UK, but not the euro-zone or most emerging markets. Issuing debt creates deposits; knowing that government deficit spending creates reserves and drives down interest rates is vital to understanding Japan’s bond market, for example.

According to a key axiom of MMT, functional finance means fiscal policy is much more potent than monetary policy. “Fiscal policy should be aimed at generating full employment while maintaining low inflation rather than, say, achieving a balanced budget position,” says Montier. This opens up policy options such as job guarantee schemes, which ties in with newer ideas like a universal basic income to tackle inequality – seen as a major problem in the US. “The government creating jobs that pay more than McDonalds means McDonalds would be forced to raise its wages,” he says.

So the limits in MMT are real resource and ecological boundaries, not the creation of balanced budgets; inflation arises only if any sector is pushed beyond capacity limits. While a government can create inflation if it spends too much or taxes too little, the government sector is not unique in this regard. But private debt does matter, according to Montier, as the private sector cannot print money to repay debts, which has the potential to create systematic vulnerability. Understanding accounting is important; the government’s debt is the private sector’s asset.

In an MMT world, says Jeffrey Cleveland, Los Angeles-based chief economist at Payden & Rygel, the government would spend until it saw signs of inflation and then increase taxes to take money out of the system. Fiscal policy would ensure full employment because, according to MMT proponents, high unemployment suggests deficits are too small. Once there is full employment, the economy would have reached its potential, and the deficit could be inflationary. Post quantitative easing (QE), the US could be held up as an example of MMT working in practice, since the debt-to-GDP ratio has almost doubled without any significant increase in inflation.

How and why to implement MMT?
MMT philosophy also seems to suggest that QE could be extended beyond financial assets, akin to the ideas of deficit spending to avoid recessions advocated by John Maynard Keynes. But as

Isobel Lee, head of global fixed income at Insight Investment, points out, central banks were not independent in Keynes’s era, and his policies have never been popular in the US. 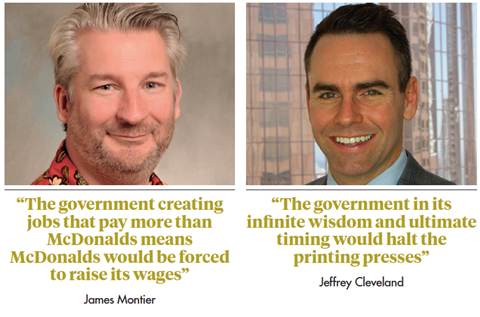 But if MMT does have merits in theory, should it only be applied, as Lee, suggests, to increase inflation when inflation expectations are focused on the downside? BNY Mellon IM’s Dhar points out that when interest rates hit close to zero, it does not make much difference whether the central bank prints money or issues bonds, so MMT policies would be pretty indistinguishable from Keynesian ones. The distinction between the two is that deficit spending should only be undertaken to avert deep recessions, according to Keynesians, and not all the time as MMT advocates would argue. 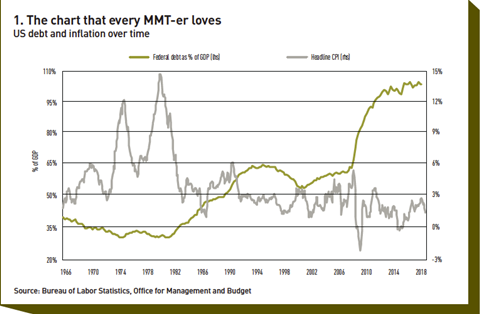 The main problem for MMT – if one disregards the objections of mainstream economists – is that practical implementation is difficult. An important stumbling block is an institutional framework focused on independent central banks with – in the case of many, although not the US Fed – a single policy objective to meet an inflation target through monetary policy. Smart of Barings makes the point that it is hard to imagine a world politically where the US would create a legislative framework for a new monetary and fiscal policy based on MMT that would restrict the role of the Fed dramatically and increase the power of Congress in the way it taxes and spends money.

Moreover, says Cleveland at Payden & Rygel, MMT relies on the premise that when the economy reaches its full potential “the government in its infinite wisdom and ultimate timing would halt the printing presses”. The experience of Germany’s Weimar Republic in the early 1920s and more recently of Zimbabwe or Venezuela suggests that politicians’ temptation to overspend is difficult to control. Notwithstanding the seductive appeal to many politicians, mainstream economists of whatever persuasion may still find that the underlying philosophy behind MMT has as much validity as any other set of economic ideas.