Asset Selection
Markets are still driven by political risk and growth prospects. It looks like the two risks are working in the same direction this month. Equity sentiment reduced everywhere, but notably in Japan, where Trump’s trade war with China causes angst. Bond sentiment moved up, but remained within negative territory. Figures for neutral on equity and bonds converged, reflecting increased political uncertainty. Neither equities nor bonds are seen as safe, so what can an investor do?

Country Allocation
EU equity sentiment is at the bottom of a hole it has been in since the start of the year. While this is driven by growth prospects and the expectation of a short low-growth period, Trump’s threats against French wine will not have helped. If so, there is cause for optimism: wine is a minor trade product, so a worse growth development may be cushioned by a reduction in political risk.

US neutral sentiment for bonds and equity have converged, but at a high level, indicating uncertainty. Yet, markets hardly reacted when Trump made an about-face on climate change. This is a reflection of low credibility, coupled with a high capacity for causing economic disruption. Bond sentiment is at its highest in 12 months. At this pace, it will be positive next month.

UK equity sentiment is now virtually at zero, while bond sentiment remains stable and negative. Investment is exiting. Neutral sentiment is virtually equal for bonds and equity. Negative growth prospects coupled with the fear that a ‘no-deal Brexit’ is again likely, although widely seen as unattractive or worse.

Japan’s loss of faith in equity is continuing, to the point where the distance between equity sentiment and bond sentiment is smaller than anywhere else and the lowest in 12 months. It is brought in perspective only by the high vote for neutral: even those who have a view are equally divided between a positive and a negative view. 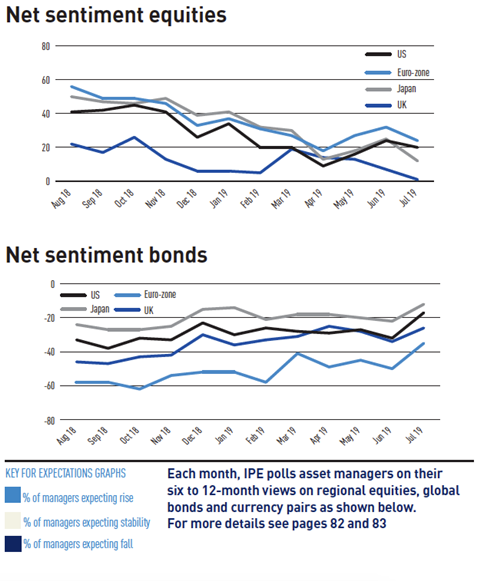