Asset selection
Last months’ move away from political risk continued this month for the US, the EU and Japan. The UK figures were stable or moving slightly in the opposite direction, reflecting worries over Brexit with the UK body politic in disarray.

As for growth prospects, analysts seem to agree the expected turndown will not last long. In particular, bond scores going down while already negative are an indication of growth optimism. In the UK, net equities sentiment is nearing zero again, reflecting doubts on future growth, linked to the increasing possibility of a no-deal Brexit.

Except for the UK, equity is looking better once more, while bond sentiment remains negative everywhere and is trending down.

Country allocation
The US trade war with China is a threat to US growth. Increasing uncertainty may turn growth expectations negative again, without a good alternative investment category. Yet prolonging the inevitable economic downturn would damage the electoral position of President Trump, so he may be talked out of his present attitude towards China.

The EU would suffer from a worsening of US growth prospects, but its capacity for growth is underestimated, especially in the US, creating a gap between the perception and reality of EU growth prospects. Fears of a further rise of populism were not realised in the May elections, but the shift from mainstream to fringe parties is noteworthy, especially in the UK. Green parties generally fared well, suggesting a possible political boost for ESG-compatible financial instruments.

Insecurity in Japan is waning, with net equity sentiment on the rise and net bond sentiment remaining stable. With China on the defensive, careful stock picking looks like a good preparation for a return to growth in Japan. Sentiment in the UK is so loaded with uncertainty that this is now a market for strong stomachs only. 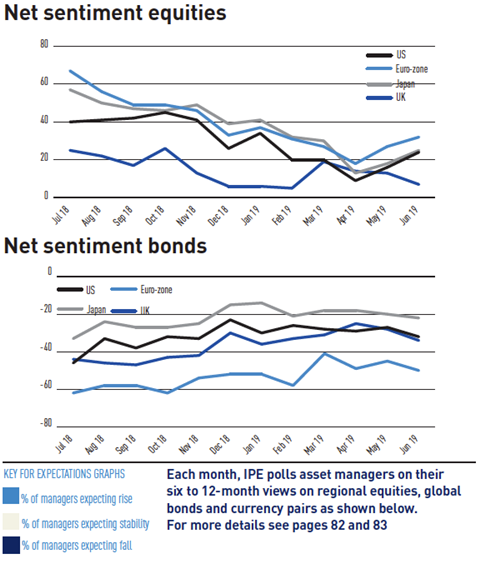