2
Italy: The EU’s next existential threat?

Italy: The EU’s next existential threat?

Italy is widely seen as the next existential threat facing the European Union following the French presidential elections. The country will hold a general election no later than the spring of 2018 amid great uncertainty. The centre-left Democratic Party (Partito Democratico or PD) which has led a government coalition since 2013 is vulnerable to the rise of anti-establishment movements that support Italy’s exit from the euro-zone.

Widespread euro-scepticism could present a threat to the EU in the short term. Vincenzo Scarpetta, a senior policy analyst at think tank Open Europe, notes that the growing support for an exit from the euro is a relatively new phenomenon in Italy. “This is one of the most significant elements within the political debate in Italy today. It would have been unthinkable until before the financial crisis when Italy’s membership of the single currency had never been in question,” says Scarpetta. But Italy’s unsuccessful struggle to return to economic growth (see graph, p63) and a sometimes difficult relationship with the European Commission has fuelled euro-scepticism.

However, Italy’s relationship with the EU can be better understood by looking at the long-term evolution of Italian politics. One of the key trends is the changing role and nature of political parties. Italy’s party system has transformed radically over the past 25 years. In 1992, a huge corruption scandal dubbed Tangentopoli (Bribeville) led to the break-up of Christian Democracy (DC) which had maintained power since the end of the Second World War.

The end of the DC opened a huge gap that was filled by Silvio Berlusconi’s Forza Italia movement. Together with the Northern League (Lega Nord) a regionalist party, Forza Italia is the oldest surviving Italian party in its current form.

This complex picture shows that the crisis of mainstream political parties dates back to the early 1990s in Italy. That none of these organisations apart from the PD contains the word ‘party’ in their name is noteworthy.

The decline of the party as the main link between citizens and government is partly the result of the instability of the electoral system, says Paolo Balduzzi, lecturer in public economics at Università Cattolica del Sacro Cuore in Milan. Italians have seen several electoral reforms in the past 25 years that sought to improve on its proportional representation-based system.

In 2015 the electoral system shifted again to a more proportional one but the latest reform has been deemed unconstitutional and the debate carries on. The new system to be approved before the election will have a great influence on the outcome of the vote. “Electoral laws are made to last. These reforms have changed the incentives for parties to form coalitions and in turn the way parties relate to their voters,” says Balduzzi.

There is a case for arguing that the decline of the party is partially a myth. What is declining is not the institution itself but the legitimacy of traditional parties and the traditional ways citizens interact with them. Monica Poletti, a researcher at Queen Mary University of London, supports that idea. She says: “We live in a world where parties compete with plenty of other after-work activities. It seems that political participation has declined universally because of a lack of trust in parties. To a certain extent this is, of course, true.

“However, party membership has risen in the UK recently and new parties have been gaining support in many countries. Whilst less than previous years, a large number of people voted in the PD primaries. M5S and other movements across Europe have brought people back to city squares. People interact with political organisations online. In other words, there are new parties arising and unconventional ways of political participation. How temporary and representative this phenomenon is, however, remains to be seen.” 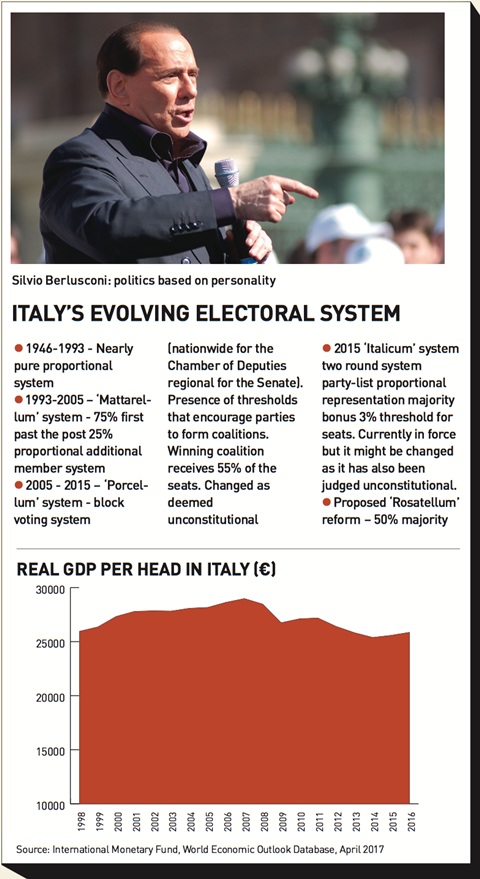 Political theorist Carlo Invernizzi Accetti argues that the transformation of Italy’s party system is part of a wider phenomenon that does not concern mainstream parties specifically. Accetti, who teaches at City University of New York (CUNY) and SciencesPo, in Paris, argues that Europe is experiencing a crisis of the ‘intermediary bodies’ that form civil society such as the church and trade unions.

The decline of these organisations which mediate between citizens parties and government gives way to a brand of personality-based politics Accetti says: “In Italy we used to talk about ‘partitocracy’. Today [former prime minister and leader of PD] Matteo Renzi talks of ‘disintermediation’ and Beppe Grillo, the former comedian and leader of the populist Five Star Movement (M5S), attacks the media and the mainstream parties. This creates a hollowed-out democracy where leaders are more important than parties and citizens are no longer represented effectively.”

According to Accetti, the roots of this phenomenon are to be found in globalisation which deprives states and citizens of political power but also in the declining influence of religious organisations and the spread of technology.

The emphasis on personality-based  politics has grown in parallel with the use of direct democracy. Former prime minister Renzi resigned last year after losing a constitutional referendum which most interpreted as a vote of confidence on his leadership. He was recently confirmed as leader of the PD with a landslide victory in which non-party members were able to vote. Beppe Grillo’s M5S was founded entirely upon the idea of direct democracy and uses online polls to decide on policy matters.

Another key trend is the perceived loss of significance of ‘left’ and ‘right’ as relevant categories to describe the political universe. This is clearly observable in Matteo Renzi’s PD which resembles Tony Blair’s New Labour in its attempt to reconcile the market and the state. Similarly, ‘populist’ parties such as Northern League and Grillo’s M5S mix left-wing elements such as an emphasis on welfare and right-wing ones like immigration control.

The question is whether that distinction was ever useful to analyse Italian politics, according to Balduzzi. He says: “Until 1992 Italian politics did not have a strong right wing. Christian Democracy (DC) was a centrist party. Its opponent, the Communist Party (PCI), had a strong left-wing philosophy but has now become a centre-left party. Even branding Berlusconi’s Forza Italia as right wing party is somewhat problematic.”

While in other European countries centrist parties are suffering, Balduzzi suggests that the centre could play an important role. Under Renzi, the PD has shifted towards the centre and struck alliances with centre-right parties. If this structure holds it could counterbalance the rise of so-called populist parties such as M5S and the Northern League.

Others say that a centrist takeover would not be positive for Italy. Edoardo Bressanelli, a lecturer in European politics at King’s College London, says: “If the centre becomes too strong there is a risk of going back to the pre-Tangentopoli era where there was no realistic political alternative to the DC. Competition in politics is a force for good.” In other words, there is a risk that Italy’s attempt at becoming a modern bipartisan country could fail.

At the same time, Bressanelli says that we should be wary of dismissing the long-term relevance of the traditional left versus right distinction. He argues: “It is risky to declare the passing of the left versus right dynamic. There have been other times in recent history when the focus of political debate had shifted towards topics that are not necessarily to do with redistribution of wealth. Europe itself was almost non-topic before the early 2000s, while now it is the main topic. Underpinning those debates, however, there should always be a distinction between left and right.” Nevertheless, Bressanelli accepts that the more immediately relevant distinction today is between nationalists and globalists.

Accetti agrees that the left versus right distinction is more resilient than commonly thought. However, at present he sees the conflict as being between technocracy and populism. Accetti says: “This is a dramatic turn of events for democracy. Neither technocrats nor populists are truly democratic. Both reject the legitimacy of the other party. Technocrats believe only they possess the solutions to problems on the  basis of their knowledge. Populists, by definition, seek legitimacy as sole representatives of the people and anyone who is against them is against the people.” Accetti suggests that this conflict which kills democratic dialogue is to be linked with the crisis of political intermediation and the rise of personality-based politics.

The question of whether the left versus right rhetoric has broken down is crucial for analysing Italian politics. The distinction, as found in other countries, was never obvious in Italy. It is clear that a transition has taken place from the class politics of pre-Tangentopoli period to a form of personality-based politics today. The corruption scandal was the main turning point for the country. It spelt the end of the centre versus far left dynamic that characterised Italian politics.

However, there is also a strong element of continuity between the two periods that transcends conventional political analysis. What the two periods have in common is relative political instability and the absence of a truly bipartisan system. This is characterised by few governments lasting for the full five-year term, fragile political coalitions and an evolving party system.

Much is at stake in Italy. The path to a potentially historic election next year will be contaminated by the uncertainty over the electoral system. The country could stage a repeat of what happened in France with a last-minute victory of the globalist elite versus the nationalist minority. But the more important question is how these long-term political trends will transform a country that appears particularly reluctant to change.