Tito Boeri’s comments have drawn scorn from the country’s government, which has explicitly targeted a significant reduction of inflows and has closed ports to NGO vessels that rescue immigrants crossing the Mediterranean from the shores of Africa.

His comments were made in Italy’s lower house of parliament at the presentation of INPS’ annual report last week. Boeri said: “By closing our borders, we risk destroying our social protection system.”

“A ruling class that lives up to its name must have the courage to tell Italians the truth: we need immigrants to keep our social protection system on its feet.”

“Immigrants provide a very important contribution to the financing of our social protection system and their function is destined to grow in the next decades,” added Boeri, “while the generations of indigenous workers that enter the labour market will become smaller.”

Matteo Salvini, deputy prime minister and interior minister, who has taken strong measures to stop the inflow of migrants into Italy, hit out on Twitter, saying: “The chairman of INPS continues to be political, ignoring the will to work of so many Italians.”

In a video on Facebook, Salvini said: “Much will have to be changed in these organisations”, referring to INPS and other public bodies.

Boeri pointed to data from the INPS annual report that showed that a reduced inflow of foreign, non-European Union workers in the country would have a negative impact on its social protection system.

As part of the annual report, the organisation modelled the evolution of welfare expenditure until 2040 if the inflow of foreign non-EU workers would be stopped completely.

The report showed that, in the three years before Italy’s economic crisis, 150,000 foreign non-EU workers would join the system each year. At the same time, 5% of the stock of foreign workers, which amounted to around 100,000 people, would leave the labour force.

Assuming that, each year until 2040, the stock of foreign workers contributing to the system falls by 80,000 on average, the report claims that INPS would lose €73bn in contributions from immigrant workers each year. At the same time the organisation would gain €35bn in welfare expenditure directed at foreign workers.

The net balance would be a gap of €38bn in INPS coffers each year. 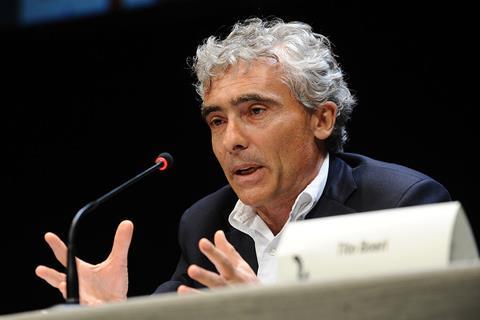 “The inflows of migrant workers compensate the falling birth rates in our country, which is the gravest threat to the sustainability of our pension system”, commented Boeri. The system, he added, is geared to sustain a rise in longevity, but would be put at great risk by further reductions in the numbers of contributors, given the current demographic scenarios.

Former labour and welfare minister Elsa Fornero, who designed a major reform of Italy’s pension system in 2011, told IPE: “We need immigrants, because our ratio of young workers in the labour force is shrinking.”

She added: “My position has always been that we cannot think that immigrants alone can solve our problems in terms of pensions, by paying contributions and then perhaps going back to their countries of origin with a pension that is lower than the sum of contributions they paid in.

“The focus must be on pension reform. But at the same time, we cannot do without a labour market that functions, which means low unemployment, but also a steady flow of immigrants.”