Radical upgrades to the EU’s corporate tax base norms have never been so close to fruition. Enthusiasm is clear in the European Parliament and elsewhere. But doubts still exist. In fact, opposing self interests of a handful of countries, or even just one, could force recourse to fall-back strategies.

If approved, the measures could incentivise companies to prioritise equity capital-raising over debt, potentially lowering the level of leverage in European companies.

This initiative dates back to mid-2015, when the Commission adopted an Action Plan. As reflected in a PwC paper, this was “to tackle tax abuse, ensure sustainable revenues and support a better business environment in the Single Market”.

That move re-launched a previous version of the Common Consolidated Corporate Tax Base (CCCTB), as a solution to profit-shifting. Its aim is to reduce the complexities and compliance costs for cross-border companies. At the same time, it would tackle, and defend the Single Market against, aggressive tax planning from third countries. The measures are set to be mandatory for all companies with an annual turnover of more than €750m.

Also launched by the Commission, in October 2016, was a Common Corporate Tax Base (CCTB) Directive to apply measures including a ‘super-deduction’ for R&D costs and national interest deduction for equity financing (allowance for growth and investment).

In Brussels, welcome is generally prodigious. The European Parliament’s economic and monetary affairs committee (ECON) voted strongly in favour of both the main body of legislation, and for CCTB. Fiery support was expressed by the Dutch MEP Paul Tang, who took an EU perspective.

Tang stated in ECON: “I very much hope that, especially, the large countries, Germany and France, will put pressure on the smaller countries, countries like the Netherlands, Ireland, Malta, Luxembourg that are the pirates within the European Union.”

Politically centre-left, and the rapporteur for the CCTB Directive, Tang pilloried the small countries. He stated: “They come to another country and try to appropriate these countries’ tax bases. These are not the actions of European partners.”

Taking a subtler approach at the ECON meeting, the French centre-right MEP Alain Lamassoure and rapporteur for the CCCTB Directive, described the legislation as “a fabulous opportunity to make a giant leap in the field of corporate taxation…. It would also enable the taxing of the digital economy.”

Lamassoure added: “It would also halt unfettered competition between corporate tax systems within the single market, by targeting profits where they are made.”

The MEP took an optimistic viewpoint of the opposition. He felt that “member states could agree on the measure[s]… there was a very solid front of big countries.” These included France, Germany, Italy and Spain. He thought that the Netherlands and Ireland could be willing to accept common rules, provided that tax rates remained a national prerogative.

Not dissimilarly, from the broader scope of pan-EU business interests, Chas Roy-Chowdhury, of the Association of Chartered Certified Accountants, criticised the continuing co-existence of 28 tax systems “for offering sometimes very diverse tax exemptions and deductions”. Roy-Chowdhury is head of taxation at ACCA.  BusinessEurope’s position is that “CCCTB has the potential to support growth”.

Also positive is Insurance Europe, including on measures designed to counter aggressive tax planning. However, it believes that CCTB, in its present form, would not adequately meet its objectives.

Heated protests from opponents are reflected in a jointly written article in a Brussels-based newsletter. The authors are Dutch MEP Esther de Lange, Swedish MEP Gunnar Hoekmark, and Brian Hayes from Ireland, which has been regularly censured for its 12.5% corporate tax rate.

Hayes, a centre-right MEP, former rapporteur for IORP II and the current shadow rapporteur for the pan-European personal pension (PEPP) project, shared his two colleagues’ view that it would be “disingenuous” to suggest that CCCTB would do much to curb tax avoidance. He said: “Pretending it will comes close to a lie or is at least a serious misrepresentation of reality.”

Asked by IPE if Ireland would block the proposals, Hayes answered that, as about 10 member states had serious issues with them, we are “a million miles from achieving any consensus”. Speaking for Ireland, he explained: “Our taxation system would lose revenue to other member states with no guarantee that the ‘compensation mechanism’ would gain us what we would lose.” A text on Hayes’s own website points out: “It is clear in the EU Treaties that corporate tax rates are decided by member states alone and that should not be changed.” 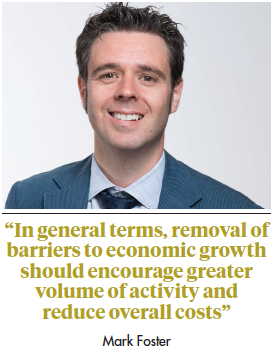 Matthies Verstegen, senior policy adviser at PensionsEurope, cites the potential voting strength of individual members in the Council of the EU. Under the EU’s over-riding Treaty of the Functioning of the EU (TFEU) – derived from the Rome Treaty – its article 115 rules that, because taxation is in question, successful support by member states would require a unanimous vote. That is, any single country could block the tax-base measures.

Amplification of this comes from Mark Foster, of Kreab, the public affairs consultancy. Asked when are we likely to see implementation of both sets of rules, he  answered: “Unanimity in Council is a very high threshold…. Ultimate implementation therefore will very much depend on when political consensus is reached.”

As for any final impact on pension funds, Verstegen considers that the new measures “may somewhat address the existing corporate tax bias towards debt financing”. This bias currently favours companies financing via debt mechanisms, compared with equity, because interest payments are deductible. “If effected, these rules could incentivise companies to more often choose share issues over bonds issues, lowering the level of leverage in companies,” Verstegen  says.

Foster adds, “Politically speaking, tax policy has been under the spotlight and a priority for the Juncker Commission, with several tax files agreed in record time. As a result, in general terms, removal of barriers to economic growth should encourage greater volume of activity and reduce overall costs.”

In the Council, the plan for the current, second quarter, of 2018, is to adjust its compromise texts in the light of an interim report from the OECD and the Commission’s proposals. It would then present “some form” of progress report.

Proponents for the legislation have at least one option if the Council fails to adopt a unanimous decision on the proposal to establish a CCCTB. According to an advice paper from the European Parliament, “the Commission [could] issue a new proposal based on Article 116 of the TFEU [Treaty on the Functioning of the European Union]”. The paper’s recital 4 refers to the relevance of distortion of “the conditions of competition in the internal market”. If this were accepted, presumably by the European Court of Justice, it would enable the issuing of the “necessary legislation” without unanimity.

As a last resort, as revealed by Tang, a system of “enhanced co-operation [involving a group of member states] could be initiated by member states, which could be open at any time to non-participating member states”. This would be in accordance with the TFEU, he informs IPE.

Whatever the outcome, the gestation period of the legislation will have been protracted. As recorded in the Commission’s CCCTB Impact Assessment document of March 2011, the early history of plans to harmonise corporate taxation norms across the EU go back to 1999 at least.