The EU’s controversial mandate for a radical shake up of financial supervision has received a cool reception from the pensions sector as well as smaller EU members. 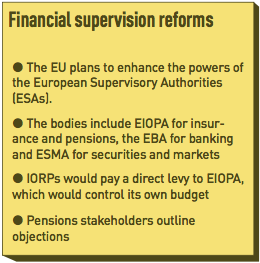 The proposals would amend the governance and funding of all three European Supervisory Authorities (ESAs) with the aim of achieving supervisory convergence through enhanced coordination. Apart from the European Insurance and Occupational Pensions Authority (EIOPA), the other EFAs comprise the European Banking Authority (EBA) and the European Securities and Markets Authority (ESMA). ESMA would

additionally be given extended powers. Also included is the composition of the European Systemic Risk Board (ESRB), which monitors financial stability.

The proposals, were made in a September 2017 communication from the Commission*. The main justification is the need to provide supervisory support to the Capital Markets Union but some of the proposals would affect pensions.

Under the proposals, IORPS would pay a direct levy to EIOPA, which would also be empowered to disclose individual IORP stress test results based on harmonised solvency requirements. EIOPA would be able to intervene on IORP funding levels and set its own budget. EIOPA’s separate occupational pensions and insurance stakeholder groups would be amalgamated. 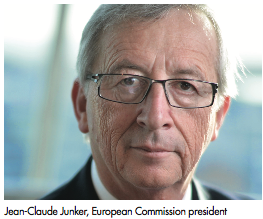 The final decision will be made by EU member states under the qualified majority voting system.

Perhaps unsurprisingly, EIOPA welcomes the European Commission’s proposal. The authority supports “an integrated and holistic approach towards prudential and conduct of supervision”. Divergent supervisory standards and outcomes should be avoided, it argues.

This was reinforced in Jean-Claude Junker’s state of the union speech earlier this year: “Either [we] come together around a positive European agenda or each retreat into our own [national] corners,” the Commission president proclaimed.

In an interim statement, PensionsEurope says its members fear supervisory mission creep. It makes several critical points on the proposals, including on publishing stress test results. 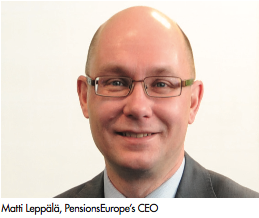 “The European Commission wants to achieve supervisory convergence, so the measures are intended to strengthen the role of EIOPA vis-à-vis the national authorities.” However, it questions this objective as pension funds do not fall under a harmonised European framework.

PensionsEurope states: “The Commission has chosen a one-size-fits-all approach, but what is best for banking or insurance may not work for pensions.”

PensionsEurope continues: “We already get the sense that EIOPA has an insurance bias in its current set-up. The new executive board would have only three permanent members, and more powers. The concern is that they will not have sufficient expertise to appreciate the specificities of pension funds.” 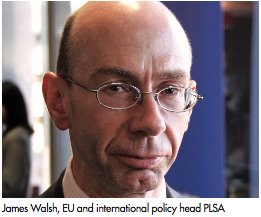 James Walsh, EU and international policy head of the UK’s Pensions and Lifetime Savings Association (PLSA) believes EIOPA should stick to its brief. He says: “The PLSA’s feeling is that EIOPA is too dominated by the insurance sector. If there were a single European supervisory authority (ESA), that might make the problem even larger.” On the proposed levy for supervision, Walsh notes that the total cost could rise, despite a “huge amount of uncertainty over Brexit”.

The Belgian pension fund association, PensioPlus, agrees that data availability and reporting should be improved. It advocates the need for uniformity on reporting requirements and processes between the national control authorities, EIOPA and the European Central Bank (ECB).

However, it does not agree with making larger IORPs report individually on a quarterly basis, as this would raise costs.

Nevertheless, PensioPlus finds that the proposed reporting requirements lack ambition and suggests greater use of the ISIN-code from the Centralised Securities Database for asset reporting.

One adviser to a Dutch pension fund  fears the encroachment of insurance-type solvency standards into occupational pensions. Under the new mandate, EIOPA would be able to intervene on funding levels set by national supervisors. Yet EIOPA’s 2013 Quantitative Impact Study for IORPs showed that using the authority’s prudent discount rate could lead to a 30% increase in liabilities.

And allowing EIOPA to set its own budget could burden the pension sector with no effective control mechanism at the European Commission, the adviser concludes.

Patrick Starkman, partner and head of the Brussels office of the law firm Samman, has a background in external relations for ESMA. He gives a high rating to the chances that the European Parliament will reach an agreement on the Commission’s supervisory agenda, but says negotiations will be tough in the Council. An institutional agreement on the ESAs’ new governance regime should be reached before the end of 2019, he says.

Yet smaller members spoke against. Ireland’s ambassador, Declan Kelleher, said his country did not believe the proposals would enhance the CMU and would add complexity and cost. Sweden expressed surprise at the proposals.

However, prior to the final decision, each of the sides are likely to table a plethora of compromise amendments. A crucial aspect is that time is short, as the current Commission’s mandate ends in November 2019.