Letter from the US: Plans act on Trump tax reform

The tax reform signed by President Donald Trump last December is having quite an impact on the US pension industry. Indeed, anticipation of the reform already triggered developments last year.

“The reform has lowered corporate taxes from 35% to 21%,” notes Alan Glickstein, senior retirement consultant at Willis Towers Watson. “That has given plan sponsors the opportunity to increase contributions before the new rules become effective. In fact, contributions to pension plans are deductible, so their value will go down with the new taxation.”

According to Willis Towers Watson, which analysed 389 Fortune 1000 companies that sponsor US defined benefit pension plans and have a December fiscal-year-end date, these companies contributed $51bn (€43trn) to their pension plans in 2017, nearly double the amount needed to cover benefits accruing during the year.

“Plan sponsors are likely to go on making extra contributions,” says Glickstein. “Because pension funds have time until 15 September 2018 to get contributions that are accounted as if done in 2017.”

Rohit Mathur, who leads the global product and market solutions team within the pension risk transfer (PRT) business at Prudential in the US, has calculated how big the savings could be. A sponsor with a $1bn plan that is 85% funded could generate about $40m net present value (NPV) benefit by fully funding its plan today versus funding the plan deficit over a 10-year period. “Such NPV savings,” says Mathur, “are generated by eliminating variable premiums paid to PBGC (Pension Benefit Guaranty Corporation) and deducting the contribution made now for the 2017 plan year at a 35% tax rate.” 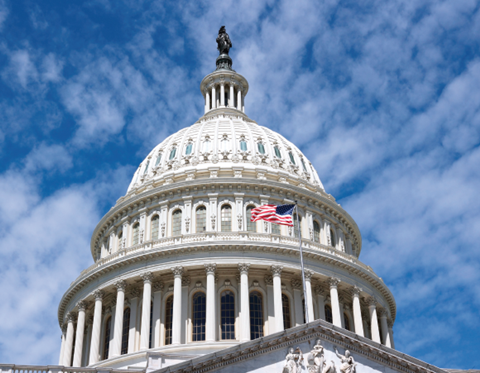 The Capitol in Washington: tax reforms have prompted DB sponsors to make extra payments to pensions

Cash for the extra contributions may come from the repatriation of earnings that is incentivised by the tax reform, points out Mathur. “Many companies will use that cash to fund their domestic needs, including contributing more to their pension plans. Other companies may take advantage of low borrowing rates and issue debt to fund their plan contribution, as many already did in 2017, including FedEx ($1bn), Delta Air Lines ($2bn), DuPont ($2bn) and Verizon ($3.4bn).”

“If interest rates go up and equities stay strong, the funding status will improve further,” says Glickstein. “And if it approaches 100% it will be easier for plan sponsors to engage in shrinking their size or simply offload all their liabilities to insurers. That would make sense because even if a pension plan is frozen, it is very expensive to manage. Premiums paid to PBGC, for example, are rising from 3.4% today to at least 4.1% by 2019.”

However, the situation is complicated. “If a pension plan quickly reaches more than 100% funding, as happened between 2006 and 2007 when the average funding status went from 99 to 106%, the plan may end up having the extra assets trapped,” says Glickstein. “According to the law, 50% of the surplus is taken by the government with extra taxes.”

Another effect of the tax reform is explained by Michael Schlachter, US defined benefit leader for investments at Mercer. “The decrease of corporate taxes will make companies rethink their capital structure,” he says. “In order to raise cash, they may find debt less attractive than equities, because interest deductibility gives them less benefit with 21% taxes instead of 35%. We also believe that pension funds’ trend of downsizing and de-risking will continue.”

One way of de-risking is to invest more in debt than in equities, to better match assets with liabilities and be ready to transfer liabilities to insurers. “This trend will accelerate the imbalance between demand and supply of high-quality corporate bonds: the yields of the long-term ones have already decreased during the last 12 months, in spite of the Fed’s raising interest rates says Schlachter. “To achieve the same type of duration that a pure corporate bond portfolio could provide, we advise our clients to adopt a ‘market-efficient hedging portfolio’ – an opportunistic fixed-income strategy which also uses derivatives and guarantees high liquidity. This portfolio must be slowly built and in the end would be ‘insurance ready’. It could be transferred to insurance companies, minimising the costs of de-risking.”