There has been an unintended consequence to the increasing popularity of liability-driven investment (LDI). While it has fostered greater awareness of interest-rate risk and how best to manage it, schemes need to be aware that there might be a mismatch between the discount rates used to value liabilities and the instruments used to hedge against changes in that value.

Before the financial crisis, there was another benefit to using interest-rate swaps: they had a higher yield than Gilts. That changed in 2008.

“Before the financial crisis, annual long-dated Gilt yields were around 20 basis points lower than long-dated interest-rate swap yields but during the crisis, Gilts suddenly starting yielding around 80bps more than swaps,” says David Hickey, director of European advice at SEI. “That change in the relative yields of bonds and swaps meant that it made much more sense for pension schemes to hedge interest rates using Gilts rather than swaps.”

However, most pension schemes would rather not allocate too much capital into bonds, even if the yield on these instruments is higher.

“A new class of fixed income instruments was born – synthetic Gilts, which allowed pension schemes to access the higher Gilt interest rates without having to invest capital,” he says. “There was a material switch from interest-rate swaps into Gilts by both pension schemes and insurance companies both during and after the crisis.”

Ditching interest rate swaps for synthetic Gilts – that is, Gilt total return swaps or Gilt repo – had another advantage for pension schemes: Gilt rates are usually equivalent to the discount rate used to calculate the pension fund’s liabilities.

Denmark’s ATP stays ahead of the curve

“However, we used instruments other than Danish interest rate swaps for hedging the liabilities, which created a mismatch with the discount rate curve,” says Anders Hjælmsø Svennesen, Co-CIO of investments.

“We are still using a highly conservative discount rate policy – it’s just that the rate now accurately matches the instruments we use to implement our hedging policy,” says Svennesen.

Svennesen says: “By using government bonds, we generated 130 basis points of additional return and improved the quality of the hedging portfolio.”

ATP aims to adhere to – but not exactly replicate – its discount rate. Svennesen says: “It’s difficult to perfectly match the discount curve, but we will remain close to the weights of each instrument used to calculate it.”

The ability of the synthetic Gilt yield to better match the discount rate used to value liabilities illustrates an important point: pension schemes may be taking on additional risk if there is a mismatch between the rates used to value the liabilities and the rates of the actual hedging instruments.

However, pension schemes cannot only use synthetic Gilts as hedging instruments. Because they are short-term instruments that have to be rolled to maintain exposure, that brings additional risks. So while they are useful, they should only be a component of an LDI strategy, Hickey advises.

In addition, the differential between annual long-dated Gilt yields and their interest-rate swap equivalents has recently tightened to the 20bps mark and might well revert to historical norms.

To determine the future direction of fixed income and swap rates, it’s useful to understand what drives the spread differential between the two instruments. Supply and demand is an important factor.

Alasdair MacDonald, head of investment strategy at Towers Watson, says: “When swaps yielded more than Gilts, there was relatively little government issuance but a large amount of corporate issuance.” While corporates usually issue a 10-year fixed-rate bond, they usually want a floating loan and so issue a swap, he adds.

During the financial crisis, however, corporate borrowing dried up, while governments issued a large quantity of debt to stabilise the economy, which caused the supply of government bonds to be higher than swaps and hence their yields to be lower.

If the economy continues to recover, however, more normal circumstances should resume, which will makes it more likely that interest-rate swaps might become higher yielding than bonds once again and thus the hedging instrument of choice.

As LDI managers often have mandates to use whichever hedging instrument represents better value, it is important pension schemes are aware of the issue, says Philip Rose, chief investment officer for strategy and risk at Redington.

“That means trustees need to be aware of the potential mismatch between how the discount rate is calculated and the hedging instruments,” says Rose. 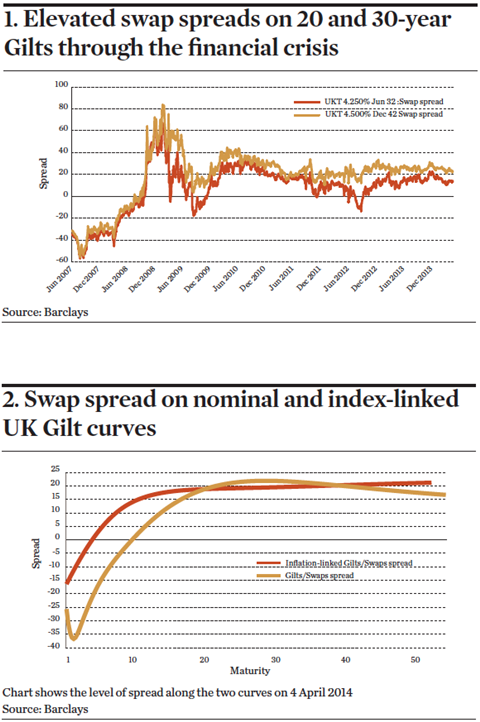 Dan Mikulskis, co-head of ALM & investment strategy at Redington, says: “When LDI was first introduced, the focus was on capturing the interest rate risk and there was less focus on whether there was a difference between interest rate of the hedging instruments and the discount rate.” But this differential is becoming more important as schemes increase their hedging ratios, he adds.

For a typically under-hedged pension scheme, the mismatch is not insignificant. “Even a 25 basis point difference between swaps and Gilts on scheme with a 25-year duration translates to a 6% difference between the market value of the scheme’s assets and the liabilities,” he says.

If, however, the scheme had a high hedge ratio and used swaps to hedge but Gilts to form the discount rate, that would have a much larger impact. “That’s a similar order of magnitude to the value of equities falling by 15% in a portfolio that has 40% invested in stock markets,” says MacDonald.

Serkan Bektas, co-head of solution design at Insight Investments financial solutions group, says: “While the mismatch between the discount rate and the rate of the hedge instruments can create risks, it can also create an opportunity to add value by making the hedge cheaper, if it’s implemented in a risk-controlled manner.” That can be achieved by making sure there is a good investment rationale for using a mismatching hedging instrument.

Trustees also have another option: change the discount rate to better match the hedging instruments used. MacDonald says: “A scheme’s actuary will choose to value the liabilities in a way that will be consistent with how the assets are actually invested.”

If an actuary has chosen, for the sake of simplicity, to value the liabilities using Gilts and the scheme uses interest-rate swaps as hedges, there is no reason why the actuary couldn’t start using swap rates to discount the liabilities, adds MacDonald.

The actuary’s flexibility extends to beyond simply choosing either Gilt or swap rates: they can create a hybrid rate that mirrors the proportion of swaps and Gilts in the scheme’s portfolio, he adds.

“At the moment, the mismatch between liability discount rates and hedging rates is not a significant issue for most pension schemes as they are both underfunded and under hedged,” says Phil Page, head of LDI at Cardano. “But, as funding levels and hedging ratios improve, it will be an area that they will have to look at much more closely.”