Liability-Driven Investments: The other 30%

Let’s imagine you manage a pension fund that has hedged 50% of its interest rate risk, with a plan to get through the other half as rates rise and your funding level improves, and forward rates a year or two out are edging closer to the de-risking trigger points you have set. Wouldn’t it be great if you could get someone to pay you up-front for the privilege of paying you your fixed trigger rate, in two years’ time, in the event of markets going through that trigger?

Lucky for you, this is precisely the arrangement you enter into when you sell a payer swaption. You might sell £100m (€122m) of notional interest rate exposure through a 20-year payer swaption expiring in two years (‘2Y20Y’), with the strike set at 3.8% (just above today’s 2Y20Y forward rate of 3.5%), for a premium of £1.5m. When the swaption expires, your counterparty can exercise a 20-year payer swap that pays you 3.8% fixed (which, of course they will if rates have surpassed that level).

If the 20-year rate doesn’t reach 3.8% within two years, the option expires worthless and you keep the £1.5m. If it does, you lose the flexibility to lock in a higher rate than 3.8% – but you must already have made a strategic decision that this was the rate you needed for this chunk of your de-risking. And, by the way, you still get to keep the £1.5m.

As well as the premium you get paid, swaptions formalise your trigger rates, removing the risk that governance weaknesses overturn strategy in the face of volatile rates; and while the swaption will not be delta-one from the first day, it clearly has more delta than a non-existent position – so you will also get some immediate hedging benefit, fluctuating with volatility and time to expiry.

Of course, hardly anything is a no-brainer in finance. Transaction costs can mount up if you want to keep rolling the position in the event that rates don’t go up. More importantly, the flipside of the formalisation of trigger points is that relinquishment of flexibility. Somewhat ironically, this is particularly acute with swaptions because, unlike most equity options, they can only be exercised at maturity: if you imagine rates spiking up and back down through the strike rate three months before maturity, you can also imagine the frustration, at expiry, of having seen an opportunity to hedge go begging, leaving you with the costs of putting another swaption in place (probably with a lower premium).

“If monetising triggers was really a no-brainer you’d logically just push the swaption term out to increase the premium you receive,” explains Robert Gall, head of market strategy at the financial solutions group of Insight Investment. “But there is this regret risk, and lengthening the tenor just lengthens the period over which you risk rates spiking through your trigger rate and falling back again.”

Still, this risk can be managed with well-constructed swaption ladders set at different strikes and tenors, and overall the strategy is an obvious advance on simple trigger-points.

So, what will you do with the money earned from selling payers? You could use it to buy downside protection in the form of equity options. The more likely move is to stay in the rates world and buy protection for the other 30%, say, of your liabilities that remain unhedged, against a sharp fall in yields.

You would do this by buying a receiver swaption. Let’s imagine you still have £40m of 22-year rate risk to hedge: you might buy a 2Y20Y receiver swaption with a strike of 3.0%, paying a premium of £1.5m. If rates fall through 3.0% and are still there in two years’ time, you get to protect yourself from the adverse affect on your liabilities beyond 3.0% by exercising a receiver swap; and in the meantime you pick up some delta that gives you a certain amount of mark-to-market protection.

• Selling payer swaptions can generate income from a triggers-based LDI programme.
• That income can be used to buy downside protection in the form of receiver swaptions.
• Swaptions are used more by Dutch and Danish pension funds, but overall there is surprisingly muted interest.
• This is partly down to complexity, and at the moment that is not helped by adverse pricing.
• But swaptions may come into their own as pension schemes approach full funding, deployed in a much broader range of strategies.

This payer-receiver structure is called a ‘collar’.

The amount of premia you pay for the receiver and get for the payer will depend upon where each strike rate is set, the tenor of each swaption, and how markets are pricing interest-rate volatility – but, clearly, the position can be engineered with a zero net premium. 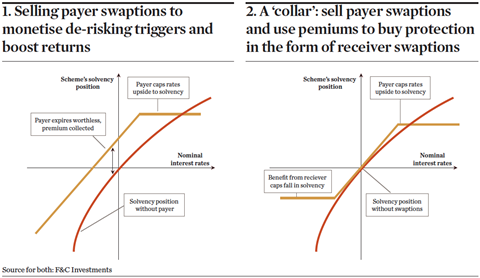 It is perhaps surprising not to find pension funds falling over themselves to get involved in swaption strategies.

“There is discussion about how swaptions might be used by pension funds in the UK, particularly for those with defined triggers that could be monetised, but I’m not sure that the discussion has translated into a great deal of activity,” says David Rae, head of LDI solutions, EMEA at Russell Investments. “Most are still focused on the first-order question of how they should hedge their interest rate and inflation exposures.”

The picture is different in the Netherlands and Denmark, where regulation sets minimum solvency buffers.

In the Netherlands, for example, that buffer is set at the level of a one-in-40-years adverse event, so there is a solvency benefit to be had from buying a receiver swaption at a strike that protects against that contingency.

“The Dutch investors see this as a strategic tail-risk hedge,” says Phil Page, client manager at Cardano, which has been implementing swaption strategies for Dutch clients since 2001.

As such, Dutch investors tend to buy long-dated swaptions – typically with 3-5 year tenors. Without that regulatory incentive, UK schemes that do buy protection for their unhedged liabilities tend to buy receivers with 6-12 month tenors: rather than buying strategic tail hedges, they are often locking in a minimum funding level around a specific event.

“Given the long time horizon that most UK pension funds have, this is primarily used to protect against an actuarial valuation at a certain time,” explains John Dewey, managing director in the multi-asset client solutions group at BlackRock. “A corporate sponsor may be planning some kind of activity, such as an M&A transaction, and wants certainty about future pension funding at that date – or it may want to implement a buy-out on a portion of the liabilities within a certain timeframe.”

One reason investors may not wish to use swaptions strategies would be unfavourable pricing.

“Once getting protection on the downside starts to cost more than 1% per annum, it starts to become an annoyingly high amount of money,” as Kenny Nicoll, a director in manager research at Redington, puts it. “Similarly, when you’re trying to monetise the upside, once you are receiving less than 2%, why bother?” 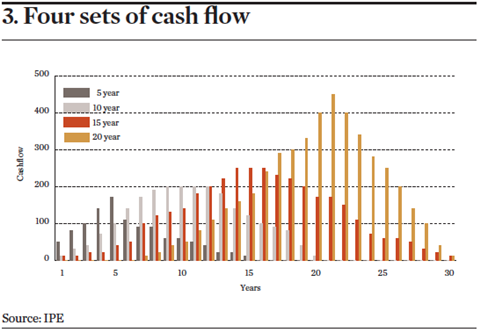 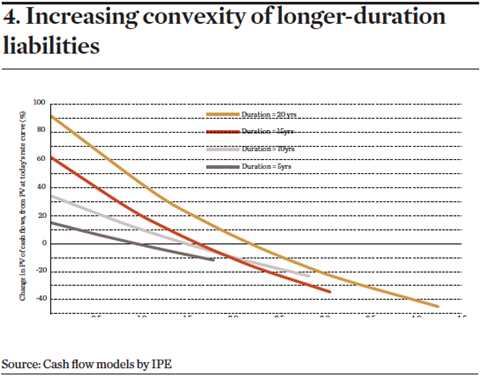 Pricing may be stifling activity right now because the skew between the price of upside interest-rate volatility and downside volatility is against the upside. In other words, to balance the premia on selling a payer and buying a receiver with the same tenors, the receiver strike rates have to be much further out of the money than the payer strikes: putting on a straight zero-premium collar means taking a lot of downside risk in your unhedged liabilities relative to the meagre level of the rate you would lock in with your ‘trigger-point’ payer.

“A year ago, it was exactly the opposite and you could monetise the upside, but right now the option you are selling is very cheap,” says Nicoll.

There is a lot of anticipation that a wave of de-risking is about to be done after bond yields popped up in the second half of 2013, which has resulted in upside rate volatility being priced to be much more constrained than downside volatility, as rates are expected to keep on bouncing back from pension funds’ trigger points.

Current pricing does not necessarily preclude all swaptions-based activity. Investors can improve the cost-effectiveness of a plain-vanilla collar by transforming it into a receiver-spread collar, which involves selling a second receiver at a lower strike than the one you have bought: you get protection from falling rates down to the second strike but are exposed again beyond that.

And there are ways to exploit low-cost payers, too. If you have a portfolio of swaps hedging your interest rate risk, the falling value of those swaps when interest rates rise will be more than offset by the falling value of your liabilities – but that doesn’t alter the fact that you need enough liquid collateral for the variation margin. If you know a 250 basis point rise in rates will use it all up, why not buy a cheap payer swaption 250 basis points out-of-the-money to provide a source of new collateral in that event, preventing you from having to plunder your illiquid assets?

Interestingly, this moves us from thinking about swaptions as a tool for dealing with the section of your liability risk that remains unhedged – a sort of contingent extension of your LDI strategy – towards thinking of them as a tool within your strategy. What it does, effectively, is use a payer swaption to remove some or all of a hedge that you have on via a receiver swap, past a given level of rates.

That reinforces the importance of hedging against downside rate risk. But it arguably makes a case for being able to taking a hedge off, both to manage collateral more efficiently and to regain some exposure, when discount rates start to rise.

“We don’t see investors using swaptions to take hedges off,” says Dewey at BlackRock. “By and large, hedging is still seen as a one-way street – and of course most schemes are nowhere near fully-hedged, anyway.”

As Dewey notes, schemes are more concerned to get their unhedged 30% sorted out before they start tinkering around at the margins. But as investors grow more confident that we have reached the bottom in bond yields, interest in ways to exploit the asymmetry of the risk might grow.

“Giving some more thought as to whether linear hedges are the right sort of hedges to put in place today is worthwhile, to avoid some of regret risk in the event of rates selling off,” as Andrew Giles, solutions CIO at Insight Investment puts it. “It’s early days for that because the consensus is that rates will remain at these levels for some time, looking at where the forward curve is already, but at some point it might be logical to look at different ways of hedging than giving away all of that upside.”

The case becomes even stronger as schemes become better funded.

“These instruments might become useful to add value as schemes move through time in a 100%-funded, self-sufficient state,” reasons Jonathan Crowther, head of UK LDI at AXA Investment Management. “They might want to take some interest rate and inflation risk, tactically, precisely because the world won’t all be the same way around as it was back in 2014, all pension funds were moving towards liability-matching assets.”

There is a lot that can be done with swaptions, both to improve the flexibility of existing LDI mandates and deal with contingencies affecting that rump of unhedged interest rate risk. More activity in these markets seems likely, not only as investors get to grips with their complexity and pricing, but also as they get more and more of their de-risking behind them.