3
Liquidity: Are emerging markets roaring back?

Liquidity: Are emerging markets roaring back?

• This year looks set to be a turning point for emerging markets.
• Two key themes are the possible peaking of the dollar and the pick-up of the Chinese economy.
• Private sector liquidity is heading higher from its long-depressed levels.
• Asset allocators should increase their holdings significantly in emerging markets relative to developed markets.

The key reason is the notable recent improvement in both the quantity and, more importantly, the quality of liquidity flows to EMs. Not only have both foreign investors’ net inflows and domestic private sector liquidity jumped higher (virtually across the geographic spectrum of EMs), but the currency-sapping dominance of EM central bankers has taken a step backwards. Therefore, foreign interest is increasing in what are fast becoming more healthy cash-generating economies, with the prospects of greater future currency stability. EM debt looks a compelling opportunity, not least because the mix of liquidity is reducing liquidity risks and at the same time underpinning the local currencies.

Liquidity is the ability of each national economy to generate cash and, looking forward, EM inflows have taken a decisive step upwards. The charts in figures 1 and 2 describe the EM liquidity conditions compared with developed markets (DMs). Since 2010, DM liquidity has significantly and obviously outpaced the lacklustre flows into EMs. But today there is a clear reversal. June 2016 proved the first time for some years that EM liquidity outpaced DM liquidity. Based on past relationships, this is enough to signal a period of upcoming EM outperformance.

Two investment themes appear to be playing out across EMs. First, the dollar may have already peaked and second, the Chinese economy is expanding faster. 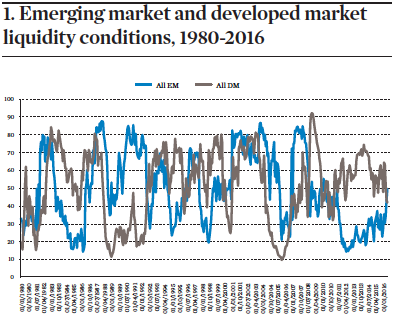 A slightly weaker dollar helps in several ways. For those trade-sensitive EMs that peg to the US currency it improves competitiveness. But it also takes pressure off local policy-makers, who may be reluctant to ease monetary conditions against currency concerns. A weaker dollar typically boosts commodity prices, which helps EMs. Finally, a falling dollar encourages greater cross-border lending flows from the euromarkets into key areas like EM trade finance.

The pick-up in China is equally important, as it has surpassed the US as the key economy for EMs. For example, the first principal component (a statistical term) of EM capital flows is unambiguously driven by the Chinese business cycle. But China is picking up economically, and while the time of double-digit GDP growth rates may well have passed, acceleration back to a sustainable 5-6% trend growth rate would be welcomed.

Many investors have failed to spot the recent key inflection in Chinese economic policy following the tightening instigated through 2015. The People’s Bank of China (PBOC) is again expanding credit and fiscal spending on infrastructure is being rushed out. In short, fast-rising commodity prices are a bellwether of the weaker trend in the dollar and the stronger trend in China: the evidence from liquidity data shows that EMs are already similarly tuned in.

The key point that emerges from figure 3 is that private sector liquidity, which tends to be dominated by swings in corporate cash flows, is heading higher from its long-depressed levels. In addition, foreign flows have rebounded smartly from their September 2015 lows, led, according to figure 4, by gathering foreign interest in emerging Asia. The lessening relative importance of EM central bank liquidity provision points to more stable currency markets ahead because, from experience, more ‘money printing’ tends to weaken currency units, whereas greater private sector profits tends to strengthen them. Since our oft-quoted rule is that every EM crisis is first and foremost a currency crisis, these greater odds of currency stability surely radically reduce the possibility of another EM sell-off.

The implications of this improvement in domestic private sector liquidity (relative to central banks) and in foreign capital inflows focus, respectively, on the currency and fixed-income markets. From this base, domestic equities should benefit significantly. Debt market performance, as measured by the narrowing yield spread on the Bank of America/Merrill Lynch emerging market high yield series, should improve directly with greater foreign interest. Figure 5 shows the movements of this spread compared with our index of cross-border inflows (inverted and advanced by three months so that it leads).

The implication is that asset allocators should substantially increase their allocations to EMs over DMs. EM debt looks a compelling opportunity, not least because the mix of liquidity is reducing liquidity risks and at the same time underpinning the local currencies. Our key investment preferences for 2016 have and continue to be commodities and credits, but somewhere in this mix there are strong grounds for adding substantially to emerging markets.

Michael Howell is the managing director of CrossBorder Capital