It is human nature to reduce the complexity of reality to simple rules, simple foci and simple decision points. In this, Brexit is no different.

Since this whole act of gratuitous self-flagellation kicked off with the referendum of June 2016, clear and often evangelical boundaries have been drawn between Leavers and Remainers, between the European Union and the UK, between doomsayers and modern-day Panglossians.

Emotion has been the primary driver, with Britain either heading off towards Empire 2.0 on a runway of free trade agreements, or cocooning itself on a solitary island (or few) to slowly decay and crumble into global insignificance. Both lack the tinge of realism and historical precedent.

Yet everything is focused on and painted in terms of a single decision point in time. The world as we know it is scheduled to come to an end at 23.00 UK time on 29 March 2019. All events leading up to it – the frantic scrambling for a deal, the dissent and histrionics, the hand wringing among commentators and bystanders – are focused on what happens then.

The sum of all the complexity of two vast economies and their future paths has been reduced to a point, thanks to our inability to look past the immediate future. There are some valid reasons for this, such as the importance of ensuring some base level of continuity, so that planes can fly, goods can physically move (tariffs notwithstanding), and the UK does not end up in a regulatory or legal limbo. A date also focuses our distracted minds.

Yet, in all the fervour over deal or no-deal, there is a risk of losing sight of longer-term challenges for both, and ignoring the important at the expense of the urgent. 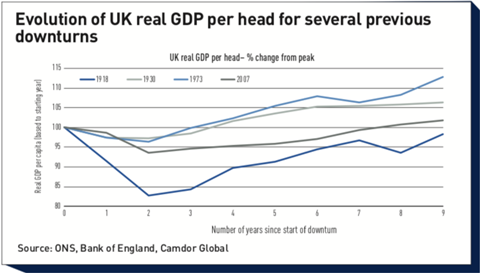 Much of the debate and analysis has focused on Britain’s ability to negotiate free trade agreements from outside the EU and the impact of   different scenarios on UK GDP. Most agree UK GDP would suffer in the immediate aftermath as the currency weakens, investment stalls as the fallout is assessed and households save more in the face of uncertainty. Past that, however, the long-term impact is uncertain and the analysis speculative. Trade deals take years to enact, not months.

What is hardly discussed is the impact on Europe and the structural challenges for both. Those are the key questions where real risks to these economies lie. It is these that will inform their future paths most.

For Europe, the past two years have been strong ones. After anaemic growth and worries over the peripheral economies, the euro-zone economy has picked up again, while Brexit has had a positive revitalising impact on the European project by providing a common enemy for a ragtag bunch of quarrelling cousins to unite against.

But 2019 beckons a resurgence of internal squabbles, as France and Italy have most recently demonstrated. Populism has not died and it is returning to the fore.

The furore over ‘Grexit’ demonstrated the dramatic impact and turmoil that the potential exit of a small country could have on the far larger EU. The exit of the UK in this context is a far larger and more damaging hit, given that it is the second-largest economy in the euro-zone after Germany and the third-largest contributor to the EU budget, contributing a net £8.9bn (€10.2bn) in 2017.

That last is the hole that will be left in the EU’s budget post Brexit. Europe can ill afford – literally – such an exit, given its continued fragility since the global financial crisis.

Yet, this shortfall comes at the same time as the European Commission begins – in parallel with Brexit – to negotiate the next multi-annual Financial Framework (MFF), setting out its spending plans for the next budget cycle beginning in 2020. These already torturous and acrimonious discussions are likely to become even more fraught.

The Brexit divorce bill will see the EU through to the end of this decade but thereafter the budget will need to be trimmed or contributions increased in Britain’s absence. That is in the face of strong vested interests, a bias towards the existing order, and the need to ensure that the result is politically palatable.

Net contributors such as Germany are unlikely to countenance a greater contribution, favouring austerity, while others will be loath to see a reduction in reconstruction funds or the Common Agricultural Policy.

Alongside, the complex web of debt that prompted the European sovereign debt crisis still lurks beneath the surface. Since 2008, the monetary accommodativeness of the European Central Bank and the divergence in economic performance has translated into a chasm of TARGET2 balances, as money has flowed out of the peripheral EU economies while trade and capital flow imbalances have built up.

Once-obscure accounting entries now represent in stark terms the monies loaned across countries and the risks incurred should any begin to dissent under domestic pressure, as Italy most recently is threatening to do with its recent budget. The result is a fragile game of political Jenga where a small dislodged element could result in economic contagion.

Meanwhile, across the Channel, Theresa May, the UK prime minister, has talked of the end of austerity. That seems to be little more than frantic political juggling to appease in the short term.

The 2018 Green Budget from the Institute for Fiscal Studies, an independent think tank, indicated that an end to austerity would necessitate £19bn more a year on public services by 2022-23.

That seems impossible without substantial borrowing, increased taxes or strong economic growth. The first has been ruled out as the government seeks to balance the books. The second is politically unpalatable as elections grow nearer. The third would require a sea-change in the economic path the UK has followed over the past decade.

The fruits of past austerity have not been kind. A decade after the last financial crisis began, the UK has followed a weaker path in terms of GDP per head that it did in the aftermath of the Great Depression of the 1930s or the oil-induced shocks of the 1970s. Only the decade in the aftermath of the First World War fared worse, as Britain absorbed the costs of war, endured a painful correction and sought to find its way in a new world.

For both, the demands to make up the shortfalls of funds will be many and there are wider tensions as people tire of stagnant real wages. The only way to square that circle will be a laser focus on igniting growth, but thinking ahead, planning and having a clear economic strategy seems to still elude policymakers on both sides as they focus on that single near-term date in March.

Come post-Brexit, austerity is likely to be Britain’s biggest export to the EU.