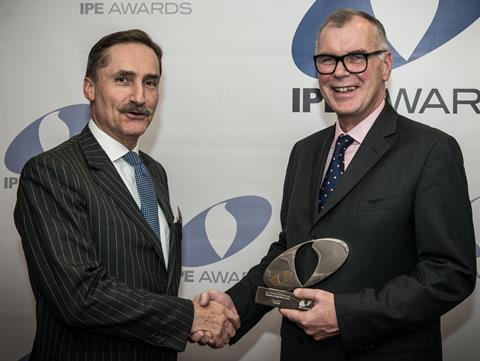 Accepting the Gold Award for the Best European Pension Fund, the PPF’s executive director of financial risk Martin Clarke said the win was a “fantastic and tremendous” endorsement of the UK lifeboat fund’s work.

“It’s great to recognise the asset owners of this industry, the ones who make the decisions, place the money and provide that link between the markets and the beneficiaries,” he added.

Peter Borgdorff, director at PFZW and a veteran of the Dutch pensions industry, won the Gold Award for Pension Fund Personality of the Year, while Richard Balfe, chairman of the MEP Pension Fund for European parliamentarians, won the Outstanding Industry Contribution Award.

Borgdorff said he was collecting his award on behalf of PFZW’s members – workers within the health and welfare sector – and stressed the importance of working on behalf of the beneficiaries.

Balfe, meanwhile, said he was “very surprised and deeply honoured” to be collecting his Outstanding Industry Contribution Award.

“My principle in all the things I’ve done in pensions over the years has been to remember that the basic duty of pension funds is to pay pensions to pensioners,” he told attendees at the dinner.

“We must never forget that, were it not for the pensioners, we would have no job left at all.”

NEST Corporation landed both the DC/Hybrid Strategy Award and the Risk Management Award.