Opinions of Japan as a market tend to be quite polarised and the country has looked cheap on a valuation basis for quite some time, both historically and relatively.

However, is the story different this time and what does the data tell us?

Many domestic fund managers remain optimistic, placing faith that the ‘Abenomics’ rally, forged by prime minister Shinzo Abe in 2013, is likely to continue. As a reminder, Abe’s three arrows are centred on monetary policy, fiscal measures and growth strategies. These policies are driving the economy toward a growth trajectory and, so far, the objectives seem to be working.

The Abe administration has been working proactively on long-term initiatives to address Japan’s changing social structure, such as the ageing and shrinking population. In addition, the government has positioned promoting economic growth and structural reforms to support the economic recovery as its top priority and continues to coordinate with the Bank of Japan (BoJ) on the policy front. With the government focused on economic policy, the likelihood of the BoJ switching to a very tight monetary stance is low, underlining the country’s continued monetary-fiscal co-ordination.

Additionally, and importantly is the change we are seeing in terms of corporate profitability. Companies are experiencing all-time high profit margins. While yen depreciation has always been a factor in profitability, it’s important to note that profit margins are diverging from currency movements, more driven by productivity improvements such as labour-saving automation.

Historically, equity investment has been dominated by external investors but, year-to-date, there has been a significant increase in domestic investment.

Finally, with the 2020 Olympics in Tokyo not far away, preparations are in progress, and this infrastructure development will support the economy and should encourage investment activity.

In summation, Japan’s outlook remains positive relative to that of other countries and regions.

Further supporting the overall equity market and ETF market in Japan is the BoJ. In 2010, the central bank began its ETF purchasing programme. The objective of the programme was to encourage a decline in longer-term interest rates and various risk premiums, with a view to further enhance monetary easing. The BoJ has been buying ETFs tracking the TOPIX, Nikkei 225 and the JPX-Nikkei 400 indices.

Many critics have argued that the BoJ involvement through its purchasing programme has distorted the governance of Japanese companies. However, this is a common misconception, as asset managers continue to manage the proxy voting rights for the ETFs owned by the BoJ.

The BoJ’s ETF purchases, which are currently targeted at ¥6trn (approximately $54bn) annually, have no doubt supported the market. At the bank’s meeting in July it was decided to shift more of its purchases into the broader TOPIX Index, and away from the Nikkei 225 index. The composition of the Nikkei 225 index means that the top 10 stocks account for approximately 33% of its overall total value.

By contrast, the TOPIX index holds a significantly broader range of stocks and stock weightings are less concentrated (the top 10 accounting for 16% – half the equivalent amount for the Nikkei 225). Unlike the Nikkei 225, the TOPIX is free-float adjusted and market-cap weighted (figure 1). 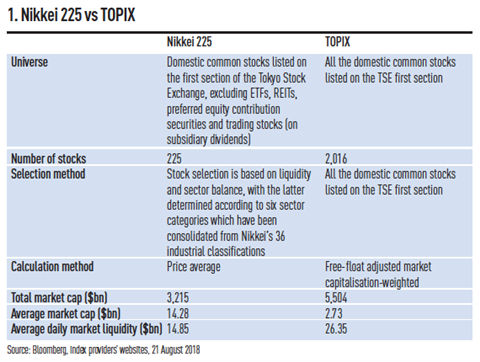 The BoJ announced at its monetary policy meeting in July that it intends to continue purchasing ¥6trn of ETFs over the next year. However, its attitude has changed slightly. The BoJ indicated that if market or economic conditions change, it could decelerate ETF purchases. It is worth bearing in mind though that purchases should remain at the current rate if equities decline. This would reduce one bullish factor for the market. But the 50% reduction of the amount of bank reserves subject to the BoJ’s negative interest rate is positive for banks’ profitability and to a degree clears negative fears about the whole policy. This should help the overall equity market.

A massive and growing ETF market

The growth of the Japanese ETF market has been phenomenal. Asia is the third-largest ETF market globally and Japanese-domiciled ETFs dominate the Asian ETF market, accounting for more than half. As of 31 July 2018, the total AUM of ETFs listed on the Tokyo Stock Exchange was $324bn.

Figure 2 illustrates the huge amount of growth. Most investment has come from the BoJ, but many regional banks in Japan are also entering the market due to negative interest rates and to gain a better return on their reserves. Additionally, retail investors in Japan and overseas investors are identifying economic indicators to be supportive for growth in the Japanese stock market and ETFs act as an efficient means of accessing the market. 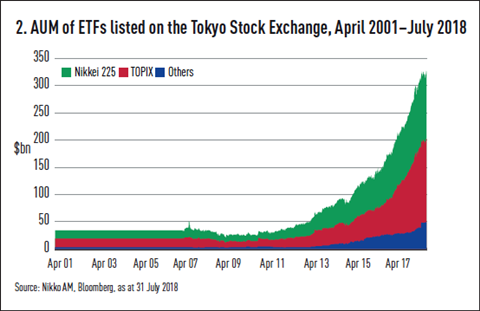 Liquidity in the ETF market is made up of onscreen and OTC trading. The major players in onscreen trading include individuals and offshore investors. Most domestic institutions will primarily trade OTC.

Some 85% of the total assets on the Tokyo Stock Exchange are ETFs with TOPIX and Nikkei 225 as the underlying indices. The Nikkei 225 has traditionally been more retail focused and the index itself is geared toward mid/large cap stocks. In contrast, the TOPIX index has more of an institutional following and is a much broader market index with a very large amount of constituents. Indices such as the MSCI Japan tend to be more popular amongst European investors.

It is worth mentioning that, while the MSCI Japan is highly correlated with the TOPIX, its index has less small-cap exposure and can therefore be seen as less representative of the broader Japanese market.

There is currently growing development into other areas of the ETF market. For example, the emergence of high-yielding products such as REIT ETFs and ETFs weighted toward higher dividend-paying stocks have seen rising demand in the current market environment. In addition, there are a variety of smart beta products emerging.

The JPX-Nikkei 400 index is a strategic beta index that was introduced in 2014. The index combines quantitative and qualitative factors onto a wide universe of companies screened for quality and liquidity. It provides exposure to Japanese companies with efficient capital management policies, managed in an investor-orientated manner. The idea of the index is to hold the most shareholder-friendly companies. To some in Japan it is known as the ‘shame index’. Its nickname has gained traction as companies not included during constituent reviews or those that are removed from the index receive a lot of public pressure to improve for example from the media.

Japanese-domiciled ETFs have been popular for a number of reasons. Putting aside the fact they have high trading volumes and are highly liquid, one of the most significant advantages of being locally domiciled is the fact that the ETF trades when the underlying market is open. As you can see from figure 4, market open hours between western and eastern markets rarely cross over and this creates a lack of price transparency and liquidity for non-Japan-domiciled products.

Prices of western-domiciled ETFs such as those listed on the New York and London Stock Exchanges deviate much further from their i-NAVs, demonstrating the benefits of underlying market liquidity and trading while the market is open. Thus, a locally domiciled ETF leads to enhanced tracking and decreases any tracking error through price discovery mechanisms.

While there are many passive options to access the Japanese stock market, western ETFs such as UCITS tend to be more expensive with wider spreads while Japanese-domiciled ETFs can offer tax advantages for tax-exempt investors over some non-Japan domiciled equivalents.1

1 Tax treatment is different according to the ETF’s domicile and the investors tax jurisdiction. This constitutes general tax information. The information given does not constitute tax or legal advice. Prospective investors should consult with their own professional advisers as to the tax implications under the laws of the jurisdiction in which they may be subject to tax.