Mary Robinson, the former Irish president and United Nations High Commissioner for Human Rights, gave a keynote address at IPE’s 2017 Conference. Afterwards she talked in more detail to Daniel Ben-Ami about how she sees the world. This is an edited version of the interview

IPE: Your home country of Ireland seems to have changed hugely over the past half century. For example, I was surprised to read that in the mid-1960s you personally had to get permission from the Catholic church to attend Trinity College.

MR: Yes, the Catholic Archbishop didn’t want prominent Catholic families going to Trinity College Dublin which was historically a Protestant university. My parents were both doctors in the west of Ireland so it was quite easy for us to get permission. It was a matter of having a sherry with the archbishop.

A few years later when, as a senator, I proposed a measure legalising family planning, the same archbishop wrote a letter to every parish in Dublin requiring it to be read out at mass the following Sunday. It said the initiative would be a curse upon the country.

IPE: So you were brought up in a highly conservative and traditional country.

MR: Yes, contraception and homosexuality were both illegal.

IPE: How do you see the more recent changes?

MR: I’ve never been prouder of my country than during the successful 2015 referendum on same-sex marriage. Many young people returned to Ireland at their own expense to vote in favour.

IPE: Would you describe yourself as a feminist?

MR: I was more hesitant to do it when I was a young lawyer because I didn’t want to be bracketed narrowly.  I was taking a lot of cases on equal pay issues and family planning. I’m now quite happy to describe myself as a feminist and I have been for years. 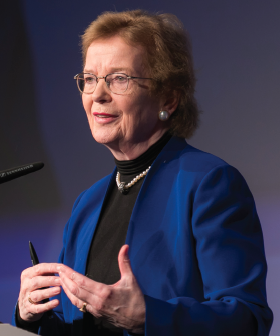 IPE: How would you relate to what is sometimes called ‘hashtag feminism’ and the #MeToo campaign?

MR: I slightly worry about the #MeToo campaign because it’s becoming a bit oppressive. I like people to express a physical affection. I like to be able to hug a man or have a man hug me.

I am against inappropriate behaviour but women should be able to cope with slight things without it becoming too much of an issue. At the moment there is a danger it will become a constraint on natural behaviour.

At the beginning in particular and in its essence the campaign was good because it helped women to have the courage to complain. And there are lots of real complaints.

IPE: But doesn’t it muddle serious assaults with clumsy behaviour? For example, the well-known case in the UK of a politician who put his hand on a journalist’s knee but then removed it once she objected.

MR: It was necessary to have a way of breaking the silence because far too many men were abusing their power in many different ways.

IPE: Let’s move on to the Sustainable Development Goals. Many people refer to them but in practice aren’t they unwieldy?

MR: They give countries a way of measuring what they should be doing. That’s the objective. That capacity to measure became important to encourage accountability. Otherwise the goals become aspirations that don’t make any difference.

IPE: Some people would argue the best thing to do in relation to climate change is to promote economic development. The richer countries are the more resilient they are likely to be.

MR: That’s true but we have to think about what kind of economic development. The best development is the type the rich countries haven’t gone through, which is to develop without emissions.

IPE: It’s easy to say but harder to do.

MR: That’s the point. That is what has to happen. That’s the ambition of many developing countries including the poorest.

If only the world were sensible we would have pension funds and others investing hugely in that. With solidarity and self-interest. Because if you open a coal plant that is a 30 to 40-year investment. We absolutely cannot afford that.

Developed countries are still selling coal in a shameful way instead of cutting their own use completely and going solar. That’s the shift we need. We need the industrialised countries to be far quicker – including my own country.

IPE: As a passionate supporter of the EU why were you so critical of the UK’s Remain campaign?

MR: Because they said nothing about what Europe should really stand for. That is historic enemies coming to a peaceful future based on having that sense that we are stronger together, that richer regions help poorer regions and so on. In particular the commitment to a shared future; because that is the way to a sustained peace.

It was a tactical mistake to frighten and threaten people with economic disaster if they didn’t vote Remain. That’s not a convincing way to get people to think.

IPE: Isn’t there a widespread view that nations are being interfered with by outside powers?

MR: That’s the fear of globalisation. It’s the fear of being left behind. If you look at Brexit, the European countries and the US it’s what you see.

I don’t want to be misunderstood but there is a sort of white entitlement fear because a lot of the rest of the world is making progress and things are getting better. But those for whom it’s not getting better felt they were middle class and entitled but now their children are going to be poorer than they were. They resent the globalising trends that have brought this about. It’s clear that they are angry and that anger has expressed itself in electoral terms.

There is a lot of truth in their position. That’s why we need the just transition I was talking about. But there is a white entitlement component to it that means there is also an anti-migrant aspect. If you say that in public you can be misunderstood but I think it’s true. That’s the main cause of the current mood.