Mexico has been a subject of news headlines almost as often as Donald Trump has since the New York developer’s surprise election to the US presidency last November. In fact, Mexico and the US are frequently mentioned in the same stories – a conjunction that has taken the Mexican currency and bond markets on a volatile ride that may well continue into 2018.

Trump’s confrontational stance on immigration from Mexico and harsh criticism of trade terms with America’s southern neighbour sent the Mexican peso into a tailspin. The sharp words forced the Mexican central bank, the Banco de México (Banxico), to raise interest rates to shore up the currency and stave off potential inflation. The decline set the stage for a strong rally in the early part of 2017 when Trump moderated his rhetoric; the peso rose 8% in the first quarter, carrying local-currency bonds in its wake. But the rally also closed the discount at which the peso and peso bonds had traded, limiting the potential for further appreciation.

“Mexican local peso assets came into this year with the Mexican peso at extremely cheap and undervalued levels,” says Koon Chow, macro and foreign exchange strategist, EM fixed income asset management at UBP in London. “Because of this, we’ve had the significant appreciation of the Mexican peso, as global investors have decided to allocate more into Mexican peso bonds,” he adds. “It was a very, very favourable trade to be long Mexican local assets.” 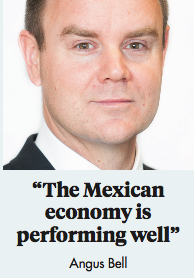 But because they have done so well, Chow says, “it’s going to be quite difficult for Mexican assets to distinguish themselves” going forward. “A lot of the juice, as they say, has been extracted.”

While opportunities remain in Mexican fixed-income, the investing window is narrowing at a time when significant downside risks are coming into focus. Forming an investment outlook on Mexican debt is a multi-step process. For investors the key is to evaluate the outlook for each of three principal assets – the peso, Mexican dollar-denominated bonds, and Mexican local-currency debt – then blend the relative merits of each to arrive at a capital allocation decision that reflects the risk-reward profile of each asset relative to the country’s economic and political situation, global factors, and investment alternatives.

The peso weakened to a low of 22 to the dollar in January, from 18.3 on election day, then rebounded almost 17% to a post-election high of 18.4 in mid-April. Bond yields rose from a range a of 5.8% to 6.4% that had prevailed for most of the year prior to the election, reaching a high of 7.8% in January before settling back to about 7.1% in May with 10-year spreads over Treasuries settling at around 130bps by May, down from nearly 200bps after the election (see figure).

Now that the relative undervaluation of the peso has largely been closed, it’s a time to allocate capital carefully, investors say. “There are several components to what is going on in Mexico,” says Pablo Cisilino, portfolio manager at Stone Harbor Investment Partners in New York City.  “The bottom line is we still think the Mexican peso has value.” 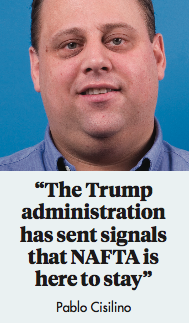 In late April, Stone Harbor ranked Mexico’ fixed income markets as the second-most attractive among the emerging-markets. Portfolios managed by the firm were overweight the Mexican peso, overweight duration, and overweight credit, with the majority of the credit exposure in dollar-denominated issues of Mexican corporations. “We expect some appreciation of the peso, and that interest rates will come down as well,” says Cisilino. “That’s the base case,” he adds. As of April, Stone Harbor also assigned the widest range of potential outcomes to the Mexican bond markets. “Obviously there is a very volatile market right now, and that’s something we have to live with,” he says.

The main source of instability is the potential for Trump Administration trade policies to dent Mexican GDP growth. In late April, Trump appeared to back away from his threat to unilaterally withdraw from the North American Free Trade Agreement (NAFTA) after phone calls with Mexican president Enrique Pena Nieto and Canadian prime minister Justin Trudeau. “It feels to us that the administration has sent signals that NAFTA is here to stay,” says Cisilino.

The tone of US administration rhetoric has moderated since peaking in January, says Angus Bell, senior portfolio manager, emerging market debt at Goldman Sachs Asset Management (GSAM) in London. That has calmed markets, “in conjunction with what we think has been the introduction of competent and prudent policy from, particularly, the Mexican central bank”.

While there are lingering concerns about the future of Mexico’s GDP, the country reported a 2.7% year-over-year GDP increase for the first quarter of 2017, prompting many economists to raise their annual target for Mexican GDP to 2% from 1.5%. “The underlying economy in Mexico is actually performing along reasonably well so it doesn’t look like it’s been significantly impacted as yet regarding what’s happening north of the border,” Bell says.

Banxico is being “very proactive,” Bell says. “We think they handled the situation quite well.” The bank hiked its policy rate six times in approximately the past year, from 3.75% to 6.5%, and introduced a policy of using foreign exchange swaps to have greater flexibility in its currency management operations, he says. “They’ve implemented policy at the optimal time.”

Inflation ticked higher as the peso tumbled, prompting the central bank to raise rates. As of late April the market was pricing in another 40 basis points of rate hikes by the central bank through the third quarter of 2017, with some probability the central bank will commence reducing rates during the fourth quarter, Bell says. Investors were also pricing in some additional risk premium in the longer end of the yield curve for local-market bonds. In April, GSAM held a view that was more moderate than the consensus regarding any reversal in rates, arguing that rates would have to remain higher at the front end of the curve for longer than the market was assuming. “We think it won’t happen as quickly as the market had anticipated, given our view on the inflation profile,” Bell says.

Inflation has accelerated from 2.6% a year ago to 5.4%, ahead of Banxico’s 3% target, “so we’re pretty off track”, says Chow. “It would be prudent to wait until inflation got closer to the target to start cutting rates.”

That presents bond investors with a conundrum. “At these levels we don’t see a tremendous amount of value with owning Mexican dollar-denominated debt,” says Bell. Current lower yield levels reflect that the greatest potential shock facing the Mexican economy from changes in US policy is a widening current account deficit. “The adjustment mechanism for that is more likely to take place on the currency and the local rate side rather than the dollar-debt market,” Bell says. That said, “we still like being overweight the peso”, Bell says. “And we still think there’s some value in the long end, so we like the longer-dated bonds on the local curve.”

Bond investors face other looming risks. One is the 2018 Mexican presidential election. None of the three candidates is polling above 20% approval. “It seems to be very divided,” says Cisilino, “but it’s too early to focus on that in our view.” The main risk to Mexican bonds in the next six to 12 months, he adds, is that the NAFTA renegotiations result in an adverse outcome for Mexico.

UBP’s Chow says NAFTA talks promise little upside for Mexican bond investors. “How can talks with the US over NAFTA be positive for Mexico?” he says. “It’s already the best setting for trade relations, so any discussion on changing that better arrangement means you’re going to ‘less best.’”

Given that any new arrangement is likely to be less favorable than the current treaty, “the thing that we’re spending our time trying to assess is whether or not the risk of that is appropriately embedded in the price,” says Bell. Even after rallying above 18 to the dollar in 2017, Bell says “the peso still appears fundamentally cheap to us, given the still low unit labour costs”.