German reinsurance company Munich Re has introduced a new pension plan “similar to a defined ambition” scheme, according to its head of pensions.

The new plan “increases flexibility and the chances of higher returns on the capital markets”, Vogt said.

The company’s board had decided to introduce an “index-based occupational pension solution” last year in a bid to reduce the pension liability risk. At the end of 2018 Munich Re reported almost €6bn of defined benefit obligations in its annual report, partially offset by €3.3bn in plan assets.

Vogt emphasised that occupational pension provision still was important for Munich Re – it set up Germany’s first company pension scheme in 1891.

“But the board decided that not all the risks had to be hedged as full guarantees cost too much money,” he said. 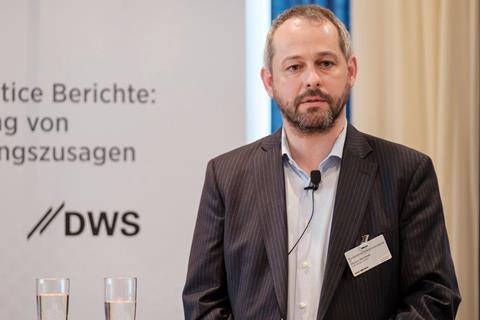 Markus Bechtoldt, managing director at H2B Aktuare, was the consultant on the pension plan makeover.

“We set up a plan similar to a defined ambition solution in which 90% of the contributions made are guaranteed,” Bechtoldt explained.

An increase to 95% was considered but “that would have increased costs considerably”, Bechtoldt said, while lowering the guarantee to 85% “would not have saved a lot of money”.

The pension can be paid out as a lump-sum or in instalments. Monthly pension payouts are offered as an option for those retiring no earlier than the statutory retirement age.

At the conference in Berlin, Carsten Velten, head of pensions at Telekom, who moderated the panel, warned that a 90% guarantee could be challenged in court, as up until now all German occupational pension plans have had to guarantee at least the contribution level.

This can only change once employer and employee representatives within a major company or an industry agree on a new pension plan under the Betriebsrentenstärkungsgesetz (BRSG) legislation. In these plans guarantees are forbidden.

However, Munich Re said it was convinced its pension provision would hold up in court as the legal framework allowed for costs to be deducted from the guarantees.

The company has offered various risk portfolios for employees to choose from, which are also set up as a lifecycle solution with asset allocations changing with age.

Every three years gains from the investment returns are locked-in and the 90% guarantee is extended to these gains. This lock-in is not applied if the asset value has fallen below the last guaranteed sum over the previous three years.

“This safety net makes it attractive for employees in all situations of life,” Vogt said.

The assets are invested in equities “oriented at the MSCI World index” as well as four “alternative risk premiums” based on carry and momentum, according to the reinsurer.

“It is a completely rule-based investment strategy,” added Bechtoldt.

To minimise its hedging costs, Munich Re has combined the new pension plan with index-based reinsurance.