6
Natural Capital: Back to the land

Natural Capital: Back to the land

• Governments and utilities see the value in funding alternate land use to limit the impact of intensive agriculture
• There have been limited commercial investment opportunities in this area so far
• Benefits can include flood protection, groundwater protection or higher pollination rates, as well as avoiding regulatory penalties for pollution

When United Utilities, a UK company, paid farmers £20,000 (€23,000) in 2017 to grow different crops, such as oats and oil radish, it improved local natural assets and reduced its own costs by avoiding water treatment. The farmland in Cheshire is located above important water storage aquifers (layers of permeable rock), and the crops take up nitrates remaining in the soil after the summer harvest. This prevents the nitrates from leaching into the groundwater. The crops also cut fertiliser costs, reduce pesticide use, improve yields by enhancing soil health, prevent soil erosion and conserve soil moisture.

Alternative land use with this objective, satisfying both business and ecologists, is emerging owing to negative environmental impacts from intensified agriculture. Such natural capital solutions reduce harm to essential ecosystems, so there are compelling arguments for allocating government authorities or a closely regulated utility the responsibility to run and pay for them. Hence, the private sector has hardly been involved thus far. “Hundreds of investments of this type are paid for by companies themselves. They could encourage investors to put money in and pay them through avoided costs, but there’s a concern financial returns might not be high enough or risks too high,” comments Ece Ozdemiroglu, founding director of environmental economics consultancy Eftec.

However, many of these organisations are experiencing funding constraints coinciding with escalating concerns, like soil degradation and flood management. Thus more private sector innovation is becoming apparent in the US, for example “Natural capital is very much in the process of market-building. There’s a need to demonstrate that capital flows can be there. What generates them is often policy and regulation-enabled infrastructure that needs to exist,” says Catherine Godschalk, vice president of investments at Calvert Capital, which is involved in a project in Washington DC, US (see panel).

That factor is an obstruction to many potential projects. Where the capital source does exist, it takes the form of funds accumulated due to corporate penalties, as in the DC Water project. Such projects are the most likely initial subjects of experiments in natural capital, producing revenue that becomes available due to avoided public expenditure. However, some initiatives are investigating the generation of original sources of capital.

One of these is being trialled in a social impact project to construct a mountain bike trail in an economically depressed area of Ohio  in the US. “By running one loop of the bike trail through the area, you benefit the local economy, hotels and other businesses. You can create an economic model around that loop through those beneficiaries. Investors pay upfront for the mountain trail, and you create a local consortium for payouts, but it’s not easy,” says Eric Letsinger, chief executive of impact investing firm Quantified Ventures. Among the obvious concerns are the complexity, patience required and risks of working with and convincing multiple local parties.

The same concept applies to environmental impact investing through the formation of local partnerships of beneficiaries to improvements like higher pollination rates or retained wildlife habitats. Tourism businesses or horticultural companies are obvious candidates. In England and Wales, catchment partnerships are building this approach. These collaborative non-profit, private and public sector partnerships work at river catchment scale to deliver improvements to water environments and are considering bundling investment. So far, financial asset owners have not taken part, however. “It’s an obvious mechanism where investors could get involved,” says Ozdemiroglu.

Private investment also needs to overcome another barrier – unknowns in ecosystem activity that create further risk, make revenue and outcomes harder to estimate, and complicate the creation of benchmarks and standards. Plotting the course of water, for instance, is an area of uncertainty. “Models show the hydrology of a catchment. But it’s not always possible to predict whether the water will move in a particular direction or at what speed,” says Ozdemiroglu.

Economic assessors face other enigmas. For example, it is not always clear how species might respond to land use change, which affects assumptions on biodiversity gains or losses. Similarly, an ecosystem established around one development may not be identical in another. “There are uncertainties in terms of generating numbers for the whole country, so scaling up is one problem. There is currently a mismatch between the scale used by portfolio managers and natural capital investment,” says Ozdemiroglu.

Despite these barriers, some new financial models are emerging. For instance, Swiss Re in March announced a new insurance policy to conserve and restore the Mesoamerican Reef in Mexico. Instead of paying extra government taxes, hotel owners pay premiums into the insurance fund to protect the coral reef. The fund also pays out after hurricane damage.

In addition, examples of effective collaboration on natural capital management already exist, providing useful models – as in a farming programme in the Catskill Mountains, New York state. After water quality had deteriorated due to intense agriculture, and in the face of regulatory threats, a group of Catskill farmers cooperated in the 1990s to reduce the pollution from their individual farms. This saved considerable sums of money as well as avoiding the need to build water treatment facilities.

Many natural capital projects would be long-term ventures, not generating cash flows for several years – a discouraging factor. However, some of the objections due to risks may be overstated because of lack of familiarity. Once prototypes are developed to manage particular problems, natural capital projects may work no differently from early-stage technology development. However, they too will need long-term government support. 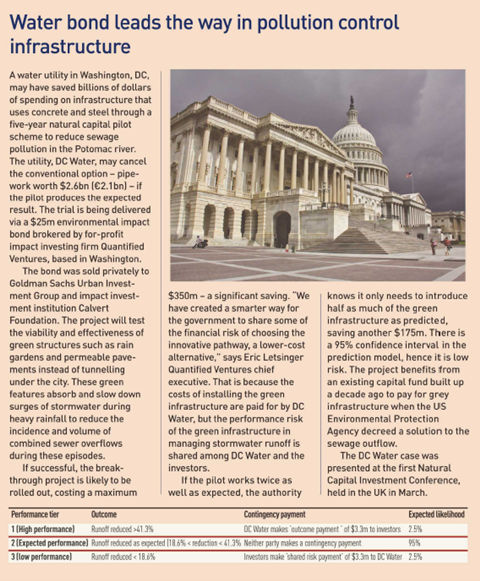