Amundi is to manage a real estate debt allocation while BlackRock has been tasked with infrastructure debt management.

The £8bn (€9bn) multi-employer scheme is to allocate up to 5% of its default funds to the mandates, which will mean at least £500m of inflows for the new strategies in the first 12 months of operation, according to NEST CIO Mark Fawcett.

At a media event yesterday, Fawcett said NEST had spent several months working with Amundi and BlackRock to establish an appropriate structure for managing illiquid assets in the DC fund.

“Private markets hasn’t really happened for DC schemes to date,” he said. “We’ve been working hard to create a structure where we can invest in illiquid assets. We believe there is an illiquidity premium – this has come down, but if you have the right managers we believe there are additional returns that can be achieved.”

The two strategies will be housed in fund structures and will be available to other schemes at each manager’s discretion. However, Fawcett said private debt would not be offered to members as a separate fund choice.

Fawcett highlighted Amundi’s credentials in sustainable property and focus on the transition to a low-carbon economy. For infrastructure, he cited the attraction of “helping to finance renewables and lend to social housing projects”.

NEST said Amundi and BlackRock were selected for their “innovation and cost efficiency”, setting them apart from “nearly 40” organisations that bid for the mandates. 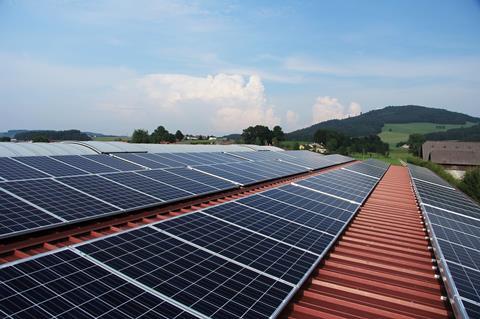 “We believe alternative assets are no longer a nice-to-have but a need-to-have in a portfolio,” Cave said. “Given their low correlation to equities and bonds, coupled with the benefit of providing diversification in a portfolio, alternatives can provide further protection against key risks such as rising inflation.”

He added: “NEST is an organisation pivotal to the growth and success of the UK DC market and we are excited to partner with them by providing their members access to this important asset class.

“As NEST continues to lead the charge in bringing innovative investment solutions to members, we look forward to continuing to work with them on this mandate and on the evolution of their investment offering built for a new generation of DC savers.”

NEST would manage the cashflows in and out of the funds, Fawcett said, holding regular discussions with each manager to understand deal flow and cash requirements for new purchases.

“Because we are so cash flow positive, the challenge is often to put money into the markets [promptly],” he said.

Private markets have been a difficult area for UK DC schemes to access due to a regulatory requirement for daily liquidity. However, with NEST’s positive cashflows, the scheme said it was less likely to be affected by liquidity concerns. 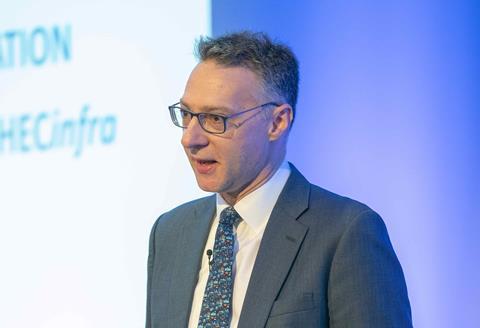 Mark Fawcett of NEST, speaking at the EDHECinfra Days 2018 conference

Fawcett said NEST would request regular valuations – monthly or quarterly depending on the assets – with more regular updates expected during periods of stress in the markets.

NEST head of private markets Stephen O’Neill added: “We’re long-term investors – our youngest member is just 16 and she could be investing with us for more than 50 years. She’s the perfect person to be entering into private markets. We can be patient with her investments so she’ll benefit from the illiquidity premium you get with these types of loans.

“We’ll be careful to manage our exposure to illiquids so that while they’ll play an important role in our portfolio, it won’t be a dominant one. Our positive cashflows will ensure members retain the ability to move their savings around.”

The pension scheme has been building up an allocation to short-dated corporate bonds in anticipation of using some of this to seed the two new mandates in October.

Fawcett also hinted that the allocation to private debt could increase. As NEST’s total assets increased – the CIO said he expected assets under management to hit £13bn next year – the cashflows to the new mandates could exceed £500m, he said.

However, he emphasised that “we don’t want to force the money on managers or force them to invest” through allocating too much. Investing 5% of NEST’s default funds over 12 months was “a reasonable target”, Fawcett added.

“Arguably over time we might be able to have more [in private debt],” the CIO said. “If you look at Australian super funds, they have 30-40% in illiquid assets. I’m not saying that’s where we’re going but we certainly have the capacity to go further.”

Fawcett also said NEST could appoint a loans manager, although this was more complex than real estate debt or infrastructure debt.

Infrastructure managers told to ‘raise game’ or miss out on DC pensions
Speaking at an infrastructure conference last year, NEST’s Mark Fawcett told fund managers to raise their game if they wanted to win business from the UK’s growing DC sector.