Liability Management: The end of LDI as we know it?

Interest rate swaps have for long been a fixture within the liability-driven investment (LDI) portfolios of Dutch pension funds as they take into account changing regulation and the FTK assessment criteria for liabilities, as well as overall market conditions in interest rates and on the portfolio side. Interest rate swaps remain an integral component of liability management.

BMO Global Asset Management has fairly modest forecasts for swap-rate movements; its expectation is that long-term (30-year) swap rates will stay within a range of 1.25% to 1.75% (as of mid-June the rate was about 1.50%).

Jan Willemsen, LDI client portfolio manager at BMO Global Asset Management, says: “It is true that monetary policy is gradually becoming less accommodative, but given that the growth outlook is only mildly positive and with inflation remaining low, the scope for rate rises at the short end of the curve is limited. With the swap curve already being very steep, in our view that also limits scope for rising long-term rates.”

As the FTK framework of the Dutch regulator (DNB) requires pension funds to value their liabilities using swap rates, the spread between government bonds and swaps is an important factor in their investment policy.

So if the yield on long-term government bonds decreases faster than the swap rate, the value of the matching portfolio will increase (slightly) faster than liabilities, which is a positive for pension fund solvency ratios. But if the spread between long-term government bond yields and swaps increases when yields are rising as they did from the beginning of 2017, this has a negative effect on solvency ratios.

According to Edward Krijgsman, principal at Mercer Investments, the bulk of Dutch pension fund exposure to long-term government bonds is to 20 or 30-year maturities. In 2016, he notes, there was a sharp drop in the spread between German government bond yields and the swap rate. This has widened since (figure). 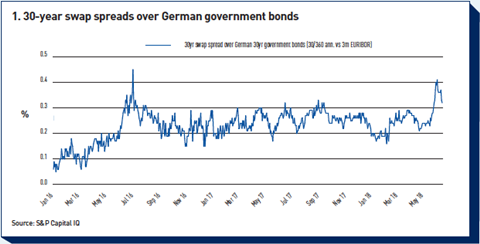 “Some pension funds anticipated swap spreads would then revert to more normal levels, so they sold long-term government bonds, but they needed to keep their interest rate hedge at the same level,” he says.

Krijgsman adds that while only a few pension funds did that, recent developments have given the others a second bite at the cherry. “The volatility in the euro-zone and the political crisis in Italy mean that spreads have dropped again,” he says. “So those pension funds that did not take the opportunity to lock in the positive development in government bonds in 2016 have another chance to do so now.” 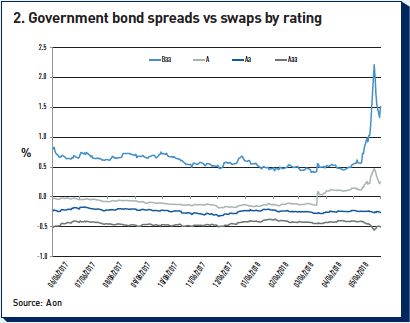 “The graph clearly shows that A and Baa government bonds have decreased in value versus swaps over the past two months to June 2018, mainly because of the developments in Italy and Spain,” says Maarten Thomassen, investment and ALM manager at Aon. “However, the development in Aaa and Aa government spreads versus swaps is much more muted.”

Because of their poor performance, yields of A and Baa government bonds versus swaps now look more attractive, says Thomassen. But he adds that the cost of holding peripheral bonds is high in the Dutch regulatory framework.

Thomassen also points out that the Italian bond crisis has put the focus back on the embedded risks in peripheral government bonds: “Along with economic risk, they carry a high risk budget in the methodology of the regulator, so Dutch pension funds with a funding level below the required minimum will need to be very convinced about their return potential, to incorporate them in a meaningful way in portfolios.”

And he adds: “We meet relatively few pension funds with matching portfolios where peripheral risks have not been downsized in previous years.”

“Monetary policy is gradually becoming less accommodative, but given that the growth outlook is only mildly positive and with inflation remaining low, the scope for rate rises at the short end of the curve is limited”

A further consideration is the ECB’s planned tapering – and eventually ending – of quantitative easing. “Pension funds with no desire to manage this development actively may choose to decrease their exposure to government bonds in favour of swaps, if they are comfortable with derivatives and able to access this market efficiently,” Thomassen says. “This is a development which we have seen happening with our clients for some time now. However, recent market developments have a limited influence on this decision, as this is more a strategic decision.”

Also speaking before the ECB’s June announcement on tapering, Maarten Bonekamp, senior adviser for pensions and insurance at Ortec Finance, said: “Most pension funds are taking tapering into account for their LDI policies, but are not yet factoring in the political unrest in Italy, although they are discussing it. Most Dutch funds only have a minor exposure to Italian government bonds since the previous euro crisis.”

So what are Dutch pension funds doing in practice with their interest rate hedges? Willemsen says: “We are seeing Dutch pension schemes currently increasing their hedge ratios. This trend started in 2017 as a result of pension funds renewing their – mostly three-yearly – asset-liability modelling (ALM) study.”

He continues: “The new ALMs start at much improved solvency levels, and use much more modest interest rate forecasts in comparison with three years ago, as pension funds realise that their, sometimes overly, optimistic rate outlook has not materialised, or only modestly. This year, an even higher proportion of pension funds will renew their ALM, most likely resulting in increased hedging activity.”

Ortec’s Bonekamp says: “We see pension funds with better coverage ratios considering whether the recent increase in coverage ratios should lead to their reducing their balance sheet risk.” But, as a whole, Ortec sees the trade-off between government bonds and swaps caused by spread differences predominantly as an implementation issue that has not affected the strategic hedge levels of interest rate risk by pension funds.

Harry Horlings, director, institutional business development within the institutional clients Netherlands team at NN Investment Parters (NNIP), says several pension funds have replaced their shorter maturity government bonds with cash. Some of them, he says, have completely removed German government bonds from their portfolio, or have a dynamic strategy linked to the swap spread.

He observes: “Many pension funds also incorporate investment-grade credit in their matching portfolio. The unattractive spread of core government bonds compared with swaps has led to increased allocations to investment-grade credits and alternative credits such as mortgages. These allocations also provide an extra opportunity to respond to increased environmental, social and governance (ESG) demands.”

According to NNIP’s Horlings, a practical consequence of this is the need for cash in LDI portfolios. “Derivatives counterparties prefer cash as collateral for derivatives because of Basel III, and the preparation for central clearing has also created an additional demand for cash,” he says.

“In addition, we also see a transformation of risk from country risk into liquidity and derivative-type risks. Pension funds need to ensure that they are in control, so some clients specifically choose to use long-term bonds where possible, and swaps only when necessary.”

Mercer’s Krijgsman says: “The average interest rate hedge is now equal to approximately 40% of liabilities, according to figures published by the Dutch regulator.”

And he says there is a now a large dispersion between pension funds, with interest rate hedges varying from 10% to 80% of liabilities. “They are expecting that the swap and yield curves will normalise at a higher level. If that happens, it will have a positive effect on the solvency ratio,” Krijgsman says.

On the other hand, the many Dutch pension funds still in recovery are not permitted to increase the risk within their strategic policy in relation to their liabilities.

“It is more difficult for those funds to make a decision now to reduce their interest rate hedge, because that would force them to take risk off the table elsewhere in the portfolio,” says Krijgsman. “If the total risk is to remain the same, then if they increase their interest rate risk they are forced to reduce other risks such as equity, real estate or currency risk.

“So although almost everybody says yields are historically low, and in the future interest rates will probably have to be raised, it does not necessarily mean all pension funds are in a position to reduce their interest rate hedge.”

But regulatory reforms also include EU reforms. BMO Global Asset Management is involved in the ECB working group on euro risk-free rates. It has also started using a European-based clearing house, while steering euro-clients away from the London-based market leader LCH. The firm says Brexit, as well as better pricing and lower initial margin requirements, are behind this move.

Willemsen says: “By 1 January 2020, the new risk-free rate will be applied, and the EONIA – and possibly also EURIBOR – will cease to exist. This will have consequences for the swaps market, and will possibly affect the liability discount rate for Dutch pension funds.”

Liability Management: The end of LDI as we know it?