Active Management: The best of both worlds?

6
Neuroscience: The revenge of the ‘gut feeling’

Neuroscience: The revenge of the ‘gut feeling’

The problem of benchmark hugging suggests that active managers are suffering a severe identity crisis. This is perhaps to be expected given the harsh criticism they have long suffered. Proponents of the efficient-market hypothesis have argued for decades that the average manager cannot beat the market. Recently, behavioural economists have claimed cognitive biases make humans bad risk takers. But new evidence from neuroscience studies may support active managers after all.

Research led by John Coates, a former derivatives trader turned neuroscientist, claims to show that humans are, indeed, good risk takers. Coates says he has found evidence that suggests a person’s physical preparation for risk is a highly accurate assessment of risk-reward and that it may not be subject to the biases highlighted by behavioural finance. Under normal conditions of physiological arousal, traders who are sensitive to signals from their bodies are able to maximise risk and return. But in chronically stressed traders, who may be experiencing extreme market conditions, risk judgement can become impaired. These stress dynamics contribute strongly to market bubbles and crashes, according to Coates. But the basic idea is that when traders can tap into their physical preparation for risk taking – their gut feelings – they can beat trading algorithms.

Coates ran derivatives trading desks on Wall Street for Goldman Sachs and Deutsche Bank for more than a decade, before retraining in neuroscience and applied physiology. He then started running experiments in what used to be his work environment. Over the past decade, he has conducted studies with several real-life trading desks. “We wired traders up, head to foot, 24-hours-a-day and weeks at a time, and then correlated high-frequency physiology data with their profit & loss accounts and value-at-risk data. We got some eye-popping results that told us that the state of their physiology is probably the largest determinant of returns,” says Coates.

In one experiment, Coates found a striking correlation between levels of cortisol (a hormone released in response to stress), and the volatility of Bund prices over a two-week period. Humans, argues Coates, do not process market information dispassionately, as a computer does; we react to it physically. And our physical preparation is an accurate measure of opportunity and threat.

“Humans are cutting edge robots, not second rate computers. The human brain is an incredibly powerful system that controls extremely complex movement. It feeds on information to produce movement,” says Coates. In this sense, a trader can be compared to an alert animal acting in response to an environment. The stress response, which is basically nothing more than the metabolic preparation for movement, is therefore an essential component of action.

Coates goes on to argue, with the backing of his published scientific results, that traders make the best risk-taking decisions at optimal levels of stress.

But the biggest insight from his research is that traders’ risk appetite changes with their bodies. When stress levels are high, for instance after a market bubble has burst, traders become more risk averse. Conversely, during bull markets when rising testosterone among young male traders leads to greater risk seeking. This would explain why reckless or overly defensive behaviour emerges.

Coates says economists have not taken kindly to his studies. “We find it very difficult to get our papers published in economics or finance journals, despite the science being properly done. We propose an original hypothesis, with intriguing implications, and tested it well. Science should be anarchic and disruptive. And it shouldn’t matter who you are or which paradigm you are working with.” The reactions from the medical community, he adds, are far better, and he has published in highly rated science journals, such as the UK’s Royal Society and the National Academy of Sciences in the US. 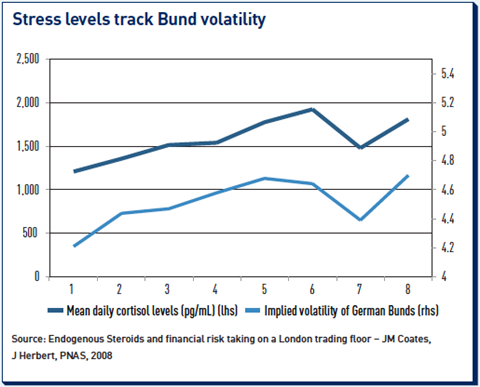 Such reluctance by economists is perhaps not surprising, given Coates’ critical assessment of the foundations of the social science. But Coates does not just criticise the failure of economic theorists to test a fundamental assumption. By turning his attention to physiology and the body, he goes further, criticising economists’ ‘obsession’ with conscious thought and a tenet of Western philosophy that goes back to Plato: the mind-body split.

But Coates is adamant he is not arguing for a kind of biological determinism. “I would never say that rationality does not count for anything. If I had to build a model of the US housing bubble and the credit crisis, it would incorporate classic economic rationality as well as shifting risk preferences. I am not arguing that what we do consciously, by thinking through things, doesn’t have any effect. Everybody behaved very rationally in the run up to the financial crisis. Risk management systems, compensation schemes – all these elements channel individual behaviour. But if you consider shifting risk preferences, the system ends up working in a very different way,” says Coates. Indeed, it is hard to argue against the idea that risk preferences shifted after the financial crisis.

Coates says the results of his research have generated strong interest from asset managers. Firms are rushing to understand the implications for their business models and in many cases are turning new knowledge into practice. 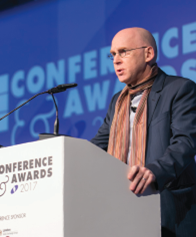 He explains: “We are quite deeply involved with the corporate world, and in the past year or so asset management companies have been really interested, because their business models are under threat.

“We’re getting different sets of questions depending on which department calls us. Chief medical officers, human resource and risk management departments ask us how to improve their programmes based on our results.”

It is the portfolio management desks, however, that show particular enthusiasm, says Coates. “They will be asking how they can make a better investment manager. We will teach them how to use wearable technology that monitors physiological responses, which systems they should be monitoring, how they correlate with performance and how they could engage in interventions, which could be around sleep patterns, nutrition and fitness. These interventions will help traders prepare for better performance.”

Coates says this philosophy applies to long-term investment too.If this approach became more widespread, active management could claim back its original status, according to Coates. “With such low volatility, this is perhaps the most hostile environment for discretionary managers. But volatility will come back, and when it does, humans will be able to show their risk-taking ability. Well-trained humans can perform extremely well against algorithms,” he says.

Active Management: The best of both worlds?