The UK’s largest pension scheme has proposed a new valuation that would put its funding shortfall at around half that under the current disputed valuation.

The £60bn (€67.8bn) Universities Superannuation Scheme (USS) also indicated that, “with sufficient contingent support, the overall contribution rate could potentially be notably lower than that for the 2017 valuation”.

Under a 2018 valuation issued for consultation to employers last week, the scheme would have a deficit of £3.8bn on a technical provisions basis as at the end of March 2018.

The 2017 valuation, which led to a proposal to close the scheme’s defined benefit section and sparked protests on university campuses across the country, put the deficit at £7.5bn as at 31 March 2017.

Under a default cost-sharing process – currently in motion due to a lack of agreement between employers and unions – total contributions would rise to 36.6%.

The reduction of the deficit to £3.8bn under the proposed 2018 valuation would reflect USS implementing four key changes relative to the interrupted 2017 valuation: 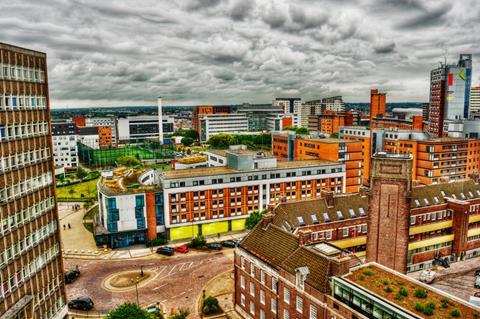 USS said the changes could be incorporated in the 2018 valuation “without significantly increasing the aggregate risk position” – although it noted that the Pensions Regulator (TPR) would probably consider the higher discount rate as an increase in risk.

All of the changes except the higher retirement age were among recommendations made by the joint expert panel set up to review the 2017 valuation.

USS’s board indicated it was willing to consider two additional changes that could further lower contributions:

“For example,” said USS, “increasing reliance to £13bn and maintaining the current level of deficit recovery contribution at 2.1% would result in a contribution requirement of 29.7%.

“However, whether or not that quantum of reduction could be achieved would be very much related to the level of contingent support provided.”

Appropriate support from employers could include “contingent contributions” – effectively a pledge to finance a shortfall subject to certain triggers and limits – and negative pledges, which are commitments not to perform certain acts, such as granting new security over assets, without the prior agreement of trustees.

The statutory deadline to submit 31 March 2018 valuations to the regulator is 30 June. UUK, which represents university employers, has said it would communicate to USS “the consensus position of all participating employers” by 28 February.

The deadline for employer feedback on a consultation to conclude the 2017 valuation is Friday, 11 January.

Once completed, the outcome of the 2018 valuation would result in a new contributions schedule and deficit recovery plan, which would replace those from the 2017 valuation.