Institutional investors have been warned that they could face a 50% to 60% reduction in existing financial assets by 2100 in a 2.7ºC to 3.6ºC world, compared with a 15% loss in a well-below 2ºC transitioned world economy, according to new research from the Thinking Ahead Institute (TAI).

Using a raft of scientific and economic data, the study – Pay now or pay later? – attempts to translate the economic costs and physical impact risks of climate change into effects on financial assets related to the investment industry.

The approach used makes it possible to quantify the relative cost of transitioning the economy at slower or faster rates. It factors in climate tipping points and flaws in existing climate modelling, and shows that risk increases rapidly as temperatures rise.

She continued: “At present, many investments are not accurately priced with regard to climate transition. But the market will eventually price in this change, leading to the marking down of portfolios.”

The research calculated the effects of two climate scenarios.

If action is taken now and temperature increases are kept below 2ºC, it estimated that by the end of the century, this loss in values would be around 15%.

“The downsides of physical risks going beyond a 2ºC rise are that there are many more climate-tipping points, beyond which it is much more difficult, if not impossible, to return to below 2ºC temperatures,” said Martin. “Once we cross a tipping point, there can be a cascading effect, triggering other tipping points. We don’t know where that will lead.”

The paper includes a table showing the impact of a median global average temperature increase of 2.7°C quoted by Climate Action Tracker (CAT). 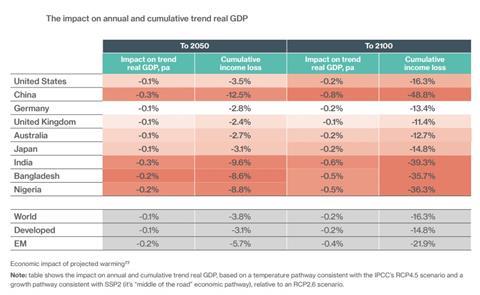 However, the paper said that more vulnerable countries would be disproportionately affected by the temperature rise – for example, India suffering a cumulative income loss of 39.3%, and China 48.8% up to 2100, according to the table.

One objective in publishing the research was to encourage investors to adopt a long-term view for investment.

“We want the investment industry to move capital to those investments which are more positive for the economy transition,” Martin told IPE. “Not acting might appear the cheaper option in the shorter term, but over a horizon that is completely normal for investment funds, inaction is in fact the far more expensive choice.”

The paper includes a list of possible next steps which investors can take now, with links to the related research.

These steps include setting up 3D net zero mandates, which include return and decarbonisation goals, and limits to risk. These can be either “lite” mandates which target decarbonising the portfolio, or “full-on” mandates targeting real-world decarbonisation.

Anne Simpson, global head of sustainability at Franklin Templeton, said: “Investors have one particular common goal – financial returns. The market has been operating without the full suite of information on climate risks, and this has meant we are unable to assume the resulting allocation is optimal.”

“Investors need to focus on transitioning the existing assets under their care, rather than diversifying away from the risk”

Simpson told IPE: “Investors need to focus on transitioning the existing assets under their care, rather than diversifying away from the risk. Climate change is a systemic outcome, so we need to allow the whole economy to transition by making sure emissions-intense sectors can access the capital required to transition to a low carbon future, while delivering the output society needs to prosper.”

And she argued: “To minimise financial losses, supportive policy that provides the right economic incentives is needed. As outlined in [the paper] a carbon tax has the ability to create these economic incentives and force pricing of not only the short-term financial factors but longer-term climate risks and opportunities. In turn, this can direct capital to solutions that can promote the transition and technological innovation to a point that is scaleable and economical.”