Analysis: Stuart Kirk and the ‘fault line in the ESG debate’

ESG investing has been coming under intense scrutiny recently. Last year there was Tariq Fancy’s attack on ESG and greenwashing, for example, and then news broke about investigations of alleged greenwashing by DWS.

Last week the asset manager’s offices in Frankfurt were raided in connection with those investigations. A couple of weeks before, the subsequently suspended global head of responsible investments at HSBC Asset Management delivered a controversial presentation about ‘Why investors need not worry about climate risk’.

Much ink has already been spilled over Stuart Kirk’s presentation, from detailed analysis of the substance of his presentation to bigger picture comments. In the latter vein, for Bob Collie, an independent adviser, the Kirk incident “highlights a fault line in the debate about ESG investing”.

Delivered last month, Kirk’s presentation was peppered with provocative remarks such as that central bankers like Mark Carney were trying to “out hyperbole the next guy” and “who cares if Miami is six metres underwater in 100 years, Amsterdam’s been six metres under way for ages and that’s a really nice place”. (Commentators have subsequently pointed out that Amsterdam is two metres below sea level, not six, and that an extra four would push 80% of the Netherlands below sea level).

Another Kirk comment was: “The debate about what happens out here [20 years in the future] […] from a financial risk perspective, it’s irrelevant. I don’t care.” And in a similar vein, he said that because the average loan length at his bank is six years, “what happens to the planet in year seven is irrelevant”. 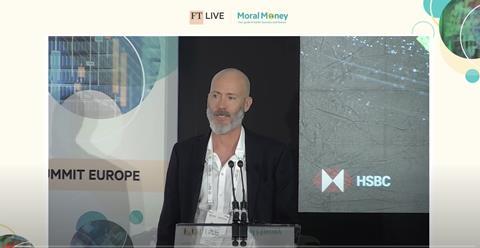 Stuart Kirk presenting at an FT Moral Money conference in May

For Collie, this is a commonly-held view, namely that when issues go beyond the financial, investors do not need to concern themselves with that – their  responsibility begins and ends with the money.

But although “ESG investing begins with a financial impact, it carries us beyond that,” says Collie, who has previously led Russell Investments’ consulting practice and been head of research at WTW’s Thinking Ahead Group.

“Only once this is recognised can a firm begin to develop an effective ESG investing programme. For firms – and indeed for individuals – ESG does not begin to be meaningful until there’s been the “aha” moment where you realise that everything is connected.”

Such a wider view throws up difficult questions, “but until firms address them, they’ll continue to struggle with what ESG investing really means,” says Collie.

“I don’t think we disagree all that much, it’s more a matter of scope,” says Klop, acknowledging that Kirk prefaced his presentation by saying he took “a very financial and investment view” of the topic of climate risk.

“Within the financial system as we currently know it he’s probably right, but it’s hard to deny that the other system, the ecosystem, is going down the tubes”

Points of agreement listed by Klop included that there are always more immediate risks than climate risks that can hit your portfolio, that humanity is quite adaptable and the energy transition is an exciting investment opportunity, and that “this idea of climate risk or ESG in general generates a lot of paperwork, not all of which is of immediate use to our investment practice”.

“The reason I still struggle with the talk he gave is that within the financial system as we currently know it he’s probably right, but it’s hard to deny that the other system, the ecosystem, is going down the tubes,” Klop told IPE. “At PGGM we don’t just look at how climate risk affects our portfolio, we also look at how our portfolio can stabilise the ecosystem.”

He adds: “And that’s where we believe Kirk is missing the point. The way he casually talked about this gave many people the feeling that he doesn’t take the problem seriously, which we disagree with.”

As alluded to above, Kirk was suspended following his presentation, which had been signed off internally. Asked what he thought about the decision to suspend Kirk, PGGM’s Klop said he did not think that was the most mature response.

“Maybe it was the way he delivered the presentation more than what he said. This is just a strictly partial take on the climate risk issue and he acknowledged as much at the very beginning. I don’t think we should sideline anyone for this sort of presentation, and I actually cherish the opportunity to articulate how we scope things, which is that there is more to life than just maintaining or sustaining your portfolio.”

“When you use the results of IPCC models to pick these facts, please be honest and cite the models’ limitations, which the researchers themselves acknowledge in their presentations.”

Others are scathing of Kirk’s presentation and see his suspension as deserved. In an open letter to Kirk, Noël Amenc, associate professor at EDHEC Business School and Frédéric Blanc-Brude, director of the EDHEC Infrastructure Institute, said the investment professional entered the debate “as a high-level representative of a company that, through him, wishes to take its share in serving investors who are concerned about investing responsibly. What could be more normal than suspending him from a function that he does not really wish to perform?”.

In their open letter, they took issue with a lack of “theoretical and empirical consistency” in the executive’s challenge of “both the importance of climate risk and the intentions or competence of those who devote their work to it”.

One of the points they reacted to was Kirk’s criticism of climate stress test models, saying it was unfair on the research being done on next-generation models for estimating the economic and financial consequences of financial risks.

“We share your concern to avoid a catastrophist discourse not supported by facts,” wrote Amenc and Blanc-Brudé. “But when you use the results of IPCC models to pick these facts, please be honest and cite the models‘ limitations, which the researchers themselves acknowledge in their presentations.”

Also: “You may be right or not that climate stress test models are useless. But the conclusion that climate risk does not exist is yet another fallacy. Unknown unknowns are a thing.”

The EDHEC commentators also made points seemingly echoing those of Collie and Klop in writing that today, “institutional investors see their very existence in many jurisdictions as conditioned by their ability to take the non-financial consequences of their investment into account” and that such so-called double materiality considerations are embedded in rules, especially in Europe.

Collie says having a clear sense of purpose helps asset managers as an organisation align behind their desired approach, “defining a shared starting point for investment, operation, sales, client service and communications”.