Recently outlined planned changes to the regulation of UK insurers could have a positive impact on pricing and capacity in the bulk annuity market while maintaining protection of policyholders, although the devil is in the detail.

Reform of the EU Solvency II regime for insurers in the UK has been discussed for some time already, but last month the UK government provided the first real indication of what might be in store for the sector.

In a speech to the annual dinner of the Association of British Insurers, John Glen, economic secretary to the Treasury (HMT), said that the UK, having left the EU, had a “genuine opportunity to maintain and grow an innovative and vibrant insurance sector while protecting policyholders and ensuring the safety and soundness of firms and making it easier for insurance firms to use long-term capital to unlock growth”.

“The Treasury has made excellent progress, in collaboration with the [Prudential Regulation Authority] (PRA), in developing reforms to Solvency II which we are certain will help do all of that.”

In terms of the impact of the reforms, he said he expected there to be a “material capital release … possibly as much as 10% or even 15% of the capital currently held by life insurers”.

Nick Ford, head of risk and capital at Hymans Robertson, told IPE the insurance industry had been expecting a reduction in the risk margin and a potential, small capital release, but this was the first time the government had given any quantitative detail. 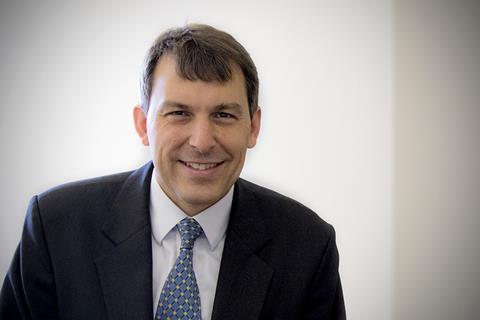 For UK pension schemes, reform of the insurance industry’s solvency regulations matters because it has implications for the bulk annuity market and policyholder protection.

Fifteen years ago, ongoing defined benefit (DB) schemes started to use insurance in the form of bulk annuities – buy-ins and buyouts – and later longevity swaps to reduce the risk for their members.

Today, more than £300bn (€360bn) of DB schemes’ liabilities have been insured, covering some 1.4 million members’ benefits. Over £150bn of insurance has been put in place in just the last three years, with demand for pension risk transfers expected to remain strong in coming years.

Hymans has said it expects half of all the UK’s £2trn private sector DB liabilities to be insured by the end of 2031 and in a similar vein, LCP, another consultancy, is projecting volumes of up to £650bn over the next decade.

Last month Fitch Ratings said UK life insurance stood out as the only life sector in Europe with an improving outlook, largely due to the likelihood of increasing business from pension schemes looking to transfer their risk to insurers.

A boost for capacity, maybe beneficial for pricing

There have been concerns about the capacity of insurers to meet the volume of demand given tough solvency rules, however, and LCP partner Charlie Finch said the proposed insurance regulation reforms in the UK could increase capacity and help more pension schemes to reach their ultimate goal of buyout.

“It will be vitally important that the reforms prioritise policyholder security and ensure the UK insurance regime continues to be a safe, long-term home for peoples’ pensions,” he said. “We believe both objectives can be achieved and look forward to seeing further details of the reforms.”

John Baines, partner at Aon and head of its bulk annuity team, said the reforms outlined by HMT struck a good balance between capital relief and policyholder protection, with the PRA likely to be reassured that the level of capital requirement would still be a “gold standard approach” to ensuring insurers had a high chance of meeting pension benefit obligations.

Neither the Pension Insurance Corporation (PIC) nor Legal & General provided comment to IPE beyond the reactions shared with the press the day after the economic secretary’s speech. At the time, Andrew Kail, CEO of Legal & General Retirement Institutional, said the business was “encouraged” by the government’s announcement.

“It is now key that these reforms are implemented in good time,” he added. “Pension risk transfer is one of the fastest growing sources of UK investment with immense potential for future growth and we want to see that unlocked as soon as possible.”

“Net the reforms have the potential to be positive for pricing, especially the pricing for bigger deals of £5bn or more, where insurers can be quite cautious,” Finch told IPE.

In his opinion, the most promising change from a pricing perspective and capacity perspective would be allowing insurers to invest in a wider set of assets. 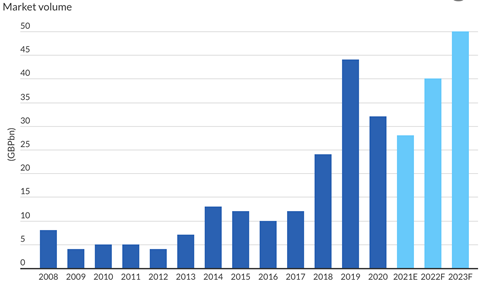 Pension buy-ins/buyouts in the UK

This would include assets with construction phases and callable bonds. When it comes to infrastructure, UK insurers currently tend to invest in mature, debt-like assets rather than riskier early-stage assets.

“The government sees insurers’ investments as a source of supporting growth in the economy,” said Finch. “The proposed changes are clearly beneficial, but we are keen to see them implemented in a way that doesn’t introduce risks for insurers or policyholders.”

PIC has previously said that “appropriate” reform of Solvency II in the UK could unlock “tens of billions of pounds” to invest in social assets in the UK, including renewable energy and social housing.

A reform outlined by Glen that could be unhelpful for bulk annuity pricing, however, according to Finch, is that of changing how credit risk is treated in the matching adjustment.

However, he said it wasn’t clear that the PRA and the Treasury “are in lock-step” on this yet, noting that modelling carried out by insurers for a PRA quantitative impact study last year resulted in a fall in solvency ratios, making capital higher, while last week the Treasury spoke of reductions of capital between 10%-15%.

“Where that comes out is one of the big questions,” said Finch.

The Financial Times last week reported Tracy Blackwell, chief executive officer of PIC, as saying that the “the devil is in that particular detail,” referring to changes to the matching adjustment.

At Hymans Robertson, Ford drew attention to the government’s mentioning plans to introduce a “mobilisation regime for new insurers”.

“There aren’t really any details about what this means, but it could potentially mean there are some relaxed requirements in the first few years of operation for new entrants,” said Ford. “This could really encourage new entrants into the UK insurance market generally and into the pension risk transfer market.”

The next steps are for the government to publish a full consultation document on proposed UK reforms to Solvency II in April. It said this would be followed by more detailed technical consultation by the PRA later in the year.