The Danish government and other political parties in the Nordic country have agreed to form a green fund to help finance the low-carbon transition – and raise the ceiling on contributions to old-age pension (alderspension) plans as a fiscal revenue booster.

The package of measures around the green fund’s formation also include a pledge to change the rules on Alderspension income set-off for certain social benefits – which would mean payouts from that type of pension would not spell lower entitlement to those benefits.

Lobby group Insurance & Pension Denmark (IPD) welcomed the changes and said they were in line with recommendations from the Pension Commission.

The Finance Ministry announced on Friday that the government, the Liberal Party, the Socialist People’s Party, the Radical Left, the Unity List and the Conservative People’s Party, had agreed on a new green fund of DKK53bn (€7.1bn) in all, which it said would accelerate further the country’s green transition between 2024-2040.

Nicolai Wammen, Denmark’s finance minister, said: “With the green fund, we are drawing a thick line under Denmark’s towering ambitions for the climate.”

Denmark has set itself the most ambitious 2030 climate target of the Nordic countries, having pledged to slash emissions by 70% from 1990 levels in eight years’ time.

The new political agreement around the green fund involves DKK1.5bn being earmarked in 2024 for fund from the fiscal room for manoeuvre, or fiscal space, and for DKK3.25bn then to be reserved for the fund annually from 2024-2040.

The ministry said the fund’s financing was being created through an advance in pension taxation by raising the Alderspension’s savings ceiling to DKK8,500 a year from DKK5,500 now, for people with more than five years until state pension age.

According to the pact signed by the parties, raising the Alderspension contribution ceiling is estimated to generate about DKK1.5bn in revenue in 2024, increasing to DKK3.25bn in 2025 before falling to just over DKK2.5bn in 2040. 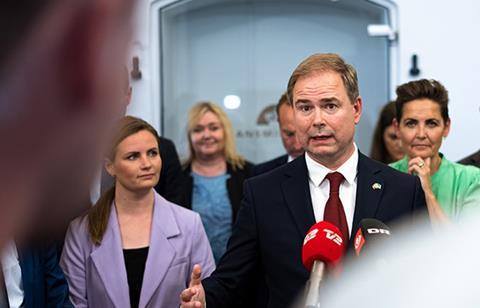 “With the green fund, we are drawing a thick line under Denmark’s towering ambitions for the climate.”

But it said the expected fiscal revenue depended on the uptake of the alderspension, and to support its use and make sure it could be used to a greater extent by providers, the parties to the agreement noted “that the government undertakes to propose an amendment to the rules on income set-off in certain social benefits so that payments to the old-age savings no longer give rise to set-off in these at the time of payment.”

Unlike some other types of pension savings plan in Denmark, contributions to alderspension plans are not tax-deductible.

The government said it would talk to the pensions industry as well as to Udbetaling Danmark – the ATP-run benefits payment agency – to clarify whether the changes could be implemented by 1 January 2024.

Kent Damsgaard, chief executive officer of IPD, said: “We are really positive about the creation of a green fund, and at the same time the financing is good, and well thought out.”

It meant more ordinary employees could get more out of saving, and at the same time, more money would be released for the state to bring about green investments here and now, he said.

He also said the pension sector looked forward to collaborating on investments in green technologies that would be promoted via the new green fund.

“The agreement is not only good for the climate and Denmark’s green transition,” Damsgaard said.

“It also means that politicians are following up on the Pension Commission’s recommendations and ensuring that pension customers’ wallets are not penalised and set off against social benefits when paying into old-age savings,” he said.