​Danish pensions lobby revamps to get to know members better

In the changes, which are part of the IPD’s “Strategy 2025” adopted by the supervisory board at the end of 2019, the lobby group said it would create a new department to focus on getting to know individual member companies better in order to meet membership needs more closely.

Kent Damsgaard, IPD chief executive officer, said: “Our most important task is to create value for our member companies, so that they each have the best framework for creating good solutions for their customers and members.”

He added that this was how the pensions industry could best serve society, both in relation to individual security and on broader issues such as the green transition.

“At the same time, we are clarifying the division of responsibilities within each of the two areas, and making the organisation flatter. We want to be clearer in our priorities, work more flexibly and be faster in our decision-making processes,” said Damsgaard, who came to head up the organisation at the beginning of September.

Under the new setup, the interest representation area consists of five departments – four political departments and a cross-organisational analysis department. Member services, meanwhile, comprises four departments and an IT and digitisation department, which serves the whole association, IPD said. 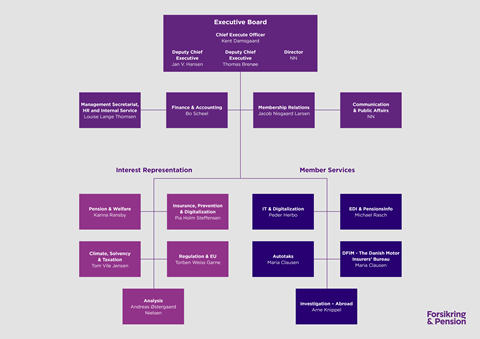 IPD said it had appointed Jacob Nisgaard Larsen – who previously worked as the lobby group’s director of digitisation and development – as deputy director to head up the new department.

“We must better understand what each company is strategically concerned with, and we must have a stronger focus on how we can create the best possible overall value for each individual member,” said Damsgaard.

The restructuring was about improving the dialogue between IPD and its individual member firms, he said, and also about modernising and strengthening its structure.

IPD first announced its new “Strategy 2025” in February, when it said its objective was to make the Danish pension sector “known for its contribution to solving some of the biggest challenges facing Danish and international society.”