The average funding ratio of a Dutch pension fund has hit 110% for the first time in three years at the end of September, according to figures from Aon and Mercer.

The rise in funding ratios in September, up from 109.4% the previous month, was entirely attributable to a rise in interest rates. The 20-year euro area spot rate rose by 23 basis points to 0.19%.

As equity market sentiment turned negative over the month, all asset classes apart from commodities were a drag on funding ratios.

The so-called policy funding ratio, the average funding ratio of the past 12 months, of a typical Dutch pension fund moved up to 105%.

This is the magic threshold above which Dutch pension funds will be allowed to index pensions under the transitionary financial assessment framework which is expected to come into force in 2023.

As a consequence, indexation could again become a possibility for a growing number of pension funds, as reported earlier this week.

Pension funds typically decide in November or December whether they will index pensions in the year ahead. “Therefore, indexation has not yet been on the table for our clients,” said Marc Heemskerk, a pensions actuary at Mercer. 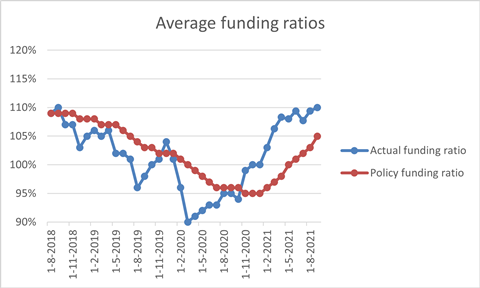 Frank Driessen, chief executive officer at Aon’s Retirement Solutions, said the future direction of funding ratios is highly uncertain given the recent equity market turmoil and the possibility of rate hikes in the US next year.

“But the pressure to index pensions is high after so many years without indexation for most pensioners,” he noted. “So it will be very difficult for a pension fund to forego indexation if they are technically allowed to increase pensions.”

De-risk or up risk?

The higher funding ratios also provide room for pension funds to adjust their investment policies. “Pension funds could use a more comfortable financial position to de-risk in the run-up to the upcoming pension switch by increasing their interest rate hedge or increasing allocation to inflation-linked assets,” said Erik Beckers of consultancy First Pensions.

But for now, pension funds will continue to sit tight, Heemskerk expects. He said: “There’s still too much uncertainty about the timing of the pension changes and the minimum funding ratios needed for a smooth transition.”

Heemskerk expects pension schemes not to make any changes to their investment policy based on improvements in their funding ratios until they have decided how they will make the transition to the new pension system.

So far, only a handful of funds have made a choice for one of two contract types in the new defined contribution system. Other funds, mainly corporate schemes, are yet to decide whether they want to separate existing pension rights from new accruals by keeping the former in the old defined benefit system.