The trustee for speciality chemicals company Evonik’s four UK pension schemes has agreed a £544m (€448m) full buy-in with Legal & General as part of the insurer’s second global pension risk transfer transaction, according to an announcement from the insurer today.

Completed in December, the deal secures the benefits of over 3,600 members in the UK defined benefit schemes.

It builds on a $93m “lift-out” completed by Legal & General for the US Evonik Corporation Retirement Plan in September. A lift-out is an insurance solution offered in the US where a subset of pension scheme members are “lifted out” and transferred to an insurance company.

According to Legal & General, the UK buy-in deal was completed within three months of initial discussions, with the trustee, following advice from consultancy LCP, merging its four UK pension schemes to facilitate the transaction.

Charlotte Quarmby, partner at LCP, said the consultancy identified that a full buy-in could be achieved by all four schemes if they were taken to market together.

Stefan Hentschel, global head of pensions at Evonik, said: “The company is pleased with the US and UK transactions, which provide certainty for the members’ pensions with a strong provider and reduce the financial risk to the sponsor. We were able to leverage the relationship and work effectively with Legal & General to complete both transactions and de-risk the schemes in 2020.” 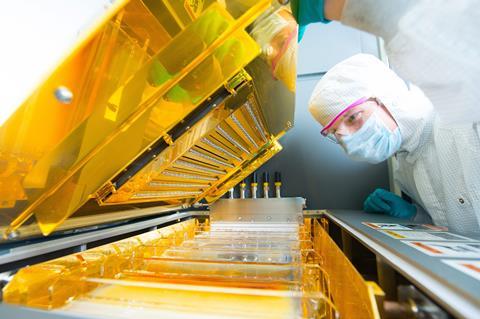 An Evonik employee carries out a quality check

“By working closely with the sponsor and our skilled advisers, the trustee was able to move quickly to secure a positive outcome for our members,” he said.

John Towner, head of new business at Legal & General Retirement Institutional, said the insurer continued to see high demand for pension risk transfer transactions in both the US and UK, and “we look forward to helping more global businesses on their de-risking journeys”.

The Evonik buy-in is the second bulk annuity deal to be disclosed this year, following a £30m transaction for the Marie-Curie scheme. The latter was agreed this year, however, while Evonik’s is left over from 2020.