The governor of Iceland’s Central Bank, Ásgeir Jónsson, has called for greater foreign investment by Icelandic pension funds and for the current 50% ceiling for foreign assets to be raised.

The country’s pension funds total assets broke the ISK6,000bn (€40bn) mark in March this year, according to Seðlabanki Íslands, the central bank – which is almost 200% of GDP.

Roughly 34% of total assets are currently invested abroad, so just increasing allocations to 50% would imply a shift of around €6.5bn from domestic holdings. Much of this could be handed to international asset management firms.

Icelandic pension funds refrained from buying foreign currency in 2020 during the COVID crisis when the króna was weak.

Speaking at an IPE event in Reykjavik, the governor sketched out the dilemma facing the Central Bank in managing the domestic economy. He also acknowledged the effects of currency fluctuations on pension funds’ own balance sheet valuations, which must be reported in króna, as well as in timing foreign investments.

“For the Central Bank of Iceland it is a huge task to stabilise these fluctuations in the currency market. It can be quite challenging because if we lean in on the currency market, if we start to buy foreign currency to prevent appreciation, we are injecting money into the financial system and are basically creating new money, which the banks will then lend out.

“We don’t really need larger foreign exchange reserves than we already have. And as soon as our exports recover after the COVID crisis we really do need to lift the cap on the pension funds’ international investment.”

In comments following his conference address the governor added: “Really the 50%, which is basically the maximum, should be the minimum, particularly if a return of tourism leads to further current account surpluses.” 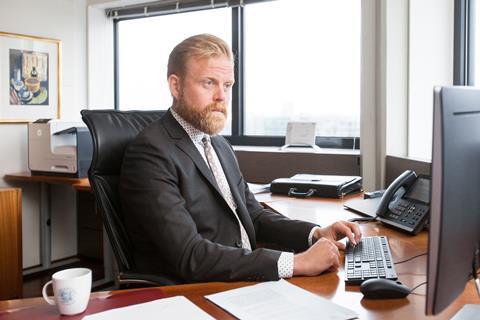 “Really the 50%, which is basically the maximum, should be the minimum, particularly if a return of tourism leads to further current account surpluses”

Jónsson also called for greater foreign investment in Iceland. This could include future infrastructure projects.

Here, HS Orka, a geothermal and hydro power plant with 184MW total capacity could serve as a template. It is 50% owned by London-based Ancala Partners and 50% by Jarðvarmi, a dedicated investment vehicle owned by the largest domestic pension funds.

The governor also called for enhancement of the domestic corporate bond market to broaden lending away from bank balance sheets.

However, the governor said some companies are too large to be effectively served by domestic banks.

“Some of these companies have been getting direct funding from abroad, from Norway for example, but I think it would be much healthier if these companies would be able to issue corporate bonds in the domestic market, and that has been happening to some extent.

“I think it would be very good for the bond market to have foreign investors. Markets are a place where investors express their opinions and we need diversity to ensure efficient outcomes.

“We need many kinds of investors and I think that if we had more foreign investors we would be able to have more efficient markets in many ways.”

The monetary policy committee of the Central Bank of Iceland raised its policy rates by 25bps to 1.5% at its meeting on 6 October, joining Norway, New Zealand, South Korea, Brazil and Mexico in recent rate hikes.