In response to a recent report published by Greenpeace accusing Swiss Pensionskassen of a lack of commitment to stop deforestation, several Swiss pension funds have countered the claims by citing various strategies and actions they have in place, including engagement programmes to contain the consequences of companies’ business activities on deforestation. They hope that results achieved so far would have a ripple-effect, encouraging further action to address the topic.

Members of the Ethos Engagement Pool (EEP) International decided last November to add biodiversity as a fourth pillar to their engagement activities for the coming years, next to climate change, governance, and human rights.

“As part of this new pillar, members of EEP International have validated a new engagement campaign focused on the mitigation of deforestation in the soy and beef value chains,” Vincent Kaufmann, chief executive officer of the Ethos Foundation, told IPE.

Ethos summarised and published its expectations for companies exposed to the risk of deforestation in an engagement paper in September 2021, and subsequently launched the engagement campaign focused on the mitigation of deforestation by engaging seven multinational companies.

“These companies were selected after a detailed analysis of a large universe of companies based on their exposure to the risk of deforestation, but also on their position in exposed value chains, to encourage them to implement concrete and measurable actions to stop the destruction of forests,” Kaufmann added.

Ethos now hopes the engagement with the seven companies will trigger changes at further companies, for example with retailers pushing their suppliers.

Depending on the success of this first phase of the engagement on deforestation, Ethos and the members of the EEP International will decide whether to expand the campaign to other companies.

“In the meantime, Ethos and the members of the EEP International have also started to support collaborative engagement initiatives aiming to mitigate deforestation such as the Investor Policy Dialogue on Deforestation (IPDD) initiated by the Tropical Forest Alliance,” Kaufmann said.

Moreover, Ethos addresses deforestation and other biodiversity issues in its regular dialogue activities with Swiss listed companies, it said.

The Swiss Association for Responsible Investment (SVVK-ASIR) is currently engaging with eight companies directly complicit in deforestation, among them some mentioned in Greenpeace’s report.

“We also address violations of smaller, local companies, which fall outside the MSCI World scope of the report. Within the group of the most invested global companies, the violations mainly occur in the supply chain – this means companies, knowingly or unknowingly, purchase from suppliers that have grown their produce on illegally deforested lands,” Tamara Hardegger, managing director of SVVK-ASIR, told IPE.

There are companies already committing to a no-deforestation policy, but often they fail to implement the policy. 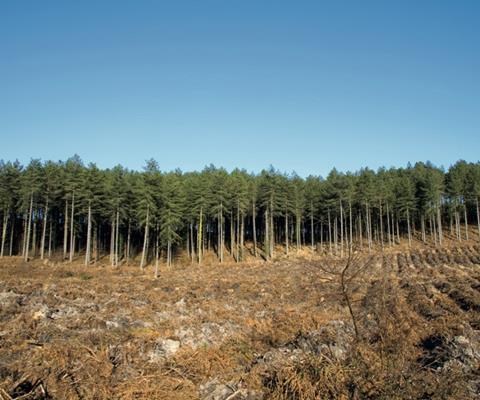 According to a Greenpeace report, Pensionskassen invest at least CHF60bn in listed companies with an impact on deforestation

SVVK-ASIR asks these companies to demonstrate how they investigate allegations, identify non-compliant suppliers through monitoring, and systematic tracking, so that firms know whether they source from illegally deforested land and stop the practice.

“This is not an easy achievement, but we see progress. One of the mentioned companies [in the Greenpeace report] now monitors 100% of directly sourced farms, up from 90% last year, well ahead of its peers, and has sought third-party verification of the traceability to farms,” Hardegger added.

According to the report published by Greenpeace Switzerland, Pensionskassen are investing at least CHF60bn (€61.6bn) in listed companies having an impact on deforestation of tropical forests with their activities.

The sum invested in stocks of companies contributing to deforestation globally corresponds to around 5% of total assets held by Swiss pension funds.

Process and due diligence

The report found that Pensionskasse Post and Basel-Landschaft (BLPK) pension fund hold more than CHF500m in companies representing a high risk of deforestation, while the pension fund for the Swiss retail and wholesale company Coop-Gruppe (CPV/CAP) invests several hundred millions of Swiss francs.

Pensionskasse Post has replied to a request for comment via SVVK-ASIR, whose members also include the pension fund of the canton of Zurich (BVK), compenswiss, comPlan, Publica, and BLPK, among others.

Roman Denkinger, head of asset management at ComPlan, told IPE that the scheme screens for firms that “severely and regularly violate the UN Global Compact”. When that is the case, the scheme steps up with SVVK-ASIR’s partner Sustainalytics to start an engagement process. “If the engagement is not fruitful, the company may end up on the exclusion list of SVVK-ASIR,” he added.

Companies are contributing to deforestation around the world with their production processes, supply chains, products and services, Greenpeace’s report said, adding that the financial industry plays a key role in companies’ transition to a sustainable business model.

“Thus, the Pensionskasse of the TX Group makes sure that investments comply with Swiss standards and laws, also with regard to sustainability. All securities are managed by asset managers that are members of the Swiss Sustainable Finance Association and/or have signed the United Nations Principles for Responsible Investment (UNPRI),” Grossi added.

The majority of asset managers now have their own research processes on sustainability and integrate relevant criteria in various forms in their investment process, the CEO said.

According to Greenpeace, pension funds hardly use their ownership rights to change the potentially harmful behaviour of companies, delegating engagement activities to organisations such as the Ethos Foundation or SVVK-ASIR.

Greenpeace said SVVK-ASIR does not have a specific programme to stop deforestation, and it is not clear if or how deforestation is part of the association’s engagement programme overall.

“Unfortunately, Greenpeace didn’t approach us for verification. Deforestation is a severe violation of our normative basis and international standards. Therefore it is addressed as part of our Standards-Violation engagement programme,” Hardegger said.

Hardegger also noted that deforestation was also “hiding” in another of the association’s current focus topics: child labour in the cocoa supply chain, which will de addressed in a forthcoming report being published this month.

Ethos has published clear and targeted demands regarding deforestation in its international engagement programme for seven companies out of the more than 140 companies held by Swiss pension funds in their portfolios reprising a risk in terms of deforestation, Greenpeace said.

“Deforestation is obviously a very important issue for Ethos and the members of its engagement pools, but as a smaller research house we must also be careful with our resources and ensure that we address as many material issues as possible in our dialogue and activities with listed companies,” CEO Kaufmann said.